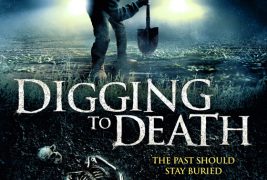 Author/ journalist George Horace Latimer (1867 -1937) once said, “It is good to have money and the things that money can buy, but it’s good too, to check up once in a while and make sure you haven’t lost the things money can’t buy.”  This quote is an appropriate segue into my review for writer/director Michael P. Belvins’s latest offering called, Digging to Death (2021). The plot of which is an entertaining slow-burn about a fella who is struggling financially, but, as luck would have it, he literally stumbles upon something that proves to be life changing…or life ending.

The main character is a guy named David Vanowen (Ford Austin) who seems to be a regular, everyday working man with typical struggles. He’s newly divorced, works for an asshole boss (Clint Jung) who likes to make David’s job as stressful as possible and he’s the father of an adult daughter (Rachel Alig) who needs expensive life-saving medication. On top of all that stress, he purchases a fixer-upper of a home that needs a lot of work done and money doesn’t seem to be growing on trees for David.

The main thing that the house needs is a new septic tank, which David decides to put in himself, despite heeding the advice of a local landscaper (Richard Riehle) who shows up on the property. David lets it be known that he has the know-how to take on such a task because he and his father used to work together doing such things and that by doing it himself it’ll save him some bucks in the long run.

Once David begins to dig up the yard, he unearths a large box and after giving it some thought, he pries it open and finds a large pile of cash (THREE MILLION DOLLARS!!) …and a corpse (Tom Fitzpatrick) right next to it. Naturally, David has a decision to make. Does he call the cops to report what he’s found? Of course not! Thus begins David’s downward spiral into paranoia, madness and other despicable things!

Digging to Death is a refreshingly fun film to watch mainly because of Ford Austin’s performance as protagonist, David. Austin really carries this movie and watching him turn from a mild-mannered guy into a sort of Patrick Bateman/Ash Williams type is worth the wait. Again, the storyline is a slow burn because it takes some time before anything happens. This is more of a psychological thriller, so we watch how and when David begins to break mentally before anything really bloody happens.

Now, Digging to Death isn’t a perfect film since it does have quite a few flaws scattered throughout. For instance, there are several other characters in the film, such as David’s daughter’s boyfriend and David’s best friend, but we don’t really find out much about them, even though they appear in more than one scene and play a part in David’s story. Some of the acting is stiff and the dialogue too simple as it’s mostly comprised of expletives or folks stating the obvious. Because this film also has a darkly comedic aspect to it, the repetitive cursing is clearly supposed to be laughable, but it also gets to be annoying because there’s just so much of it. More dialogue to convey more story detail would have served this well.

Digging to Death has its share of shocks and bloodshed, and it’s just a good time. If you’d like to experience this film for yourself, it’s currently available on VOD and DVD from Uncork’d Entertainment.