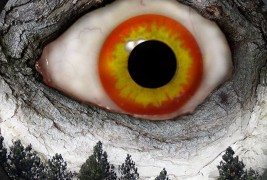 Ron Ford is a talented director and writer with credits like The Crawling Brain, Hollywood Mortuary, The Fear, and many, many more. He’s an accomplished actor having both stage and screen experience. His most recent feature, Game Camera, is currently making the rounds at festivals and will hopefully be available to the public soon.

Game Camera is a found-footage style film, which is not my favorite style. The first time I saw the style used was when I saw The Blair Witch Project at the theater. It annoyed me then and I’ve never tolerated it since. In Game Camera, however, the style is used very effectively. Instead of a shaky hand-held home-movie look throughout, the camera is fairly steady with the few camera-conscious moments adding to the story. So, for me, Game Camera is arguably the best example of the use of the found-footage style as I wasn’t painfully aware of the camera at every moment, and I very much appreciated that.

The film takes place during a hunting trip during which a group of hunters (and one documentarian) discovers some unusual activity out in the woods including a game camera with some creepy footage on it. Things get weirder and worse until the situation takes a horrific turn. It’s based on a short film made by the same group, but this version’s definitely pumped up a notch in quality and tone.

The best part of this film—besides the use of the camera—is the cast. The actors all seem very comfortable with their characters. They have a definite chemistry with each other. In fact, the scenes depicting just the men in the woods give the film a sense of realism and depth that’s lacking in some of the other scenes. I wanted to see more material featuring those characters.

I’m a fan of low budget aesthetics. However, another problem for me with Game Camera is that the technical quality and acting talent is high-level and the effects, while not terribly low-budget, are not realistic. The realism in the interaction between the actors is a startling contrast to the effects. If you’re someone who can get past that and some tonal inconsistency, you’ll have no problem enjoying the film.  I certainly did.

I would love for a big chunk of money to be given to these guys so I could see what they would do with it. I hear that Ron Ford is again teaming up with actors Tom Streeber and Brad Picard for a new short film. Either way, I’m looking forward to seeing what these guys come up with next. 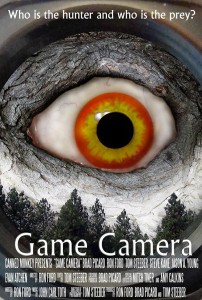