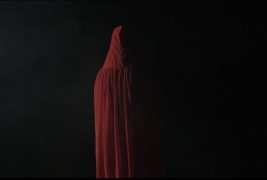 Made in 13 days and for $8000, writer/director/producer Joe Badon’s The God Inside My Ear is a darkly funny, highly trippy and just flat out weird tale. About what, you ask? Well, THAT is the million-dollar question.

It might be about a breakup between an oddball guy and his oddball girlfriend, and all of the emotional bullshit that follows. It might be about gods and demons and other spiritual beings that are trying to help or control a vulnerable girl. It could even be about lost souls trying to find their way home. Or, it just might be a strong message about mental health. Anyway, the point is that this isn’t your run of the mill horror film. Some would argue that this film doesn’t even fall into the horror category, that it’s more of a psychological mindfuck. Where do I think this film belongs? Well, kick back, drop a dose and let’s find out.

TGIME starts off simply enough. We’re treated to some odd visuals of what seem to be random things in no particular order. We then witness an awkward breakup between Fred (Joseph Estrade) and Elizia (Linnea Gregg), thanks to Fred’s finding God…or something like that. The breakup seems to send Elizia into a psychotic break as after this event—and a couple of other happenings—she begins to see and hear things that range from the comical to batshit insane.

Along the way, we meet a couple of recurring characters once we fall down the rabbit hole with Elizia. One is a creepy random repeat caller, who’s referred to only as The Telemarketer, and strangely knows more than he should about Elizia. There’s also a nosey, intrusive neighbor, who’s comparable to Minnie Cassavetes in Rosemary’s Baby. Did I mention that there’s a talking dog, and a possibly demonic gnome named Mister Stuffy Bottoms that come into play? I think I should tell you now, that there is a pretty horrible scene involving the talking dog that animal lovers won’t like.

Moving on, Elizia has a few concerned friends who show up every now and then who try to help her out in their own ways, but their attempts don’t really help. Essentially, the remaining story goes in a hundred different ways and by the time it’s over, it still doesn’t really make a whole hell of a lot of sense. I mean, I guess it kind of does, but I was left with a LOT of questions at the end.  The biggest one being…what the fuck did I just watch?!

In wrapping this all up, for as confusing and full of holes as The God Inside My Ear is story-wise, it’s a gorgeous film to look at. However, there are some scenes that use a strobe light effect, so if you’re sensitive to such things, take note. Also, the acting isn’t the greatest, but Linnea Gregg is fun to watch as she experiences all of the weird shit that happens to her.

My final opinion of The God Inside My Ear is that it’s a modern, over-the-top arthouse film. It’s certainly not a film for everyone, but for those who are looking for something different from the norm, I’d definitely recommend giving it a watch. I think it’s a film in which everyone who watches it will find something different to take away from it, as there’s no real cut and dried.  Is this a horror film? Well, there are horrific elements strewn about, but the overall feel isn’t that of a typical horror movie. There’s little gore, and most of the horror is psychological, but it does have a few legit disturbing moments here and there.

Joe Badon shows a lot of promise as an up and coming filmmaker. I’d like to see what else he and his team can come with in the future. TGIME is currently making the film festival rounds, so if you get an opportunity to catch a showing, let me know what you think!