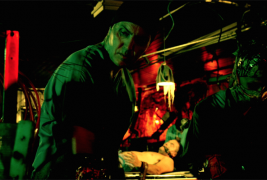 In The Harrowing, director Jon Keeyes delivers a protracted opening that begins as intriguing cop drama and ends as cannibalistic camp. The former is fascinating; the latter is ludicrous.

But in good time, the two somehow are effectively intertwined, turning what might have been a total disaster into a crime thriller that pulsates with tension and intrigue. That’s not to say this is grade-A stuff, but it has its moments.

Detective Ryan Calhoun (Matthew Tompkins) is wrestling with demons, having seen his former vice partner gunned down while doing undercover work on a child pornography case. He’d left him alone momentarily when all hell broke loose.

He’s tried to put that behind him and, soon enough, is working on breaking up a prostitution ring when lightning strikes twice. He and his partner/best friend, Jack (Damon Carney), are joined by another cop, Roy Greenbaum (James Cable). Greenbaum gets a little too personal for Jack’s taste while razzing Calhoun about losing his other partner, creating a bit of a snit fit.

Calhoun tries to calm things by heading out on a coffee run, but by the time he gets back … well, the snit has hit the fan. Greenbaum has gone nuts, mutilating a prostitute who had been working with the cops and killing Jack. Worse, when Calhoun finds them, Greenbaum is chowing down on Jack’s innards. He sees Calhoun and walks toward him, muttering something about demons. Calhoun guns him down.

Enter Calhoun’s superior, Lt. Logan, played by venerable character actor Michael Ironside. Logan has issues with the detective and puts him on leave, demanding his gun and badge. This sends Calhoun home to wife Anne (Arianne Martin), who, while a comforting soul, also makes it clear she’s had enough of this police business. Nonetheless, Calhoun does a bit of independent sleuthing via the internet and discovers that Greenbaum had spent some time at a psychiatric facility. This leads to another meeting with Logan, who is convinced to let Calhoun go undercover once more to try and piece together the ghastly goings-on.

This is where The Harrowing takes a final turn toward the occult. Working undercover as a patient, Calhoun soon runs into other internees who talk quietly of demons and the work of the facility director, Dr. Franklin Whitney (Arnold Vosloo). Through what we’re led to believe are Calhoun’s hallucinatory nightmares and flashbacks, it appears Whitney is evil incarnate, using his patients for some ill-defined but bloody horrifying purpose.

As psychological mysteries go, this flick has some kick. Tompkins nails his part both as macho cop and terrified patient. Ironside is his usual dependable self and Vosloo, probably best remembered for The Mummy (the one with Brendan Frazier, not Tom Cruise), is at once creepy and charismatic. Two other patients — Hayden Tweedie as Ella and John Walpole as Karl — milk the most out of their screen time.

All, unfortunately, are hamstrung to some degree by dialogue that veers from snappy to stilted. While Keeyes gets credit for directing this cast, he gets some blame for the script, too, since he wrote it. He also deserves a healthy dollop of flack for a pace that, at least initially, is so plodding you can stream this uninterrupted, take a bathroom break, and not miss a plot point.

The Harrowing also boasts special effects that aren’t so special, and it was shot with a blue tint reminiscent of Zach Snyder’s work in the DC Universe. And that’s not meant as a compliment.

Finally, there is a twist in this that can be seen a mile away. To be fair, that’s not unusual for movies of this nature, and the cast is competent enough to earn your forgiveness.

Available now on VOD, The Harrowing is a fair-to-middlin’ movie experience. Kind of like a stick of gum, you’ll savor some of it. But it won’t last. 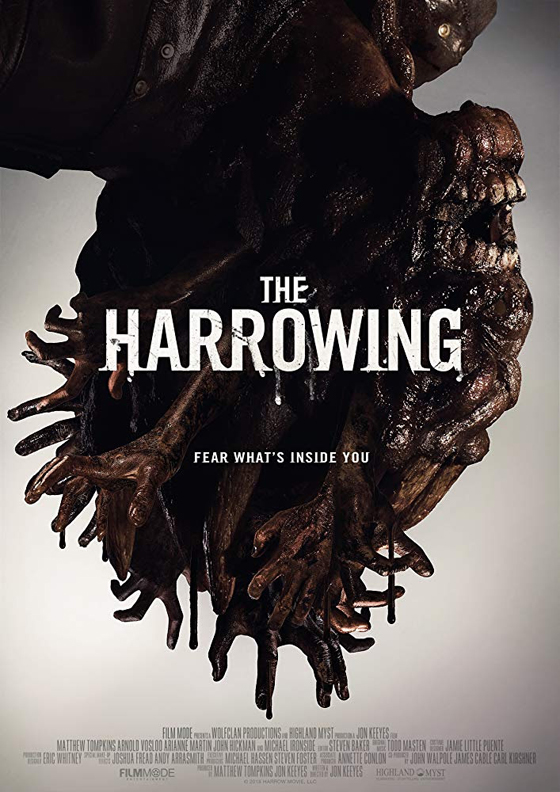