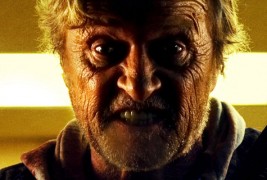 Hobo with a Shotgun, directed by Jason Eisener and starring Rutger Hauer in the titular role, looks, sounds, and plays exactly like what it’s emulating – an exploitation extravaganza circa the early 1980’s.  Having originally been made as a fake trailer for the promotion of the Quinton Tarantino and Robert Rodriguez throwback vehicle, Grindhouse (2007), Hobo with a Shotgun is that film’s second faux trailer to become a feature, following Machete (2010).  Simply put, it’s a blood-stained, trashy roller coaster that’s one hell of a fun ride.

As the film begins, a hobo (Hauer) rides into town on a freight train boxcar and past a sign stating, “Welcome to Hope Town”, rechristened “Scum Town” by a cynical graffiti artist.  Hope Town is a dismal urban nightmare, crawling with punks, junkies, and criminals wreaking havoc on everything and everyone.  Hobo soon stumbles upon a malicious spectacle: The Drake (Brian Downey), a crime lord who has the entire city under his thumb, and his two deranged sons, Ivan (Nick Bateman) and Slick (Gregory Smith), executing The Drake’s brother Logan in front of a crowd of apathetic onlookers and in glorious gory fashion.

Later, as Hobo panhandles to earn enough money for a $49.99 lawn mower in the local pawn shop – his ticket out of poverty, he spots Ivan and Slick and decides to follow them.  Inside a club, the brothers brutalize a kid named Otis who owes them money.  Abby (Molly Dunsworth), a hooker with a heart of gold intervenes which makes Slick decide to kill her for her troubles.  Fortunately for Abby, Hobo saves the day, knocking out Slick with a sock full of coins – a bum’s weapon of preference, and dragging him to the local police precinct.

At the precinct, the cop plays Hobo for a fool, setting him up for Slick and Ivan’s vengeance routine.  Outside, the sadistic brothers viciously beat Hobo and carve the word “Scum” into his chest before leaving him for dead in a dumpster.  However, karma pays off in spades, especially in the movies, when Abby rescues Hobo, taking him back to her apartment, cleaning him up, and forging a mutually needed friendship.

The next day, Hobo is bound and determined to buy that lawnmower.  He finds a notorious sleazy filmmaker who pays bums to degrade themselves for money while he films them (based on the real life, disgusting exploits of the infamous Bumfights DVDs).  Hobo proceeds to do an assortment of things such as eat glass, eventually earning enough for the coveted mower.  Bloodied and humiliated, Hobo makes his way to the pawn shop, but as he’s about to buy the mower three armed robbers storm the place and threaten the customers – a mother and her infant son, as well as the shopkeeper.  Hobo removes a shotgun from the wall and dispatches the would-be robbers.  Afterward he has an epiphany: Hope Town needs a vigilante.  Hobo buys the shotgun instead of the lawnmower and just like that we’ve got an awesome exploitation flick on our hands.

Hobo goes on a rampage blowing away the criminal scum and the victimizers that plague Hope Town.  He becomes an instant hero, much to the chagrin of The Drake.  After feeling his hold on Hope Town wane in favor of the vengeful vagrant, The Drake sends Ivan and Slick on the hunt for the new hero.  The brothers storm a news station and implore the viewers to obliterate all hobos and vagabonds, causing mobs to spring forth and join their cause while creating a split in the public’s loyalties.

The film’s final act is an action-packed, gore-soaked descent into weirdness, involving the use of modified yard maintenance tools and hunting implements (A nod to Evil Dead), as well as two demon-like, ironclad storm troopers on motorcycles, Rip and Grinder, known collectively as The Plague, providing the film an inexplicable, but wholly enjoyable dollop of the supernatural.  Most of all, we’re bestowed the pleasure of sitting on the edges of our seats watching to see whether or not our Hobo hero and his gal-pal Abby can rid Hope Town of its malicious pestilence otherwise known as The Drake, once and for all.

Hobo with a Shotgun pulls off quite a trick – it’s a good movie masquerading as a bad one.  This starts with John Davies’s script and relies heavily on its outstanding cast and visionary directing by Eisener.  The movie features purposely “bad” dialogue in faithful reverence to the movies it’s imitating, movies that feature accidentally bad dialogue.  However, the ostensibly bad dialogue is just that, an aesthetic ruse concealing a structurally rock-solid story and a script rife with subtext that can only be articulated by actors with real chops.

The principal cast members, namely Rutger Hauer and Molly Dunsworth carry on their shoulders the successful execution of this experiment, walking a tightrope between exploitation trash, and nuanced drama to convey a story that has almost as much heart as it does gore.  Hauer, who frequently used to star in the types of movies to which this one pays homage, turns in a brilliant and dynamic performance.  Sometimes angry, sometimes compassionate, and always trying to do what’s right, Hauer’s Hobo gives this film its heart by providing an oddly believable antihero for us to get behind, and one that generates legitimate empathy.  Dunsworth’s Abby is the perfect dance partner, exhibiting many of the same qualities as Hauer’s character, fulfilling the role of Hobo’s soul mate, another lost Saint stuck in the gutter and looking for a way out.  The phrase, “two peas in a pod” is an appropriate one.

The rest of the cast play archetypes, roles designed to be so over-the-top as to render them exploitation cartoon characters, and they do so with gusto.  This in effect funnels the realistic human elements of the story toward Hobo and Abby, our conduits into this world.  It provides us a stable anchor to the story by making the various silly and surreal elements more palatable and a lot less able to shatter our suspension of disbelief.  This design is the engine that propels us through the movie in a blaze and allows Hobo with a Shotgun to succeed as something more than a superficial splatter fest which is something Robert Rodriguez’s Machete was unable to do.

Technically, Hobo with a Shotgun is a dead ringer for the era it’s evoking.  The colors are oversaturated and the contrast is on overload.  As we progress through the movie the palette shifts to a neon nightmare-scape, emphasizing inky blacks lit with hot pink lights and other neon atrocities, creating even more dramatic contrasts and contributing to the film’s surreal visual compositions.  The editing style, also courtesy of Eisener, is a faithful throwback to the film’s exploitation predecessors, particularly during the many sequences that feature ultra-violence and the resultant practical gore effects.  And tying it all together, the soundtrack is full of synthesized drums with foreboding synth-bass passages and other weird 80’s flourishes, ala Escape from New York and similar films.

Hobo with a Shotgun doesn’t have many weaknesses.  Although, to fully appreciate it, it helps to first have an appreciation of the positive attributes possessed by the awesomely trashy film’s this aspires to be.  If you can’t find a redeeming, enjoyable element in films like Death Wish, the aforementioned Escape from New York, and the Dirty Harry canon, then you may be blind to the clever film lurking beneath the blood-stained exploitation skin here.  Occasionally this film approaches the line of acceptable goofiness, but never crosses it egregiously enough to negate its successes or jar us out of our investment in the story.  Hobo with a Shotgun is good, nasty fun and a good deal more craft than meets the eye.