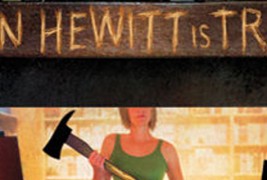 Madeleine Roux’s first novel, Allison Hewitt is Trapped is a zombie book with brains.  Not the kind that satiate the story’s hungry horde of walking dead, but rather the kind that manifest from an author who respects the intelligence of her readers and whose writing chops are sharper than the axe wielded by the book’s titular character.

The story is told in a series of blog entries written from Allison’s first-person perspective.  When the story opens, Allison and her coworkers are trapped inside the Madison, Wisconsin bookstore at which they all work.  The city’s been overrun by zombies and as Allison soon finds out via comments on her blog, many other cities around the country and eventually around the world are devastated as well.

Allison describes the difficulties of tasks we all take for granted, such as eating, going to the bathroom, and even keeping one’s mind occupied.  There are also the obstacles presented by having to live in close proximity to people she probably wouldn’t bother to hang out with outside of work under normal circumstances.   To complicate things a bit more, Allison rescues a stray dog which compounds the aforementioned issues.

Soon the group’s tasks broaden and with them so does the scope of the story.  The first step is the decision to move from the confines of the bookstore to the more habitable apartments upstairs which are rife with their own unique perils and surprises.  Shortly after the group settles into the apartments Allison receives a message from her mother saying she’s coming to find Allison.  Then a voice breaks through the radio static, beckoning survivors to a safe zone about ten blocks away.  Allison decides to go, hoping that her mother will find her there.  At the safe zone, Allison meets Collin – the voice on the radio, as well as several other new characters, but unfortunately there’s no sign of mom.

It doesn’t take long for Allison to settle into a new routine, but as the safe zone fills up things become unstable.  Events come to a head in shocking fashion, shattering Allison’s temporary sense of security and changing her outlook on her friends, her family and her future.  With a renewed determination to find her mother, Allison leaves the safe zone and heads toward a fortified colony in Colorado called Liberty Village.

Allison Hewitt is Trapped is part coming-of-age story and part road story in which the journey from the bookstore in Wisconsin to Liberty Village in Colorado and the people we meet and lose along the way paint a picture of hope and redemption on an incredibly bleak canvass.  The contrast is fascinating and nothing short of special. 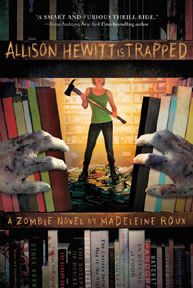 Stylistically, Roux’s book is appealing on many levels.  First, the chapters are short which leads to a convenient, quick read.  I’m not a fan of putting a book down in mid-chapter and I was able to devour Allison Hewitt is Trapped in bite-sized chunks as the opportunity presented itself throughout the day.  I’m also impressed with Roux’s deft inclusion of organic cliffhangers to end each chapter.  It thrusts this book into page-turner territory.  Moreover, each chapter is followed by a series of comments from other bloggers (remember, each chapter is a blog entry from our heroine) who are also trying desperately to survive the zombie apocalypse.  Some of these comments offer suggestions, while others subtly deliver exposition.  It’s a brilliant device by Roux that operates outside of the story proper, providing us information without having to remain contiguous with the events and tone of the chapters these comments follow.

Authors tend to fall into one of two categories.  In one category reside the wordsmiths, the writers whose prose are filled with elevated language of the floweriest kind.  They could describe opening a soda with the poeticism and grandeur of Shakespeare, but their storytelling skills are either obscured by pretension or they’re nonexistent.  In the other group, and on the other side of the spectrum, dwell the writers whose stories are innovative, compelling, and brilliant, but their textual representations of those concepts leave a lot to be desired.  However, Madeleine falls into the third and smallest group of writers – those who possess both the ability to compose appealing prose and the ability to spin a yarn like nobody’s business.

Allison Hewitt is Trapped never stays too long in one place, darting from the colloquial to the poetic, from the funny to the poignant, from the introspective to the action-packed, and from horror to adventure – its motif is its dynamism.  For example, there are no lily white or jet black characters.  The differences between who’s good and who’s bad are fluid and even our heroine does reprehensible things in certain contexts.  Roux’s awareness of this is borne out in both the prologue and the epilogue and used for a little social commentary – something all good zombie stories have included since George A. Romero accidentally detonated a sociopolitical zombie bomb back in 1968.

And I’d be remiss if I didn’t discuss the following: Regardless of any messages about gender one may glean from the book’s text, Allison Hewitt is Trapped grades highly on its merits as a successful work of fiction, independently of its author’s gender and that of its protagonist.  However, the comparisons to other female-centric horror/fantasy books are inevitable.  As opposed to Stephenie Meyer’s Bella, an anti-feminist who, in the time it takes a werewolf to remove his shirt, undermines the genre’s slug-like progress in featuring autonomous female heroes, and Charlaine Harris’s ham-handed characterization of her vapid, navel-gazing protagonist, Sookie Stackhouse, Roux’s Allison is a near perfect representation of a strong, non-objectified female genre protagonist and one deserving exposure.

Allison Hewitt is Trapped has only one flaw and it’s a relatively minor one.  During the course of her adventure, Allison falls in love and this romantic subplot has profound consequences for our girl.  However, we’re not shown enough of the romance’s formative stage to really optimize its emotional payoff.  I would like to have seen this facet of the book developed more completely.  As written, some scenes that should be incredibly moving are rendered a bit impotent.

Madeleine is relatively young for a published novelist and the story behind how her book came to be is sensational.  But make no mistake – she is no novelty act and her book is not propped up by its strange conception and subsequent birth.  Roux is a fantastic writer and Allison Hewitt is Trapped is the proof.

One thought on “Allison Hewitt is Trapped Book Review”