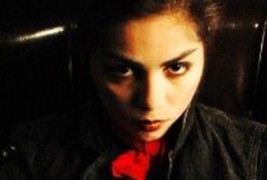 With the glut of crappy remakes to go along with half-baked motives and embarrassingly cheesy acting that have plagued mainstream horror cinema over the last few years, I sometimes wonder what I’ll see first (if I ever witness either at all)- a Chicago Cubs world championship or another big time, Hollywood horror blockbuster to sit alongside Jaws, The Exorcist and the original bad boys of grue (I prefer my Freddy, Jason and Michael to be in their late 50’s in this day and age, thank you very much) on the mantel of the macabre.

But then I find myself meandering around the local video store (yes, some still exist) a few weeks back and after an hour or so of rummaging through the bargain bins and 2-for-$1 rental racks, I was literally jogging back to my apartment with a sack full of goodies, prepared to spend a weekday off in front of the boob tube, feasting on leftover pizza while creatures and psychos on screen feasted on one another.

That being said, I’m a lot more interested in that damn Cubs’ World Series win now that I know the independent horror film scene is in good hands. While one can never top the rush of seeing a truly horrific film on the big screen amidst a hundred terrified strangers, I am here today to respectfully demand that each and every one of you reading this article promptly venture to the local video store or head on over to your favorite website and treat yourself to an allowance for some wildly fun independent horror. 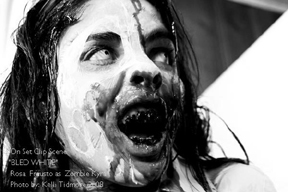 I was fortunate enough to track down another multi-talented indie actress and pick her brains (not literally, of course) on a number of subjects, including her Best Actress win at the Indy Horror Film Festival in March and delve a little deeper into one of my favorite indie horror flicks, “Bled White”, in which she stars.

A veteran of over 15 years in the acting business, Rosa Frausto seems destined to be in the mix for the title of Scream Queen for quite a while. Not only does she celebrate her birthday on All Hollow’s Eve, but she also has several years of professional training under her belt, not to mention being trilingual (I wonder if she knows how to say “holy crap, a zombie!” in French?) and being one of the nicest people I’ve ever had the chance to chat with- the first thing she did upon starting the interview was thank ME for MY time and say some extremely kind things about the friend who led her to this interview.

Even scream queens need a break from the action now and then. The multi-talented Ms. Frausto took a few moments out of some rare R&R time to answer a few questions for her fiendish fan base.

If there is a huge Hollywood horror blockbuster on the horizon, I know one young woman who is more than ready to become this generation’s scream queen.

RavMon:  First things first, congratulations on your Best Actress win for “Paranormal Calamity” at the Indy Horror Film Festival earlier this month. What did the win mean to you, personally?

Rosa:  Thank you so much! It really touched me a lot because I’ve been working as an independent actor for 15 years and I wasn’t doing it for the recognition. To me, it’s just the love and the dedication I have for it. However, I am truly humbled to receive this award because even though I wasn’t looking for recognition, it does help push my career forward and makes me go even further for my family, friends and fans.

RavMon:  You worked with Charlene Tilton on “Paranormal Calamity”. She’s certainly not a newbie to the acting scene. Did she offer any advice or did you take anything out of watching her act?

Rosa:  Charlene Tilton and I had different work schedules so I didn’t get to meet her on set but she did a great job with her character as she is a very experienced actor. So although I didn’t meet her, her performance shows dedication and love so I take that with me moving forward.

RavMon:  Being extensively trained in the art of acting, as well as a laundry list of dance skills, it’s clear you took the time to devote yourself entirely to this career. What led you or inspired you to make such a difficult career your goal? 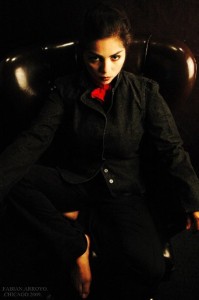 Rosa:   It all happened when I was a junior in high school. I was a business major and my friend was a senior who was a drama major. She wrote a play titled “Rising Star”. She wanted me to audition for this part she had me in mind for. I never acted in my life but being that I’m very outgoing I took a shot and auditioned for it. Got the part and fell in love with acting since. I continued my goals in the business/administrative field to have a fall back plan and then went ahead and took acting classes because I knew I loved it.

RavMon:  You have tackled a number of roles in your career, ranging from horror to comedy to some pretty deep issues (namely “El Dia De Los Muertos” –  a film based on true events in which a gang of suburban teens are killing Chicago’s homeless for sport, leading up to the murder of an illegal Mexican working girl and “Fresh Cut”). Is there a specific genre you feel most comfortable in? If so, what makes that genre so appealing to you?

Rosa:  I played Ana Lucia in “Dia De Los Muertos”, the main victim. As a matter of fact, Ricardo Islas, who is filming “Frankenstien” right now, also directed “El Dia de Los Muertos”. He (Islas) gave me my first lead in this movie and I was so excited because we flew out to shoot some scenes it in Mexico, it was wonderful!

Fresh Cut is a short film that was only premiered at the Detroit Film Festival in March 2010 and it didn’t go anywhere after that. I was a bit saddened because I cut my long hair for this short. No pay. Well gas was paid and food, but I loved the script and I did it anyway. I played a young skin head (Manny) who’s dating another skin head who makes her beat up the man who abused my character when I was a little girl. I do end up killing him by bad influence of my boyfriend because he felt I wasn’t a tough skinhead. The part was originally meant to be played by a boy. The director, Alejandro Rojas, saw me at an audition and changed his mind and decided to cast me instead. The trailer is up on Youtube.

Yes, I’ve taken roles where I usually play a teenager and/ or the victim and I am comfortable with both because I could cry on cue and break down quickly. Playing a teenager and/or the victim is pretty cool because casting directors never know my real age. As long as I’m older than 18 they are happy but it’s cool because they get startled when they know my real age. It’s great.

RavMon:   What actresses in the horror community do you look up to?

Rosa:  Hmmm… Good question.  I don’t really have one. There really isn’t a scream queen in this day and age that I could actually name.

RavMon:  Can’t really argue with that. That being said, what’s your all-time favorite scary movie?

Rosa:  I love this question! I have two favorites and they are “A Nightmare on Elm Street” and “Halloween” [the originals]. I could watch those two forever.  “Halloween” is a must, especially on my birthday, October 31st.

RavMon:  I particularly enjoyed “Bled White”. On such a small budget, what were some of the obstacles the crew faced and what really hooked you onto this project? 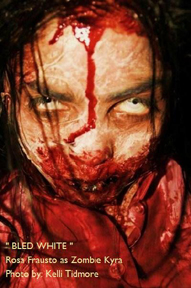 Rosa:  I’m happy you saw it. Thank you! “Bled White” had a lot of obstacles while filming because it was winter and below zero temperatures. I’m talking 20 below, it was crazy.  The hotel my scenes took place in had no heat. We relied on two space heaters. I was only on set for two days and I hardly ate for almost a whole day because I didn’t want to ruin my zombie look. The black teeth, the latex on my face along with blood on my face and body. I wanted to stay in character. “For the love of film”, that’s what I say. That’s the way to get through obstacles when working on independent films.

RavMon:  You have worked with a handful of directors a number of times, most notably Juan J. Frausto, Diane Mejia and Armando Hernandez. Is there one particular director you enjoy working with most?

Rosa:  They are all wonderful directors and I love all the directors I get to work with. However, Juan J. Frausto, besides the fact that he is my brother, is the best director in my eyes because I’ve seen him work since I was a little girl.

RavMon:  To your younger fans, particularly young Latina women who are hoping to pursue a career in acting, what words of advice can you offer?

Rosa:  My advice to them is, start off by doing it all yourself.  Get trained in acting, get all the advice you can, always keep in touch with photographers, look for those auditions out there, colleges especially. Always network as much as possible, go to film festivals, market yourself and stay focused because a lot of giving up will come to mind but don’t stop. And lastly, love yourself and your family always.

RavMon:  What projects are you currently working on? 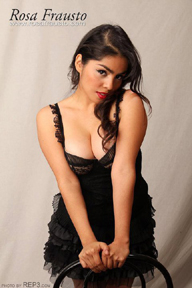 Rosa:  I am ecstatic to announce a film titled “Road Kill”, directed by my brother Juan J. Frausto, has been selected to screen at one of the top festivals in the USA- the Myrtle Beach International Film Festival, April 19-23. “Road Kill” is a film where I play one of the leads. It’s a bloody one too! I also have my first lesbian scene in it.  You can check out the trailer online.

I also just finished working on my first TV pilot directed by Chapman University students in the city of Orange, Ca. It will have its first screening for cast and crew this coming May 2011 which I’m really looking forward to seeing. I’m crossing fingers for it to get picked up for actual TV airing. If it does, I’ll let you know.  Also, there’s another scary independent film project in the talks and I’ve been cast to play one of the leads so that’s another smile on my face.

RavMon:  Keep your eyes peeled for all things Rosa Frausto by checking out her official website, www.rosafrausto.com, join her fan page on Facebook (Rosa Frausto Fan Page – 245 people and counting!) and check out her IMDB page!