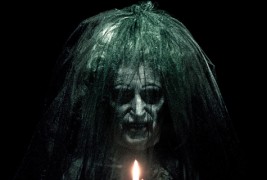 After much anticipation, ceaselessly whetted by ads and commercials that were themselves quite insidious, I was able to watch the film Insidious on its Friday, April 1st, 2011 date of release. When I first began seeing these teasers for it a couple of weeks ago, the imagery and the concept fascinated me, albeit a bit apprehensively. The film comes from the group of people behind the Saw and Paranormal Activity franchises, and although these have been relatively original and entertaining to varying degrees of success, the dread of disappointment did cross my mind; I wondered just how far this team could push their streak of theatrical victories. Ultimately, when I left the theater I felt that although I had indeed been entertained, the high hopes that I had secretly harbored were only partially fulfilled.

The film Insidious is directed by James Wan, co-writer and director of Saw and executive producer on all of the subsequent films within this franchise. Oren Peli of Paranormal Activity and Paranormal Activity 2 fame produced the film and Saw franchise co-writer, producer, and actor Leigh Whannel acted as writer for this film as well as having a small role. Whannel and Wan seem to have been involved in two other films named Dead Silence and Death Sentence, both of which I have not seen, but, if the omniscient internet is to be believed, they aren’t all that good. You can’t win them all, I guess.

When the film starts off the viewer gets the impression what will follow will be a standard haunted house story. Father Josh (Patrick Wilson) and mother Renai (Rose Byrne) have recently moved into a house with their young trio of children, including Dalton (Ty Simpkins), the mostly-indirect protagonist of the film. With the majority of their belongings yet unpacked at the commencement of the film, the young family is attempting to settle into their new environment. Josh is a teacher and Renai apparently makes trite and maudlin songs on her piano, songs that would fit right into any hipster’s iPod playlist for those days when their vintage single-speed fixie has a flat, their venti soy doppio macchiato spills onto their eco-friendly messenger bag, and they’ve been reading too much of The Bell Jar. Requiring more suspension of disbelief than the paranormal events that occur is how they are able to afford such a house and the subsequent pecuniary-draining actions on the salaries of what seems to be a high school teacher and a liberal arts school graduate who hasn’t made it big yet – Housing bubble, indeed.

I’m still not exactly sure what happens next, but, somehow Dalton goes into a coma after a fall from a ladder in the attic –after being led up there through the spooky, supernatural coercion of an automated creaky door– which resulted in a bump on his head but said injury doesn’t actually have anything to do with the coma. After an ominous visit to the hospital where the parents are informed that medical science is at a loss to explain the pseudo-coma, three months pass suddenly when he is brought back to be taken care of at home. During the previous three months which were spent in the hospital it seems as if nothing paranormal happens, or else it’s simply ignored. Perhaps ghosts suffer from White Coat Syndrome, too.

Thenceforth the film develops in the typical fashion of most haunted house fare until the activity becomes too much for Renai and she pleads to an emotionally distant and withdrawn Josh to move away to a new, less haunted home. What seems like a new beginning at a new home is good for a few more jump scares until the revelation –which ends up being one of the creepiest scenes in the film– from Josh’s mother Lorraine (Barbara Hershey) that she had recently traveled to the house during a dream and encountered a demon in Dalton’s room; it then informs her that what it wants is Dalton himself. This is itself not much of a spoiler because the commercials already did the spoiling with their frequent use of the scene where the psychic Elise (Lin Shaye) is heard decreeing that it isn’t the house that’s haunted, it’s their son.

After Lorraine persuades the couple to bring in Elise the medium, it is actually her two assistants that show up, one of whom is Leigh Whannel in a cameo role as Specs in his best John Hodgman imitation. Humor is never lacking in the film and it is especially prevalent with the interactions between this duo. While Tucker (Angus Sampson) inspects the house with the ghost hunting machines of his own creation, he encounters a set of what seem to be badly made-up girls with large grins and empty eyes in what seemed like an attempt to brandish yet another ineffective stereotype. Tucker decides this is quite enough and that it is time to bring in Elise. At this point, things become a little more interesting.

In spite of the occasionally effective jump scares, most of the film seems as incorporeal as the entities on screen because of a lack of real plot development. What appears in the film is mostly a regurgitation of past efforts in haunted house films. Additionally, the movie feels like it is actually two films in one when it seems to change tone and direction partway through, never really living up to the expectations of either one of its halves.

Most of the specters haunting the young Dalton aren’t all that scary or creepy. Apart from the awesome demon thing, every other haunter just seems like a tired old stereotype of a creepy movie ghost. In Insidious the viewer comes across the gothy badman, the vapid but eerily cheerful baby doll dress girls, the ugly crone, among many others. This film also uses a nostalgic golden oldie in that tired horror movie device of making saccharine and bucolic things from a simpler time scary when juxtaposed with a ghost. The demon thing was pretty bad ass, though. Like, for reals, it rocked!

There are a few odd portents sprung upon the viewer right at the beginning which unfortunately, aren’t wholly carried through to the ending. Most of the first part of the film hints at aging, a theme that seems to have been aborted without any further mention. It’s like the creators had a bunch of ideas that they started with but didn’t know where to take them, so they kept them in the film as vestigial plotlines.

In the end, even though the film isn’t anything new and amazing, the experience was itself entertaining. There were even a few moments when I jumped in my seat! Sure, it seems like it’s just a rehash of Paranormal Activity and Poltergeist, but, truly, most things are themselves unoriginal in plot; the execution is what’s important to a fun experience, and this film does just that. My recommendation is to see this film in a large, loud, dark theater with good friends and a big bag of popcorn and just enjoy the thing. You’ll jump a few times and you won’t have to think too much.

One thought on “Insidious Movie Review”