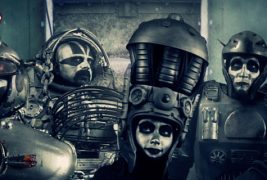 Your old pal Dr. Mality likes to dabble in many branches of science, but robotics holds a special place in my blackened heart. I don’t know how many hours I’ve slaved in the lab trying to whip up nefarious automatons to do my will. The lawn mowing robot was a real disaster and it looks like my descendants a couple of centuries down the line will be making up for that one!

So my attention was drawn to an indie film featuring The Killer Robots!, subtitled Crash and Burn. What manner of mechanical malcontents are featured herein?  Well, my eyes have never witnessed robots like these before…whether that’s a good thing or a bad one, I’m not sure.

First, we need to understand that The Killer Robots! are primarily a musical group and an artistic project as well. They are four humans who have created robot identities for themselves in much the same way that the Antarctic mutants GWAR are the alter-egos of “normal” humans.  We have Auto (aka Sam Gaffin who also wrote and directed), Trog (Charles Harris), Max (Mike McGowan) and Strobo (Sam Williams). As a musical group, they are nowhere near as repulsive or abrasive as GWAR, playing a kind of synth-heavy power pop with a quirky feel.

When it comes to the visual and artistic side of The Killer Robots!, nothing is spared. These mechanical men have whipped up some wildly over-the-top outfits that must be awkward as hell to play music in. Combined with silver and black make-up, these outfits—bursting with outrageous shoulder pads, boots, and chest-pieces—are striking to say the least. And yes, during the course of Crash and Burn, we do see them perform as a band, much like Josie and The Pussycats used to during every one of their cartoons. In fact, the musical performance is central to the plot…such as it is.

For this film, the band has put together a collection of their “robot” friends and created a bizarre action film based on their characters. They created the movie entirely by themselves over a five-year period, filming primarily on weekends. All of the outfits and the vast backgrounds full of ferro-plastic junk are homemade creations using old plastic toys, thrown away tools, and other debris, mixed with computer generated backgrounds they made themselves. 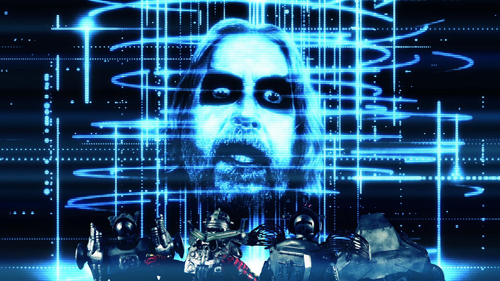 My admiration for the Robots’ hard work and ingenuity is sincere. They worked their automated asses off coming up with Crash and Burn. Unfortunately, they spent nowhere near as much time on interesting characters, an intriguing plot, and a well-written script. To be blunt, it is a real chore to get through this film in one sitting. It put Dr. Mality’s willpower to the test.

Crash and Burn labels itself as a feature film, but it’s actually broken down into separate chapters, much like the serials of old. Each chapter seems to be about 10 minutes or so in length. Watching chapter by chapter is much preferable to watching the entire hour and forty-one minute “movie,” a task that would cause your head to explode much like the unfortunate gentleman in Scanners.

The plot is He-Man simple. Max, Strobo, Auto, and Trogg are robot gladiators who battle an endless assortment of mechanized monsters for the amusement of huge robot crowds. They seem to be prisoners. They make a daring assault on their masters during a contest and are pretty much shot down and terminated like cannon fodder. But being robots, this is not a permanent condition. They are welded back together and reanimated by a galactic force of robot rebels.

The revived Killer Robots are now given a new assignment: They are to penetrate the fortress of a wicked robot overlord named Aton (I think) and input a secret code into his system that will bring universal peace to the galaxy. Having no choice, the Killers accept the mission and are transported to a primitive junkyard planet full of hostile robots, monsters, and techno-cultists.

That plot sounds a lot more interesting than it plays out. When I was a small kid, Hanna-Barbera flooded the TV screens with violent action cartoons like The Herculoids, Space Ghost and Birdman. These cartoons were 10-minute blasts of pure mayhem with microscopic plots, stock characters, and cool visuals. Crash and Burn is very much the successor to those old cartoons. Whereas a seven-year-old in the ‘60s and ‘70s would think they were the bee’s knees, it’s a lot harder for a contemporary adult to endure more than 90 minutes straight of simple-minded smash-and-bash performed in a visual style that makes the eyes ache.

The world of The Killer Robots! is full of sound and fury, signifying very little. High volume is a substitute for funny or witty writing. Characters are constantly screaming, yelling, or bellowing…things explode every thirty seconds…a monotonous synthesizer score plods ceaselessly in the background, numbing the mind. For a band that prides itself on catchy music, I would have thought The Killer Robots could have come up with a more memorable soundtrack. Only when they play an actual song at the very end of the movie do we hear what they are capable of. 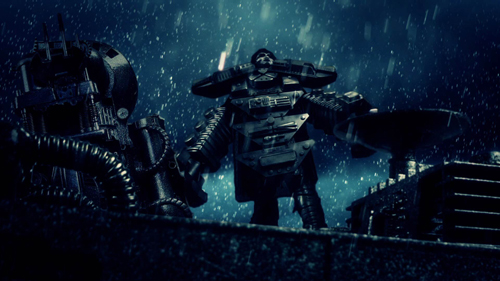 As might be expected, acting is broad and over the top. That’s to be expected. It does wear you down after a while. I found the guy playing the evil robot high priest the most entertaining, delivering his ripe lines in Shakespearean manner. The rest of them mostly speak in bad one-liners or bestial roars. The character Trog bellows at the top of his lungs and bangs his oversized fists together. There’s another character almost exactly the same, a giant ogre named Pluton.  They provide ear-splitting volume whenever they’re on screen.

There’s no doubt that a great deal of detailed work went into creating the background scenery that the characters interact with. Studying how the scenery was created from plastic junk is an interesting exercise. However, the way the characters interact with it is painful to watch. They all hop along using an awkward lope that resembles a constipated orangutan. It looks goofy and watching a film that was done almost entirely on a cut-rate “green screen” is hard on the eyes and brain.

There are some good points worth mentioning. Sometimes the humor hits the mark. I found a visit to a robot strip club pretty amusing and the captioned dialogue for Trog and Pluton screaming and growling at each other rates a good chuckle due to irony. Also, though our four mechanoids are the stars, there’s plenty of room for strong female characters. There are at least two ass-kicking fembots who take the fight right to the bad guys. And some of the robot monsters are very coolly designed, such as a robotic dragon/dinosaur and a squad of bug-eyed giants.

As much as those points help the movie and as much as the detail that went into constructing the digital world is impressive, Crash and Burn ultimately suffers fatal design flaws. It takes more than cool robots, a lot of noise, and things blowing up to make a movie palatable. I think these characters have some potential, but more thought has to go into the overall design and plot to keep this movie from literally living up to its title. 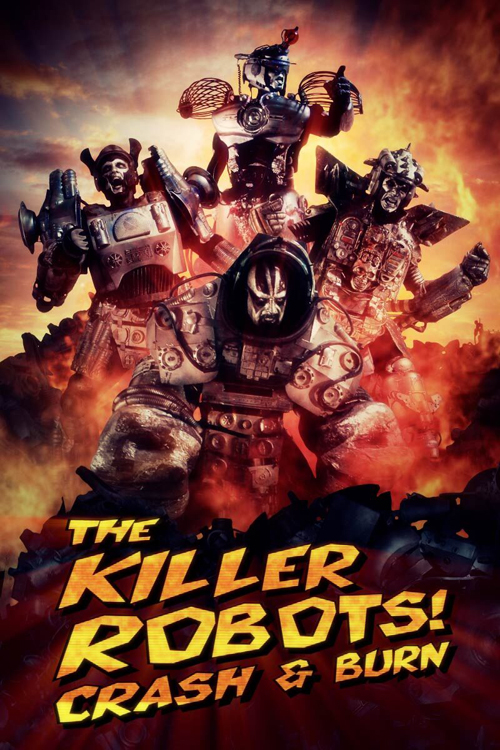