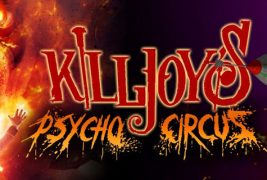 If you haven’t had a chance to check out Full Moon Features’ Killjoy series, you’re missing something. Something strangely special.

That’s very much borne out in the fifth entry, Killjoy’s Psycho Circus.

Trent Haaga plays the title character, a demonic clown who, with his motley crew of devilish rejects, escapes the clutches of hell on a fantasmic elevator that transports them to Earth and coexistence with mortal man. Killjoy and friends — Punchy the Hobo Clown (Al Burke) and Freakshow the Mime (Tai Chan Ngo) — have settled into the business of variety show TV, staging a warped talk show of sorts that features the occasional electrocution and pie-in-the-face/head-explosion antics.

Killjoy’s show also boasts a sexy vamp (Robin Sydney) masquerading as Batty Boop (Victoria De Mare). The real Batty, feeling a pinch of jealousy for Killjoy, eventually returns to the troop after a try at assimilating into the world of mortals.

It’s this show that forms the backdrop of all to come. If you’re wondering whether demons can gain acceptance on Earth, consider some of the backstage talk, much of it hilarious. Killjoy feels squeezed by his primary advertiser, by his money manager, taxes, even by the politics of the day. At one point he complains about the spotlight thrust upon illegal immigrants, shouting, “Trump made us a talking point!”

But the TV sideshow is just the beginning. You see, the devil himself, Beelzebub (Stephen F. Cardwell), has been stripped of his horns by a supreme council that holds him responsible for our crew’s escape from hell. The only way he can reclaim his satanic throne is by recapturing Killjoy’s soul. To that end, he and voluptuous assistant Jezebel (Lauren Nash) hop into a spaceship (go figure!) and head toward Earth.

What follows is a comically confusing cosmic caper that makes Killjoy’s Psycho Circus a misfit hit. You see, Killjoy has a spaceship, too, and Beelzeboob, as our pals call him, is in for a fight.

Without giving away too much, some of the best dialogue occurs outside the atmosphere. When one of the bad guys pulls a gun on Killjoy and company, we get this exchange:

“Reach for the sky!”

“We’re in space, so isn’t that a rather vague suggestion?”

Every member of the cast is in over-the-top acting glory. Haaga and De Mare, in particular, are as much fun to watch as Abbott and Costello. They chew the scenery with an efficiency not seen since Leatherface put chainsaw to skin.

John Leghago wrote and directed this entry in producer Charles Band’s series. His script is heavier on comedy than horror, but all to good effect. The makeup, the sets, the music, even the cheesy CGI elements make this a worthy VOD purchase. Heck, buy the DVD for your collection; you won’t regret it.

Killjoy’s Psycho Circus may not be highbrow entertainment, but this is one clown show you and your friends shouldn’t miss. Unless, of course, you’re a killjoy of another sort. 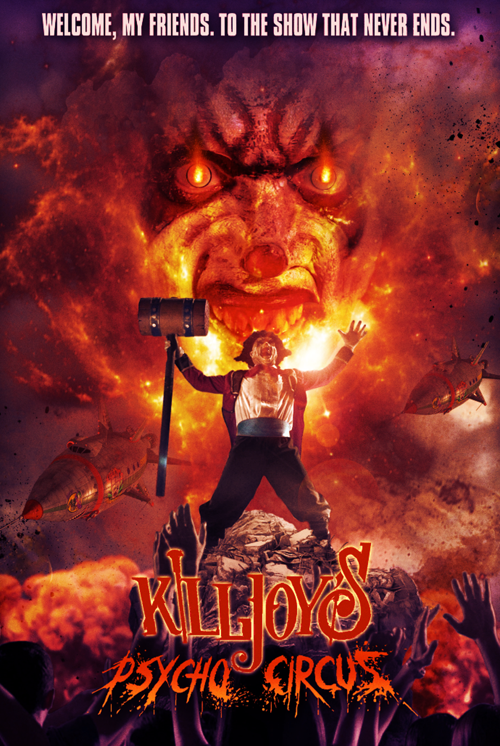