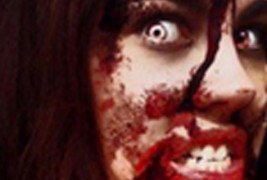 In this day and age, sisters are doing it for themselves. No, I’m not talking about boring stuff like being the face of key government positions or playing head bread maker in the 21st century household across the globe.

I’m talking about scaring the crap out of you.

Long gone are the days of women being simply tossed into horror films for the eye candy. Sure, buxom blondes are still getting hacked to pieces at a satisfying rate, but these days, more and more women are taking on the real meaty roles (no pun intended…orrrr, is there?) of not only fronting a horror film but also truly carrying it.

One such woman is Chicago’s very own Michelle Shields.  It’s always nice to find a fellow horror freak from the Windy City, and while she is trained as an actress and in theater, don’t let the smile fool ya! 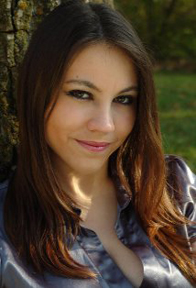 An independent actress who has dabbled in such big budget films as “Public Enemies”, “The Dark Knight” and “Fred Claus”, Michelle has really seemed to sink her fangs into the world of horror, with a handful of titles in the category of the macabre under her belt.  I was fortunate enough to discuss some of Michelle’s film endeavors and also find out what drives her, both as an actress and as a horror buff.

You’ve been warned, Hollywood… there’s an up and coming starlet on the horizon, and she doesn’t mind getting messy!

RavMon:   Having been professionally trained as an actress, what led you into the horror genre? Was there a specific film that opened your eyes to the gross goodness?

Michelle:  I have loved horror movies all my life. As a very young girl, about 4 years old, my love of the genre started with “Abbott & Costello Meet Frankenstein”. That film introduced me to a mix of horror and comedy. Maybe that’s why to this day I love horror films that include some dark humor. I must have watched that movie a few hundred times, Hahaha! My next favorite film as a child was “The Return of the Living Dead”.  I love working in horror because of the wide range of emotions it takes to portray the characters.

RavMon:   What projects have you recently wrapped or currently working on that we can expect to see you in? 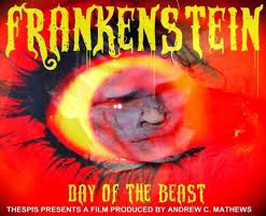 Michelle:  I am currently filming “Frankenstein: Day of the Beast”. It’s an old style Hammer House type of movie, but with lots of blood and action!  We should be wrapped by the end of April, with a 2011 Halloween premiere expected.  I also have “Sister Mary” premiering this summer as well as “Post Mortem America: 2021”.  I am also featured in several comic books, including “Deadly Threads”, “A Life behind the Mask”, “WANTED: Red Riding”, and “FANGS”, all available through Comic Book Divas (http://www.comicbookdivas.com/).

RavMon:  What has been your most memorable moment on a set?

Michelle:  I have wonderful memories from every project I have the pleasure to work on. One that is still fresh in my mind is one of the first nights we started shooting Frankenstein. It’s a great cast and we all really hit it off fast. So what’s the best way to spend your time in between scenes? Why, breaking out into song of course! Just about the whole cast started dancing and singing together and we all had a great time. This cast could have definitely pulled off doing Frankenstein the Musical as well.

RavMon:  Seeing as how remakes seem to be all the buzz statewide these days with horror films, what one classic horror film-reboot would you like to be a part of?

Michelle:  Well I have always been a fan of classic horror films from the early years in film. Being a part of a reboot of Frankenstein is really a dream come true for me. Another film that the classic Frankenstein reminds me of is “The Cabinet of Dr. Caligari”. I think that would be an awesome reboot project to be a part of because I am such a fan of that film (Justin’s personal note- I, too, have been hoping for an incredibly well done reboot of Dr. Caligari… That’s 2-0 us, Hollywood…).

RavMon:  When going into a filming session or photo shoot, how do you prepare so you are able to truly connect, especially emotionally, with your fans?

Michelle:  With film characters I try to think about how I perceive them and how I will create them in the most interesting way possible. After reading the script and my characters lines, I then create a complete back-story for them. That way I know how that character will react to a situation, what their favorite color may be, how they would dress, etc. Know every detail about the character no matter how minute to become that character.  A photo shoot is slightly different. Through body language and facial expressions and attitude you have to portray a character in a single frame! So you have to think about what you are trying to get across and take it over the top a little, but not too much. 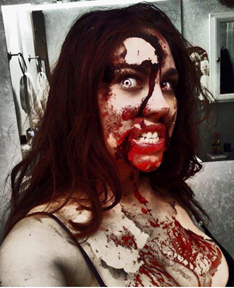 RavMon:  Which actresses do you look up to, either in the horror genre or acting in general?

Michelle:  I really love Natalie Portman’s work. I’ve been a fan since “The Professional”.

RavMon:  What is the one horror film that is guaranteed to freak you out every time you see it?

Michelle:  “The Exorcist”! A psychological horror/drama film based on a real life events. Even the music for the film, “Tubular Bells”, is very creepy! Voted the number 1 scariest film of all time! “And it gets funnier every single time I see it”, ha-ha. Sorry, threw in a “Beetlejuice” line there.

RavMon:  You are certainly paying your due diligence in the industry and it’s awesome to see a fellow Chicagoan making a name for herself. What bit of advice would you share with fellow independent actors or actresses hoping to make it in the business?

Michelle:  Never give up and get as much experience and training as you can.

RavMon:  Where can we learn more about you and follow your career?

Michelle:  The next film project I will be starring in is “Mountain Of The Flesheaters”. We will start filming June of 2011. However, the best way to keep up with me is to check out the links I have provided. Any news of premiers, appearances, new and past projects can be found there.