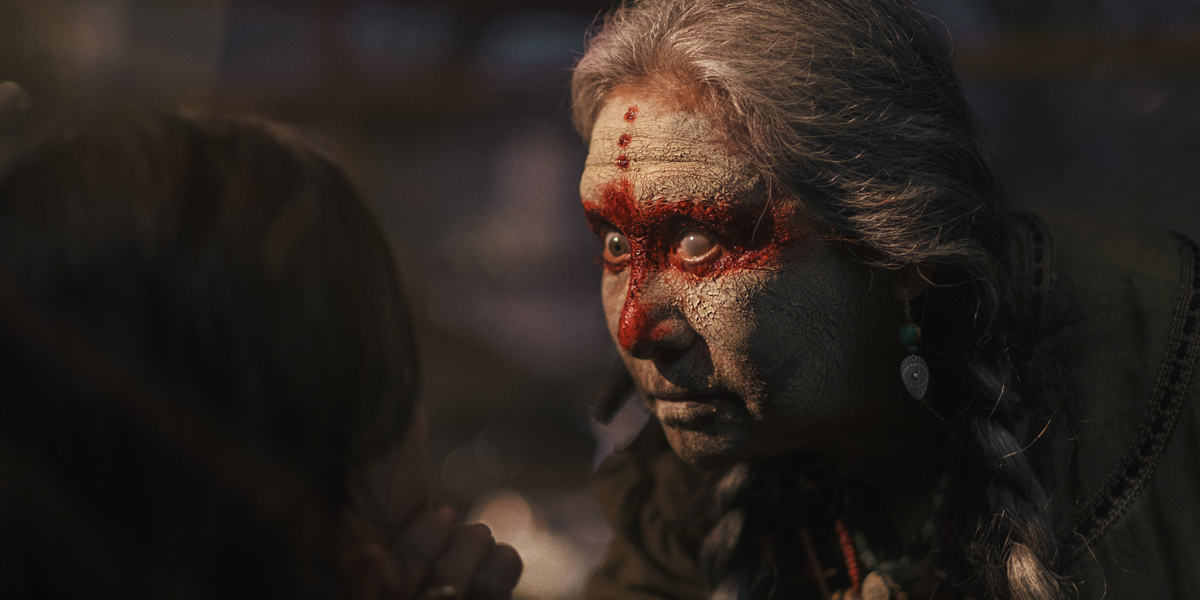 Every country and every culture has its own deep-seated traditions of magic. It can be Sub-Saharan Africa, Scandinavia, Southeast Asia or the Appalachian Mountains of the US. They also have their own “wise folk” who can use knowledge of the natural world to help…or hurt…the people in their care. The names and details change, but there’s remarkable similarity in the broader aspects of folk medicine and magic.

That holds true for Mexico as well. “The Old Ways” can yet be found deep in the countryside, but the true secrets are dwindling all the time beneath the onslaught of technology and commercialism. Fading but not yet forgotten….

The Old Ways is a new film from director Christopher Alender that looks at the darker side of traditional Mexican folk magic. For sure, this is a rich vein of generally unexplored material to delve into. In some ways, the movie is a contemporary “exorcism” film…a genre that has been rather overdone in recent times…but one that gets a fresh coat of paint due to the subject of indigenous Mexican magic.

I’m happy to say the movie is more than watchable and at its best, genuinely thought-provoking. It takes a hard look at a clash between modern and traditional cultures and frames it as a supernatural thriller. There are also some flaws and how you interpret the movie’s ambiguous ending will probably have a big effect on your conclusion. I know I’m still processing it.

It’s a low budget movie done in just a few locations with a minimal cast, yet you never have the impression you are watching a “cheap” movie. It looks like a film that can genuinely play in a theater, instead of being a direct-to-DVD or straight to streaming flick. It can’t escape a few cliches of the modern horror film, but the performances and direction are good and, like Bill Cosby said on Fat Albert, “If you’re not  careful, you might learn a thing or two.”

The movie starts with a prologue that is crucial to understanding later events. In what looks like a hut somewhere in the jungles of tropical Mexico, a woman is tied down to a bed. She is obviously the focus of some sort of traditional rite, complete with incantations and plants being brushed over her body. The woman gestures for a little girl to attend her and tells her not to be afraid. Obviously bad advice, because the woman immediately snarls and lunges, grasping the terrified little girl with claw-like hands.

We move ahead an unknown number of years and are plunged into the middle of a story. An attractive Latina woman has apparently been kidnapped by local people in the same jungle we saw earlier. This is Cristina Lopez, technically our “heroine”. That term is used loosely because Cristina is a woman with attitude and a lot of darkness inside her. She is a reporter sent to investigate the disappearing folkways of rural Mexico. Apparently, she journeyed to a cave called “La Boca” or “The Mouth”—an extremely dangerous place. At some point, she was incapacitated and is now a captive of local shamans who believe her to be possessed by a demon.

The defiant Cristina is made subject to a lot of harsh rituals meant to cleanse her of the demon, such as being force-fed a bucket goats milk by the taciturn and menacing Javi. The real chief of the operation, though, is a rather terrifying old “bruja” named Luz, complete with scary face paint and eyes clouded by cataracts. Luz is one of the last of the true “wise women” with the power to cast out evil from people.

Being a thoroughly modern woman, Cristina is convinced her captors are maniacs and she tries to resist at every turn. Surprisingly, Luz and Javi are assisted by Miranda, Cristina’s cousin, who assures Cristina the pair are trying to help her. By now, it is obvious that Cristina was the little girl seen in the prologue. While Miranda remained in the jungles of Vera Cruz, Cristina has pretty much totally rejected her heritage and embraced the modern world. To her, Miranda and her friends are the remnants of a primitive and utterly superstitious society. 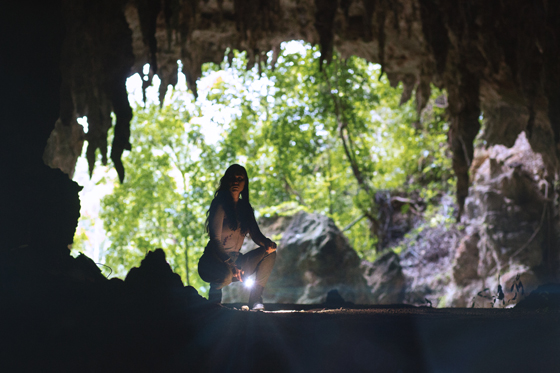 We discover that Cristina has one demon that even she can’t deny: an addiction to heroin. Although pretty much imprisoned in the jungle cabin, she’s able to get to the dope stashed in her camera bag. The revelation that Cristina is a drug addict has a definite impact on the viewer’s perception of the movie. Are the supernatural aspects of her possession real or perhaps the results of a drug-addled mind?

It certainly seems that there is magic in the air. Candles mysteriously go out whenever Cristina is nearby. A rat in the cabin seems to be squashed and torn apart by some violent force. And when Cristina attacks Javi and tries to leave the cabin, she is stopped by what seems to be an invisible forcefield. Not only that, but the grueling exorcism rites performed by Luz and Javi result in some pretty queasy body-horror scenes such as Cristina coughing up yards of black slimy hair. During one ritual, Luz roots around in Cristina’s stomach and tosses out some disgusting tumors. These scenes are not for the squeamish, for sure.

Gradually, Cristina comes to accept what Luz and Javi are trying to do. And in doing that, she embraces the “old ways” she’s spent most of her life denying. But it takes a lot of pain and horror before this happens.

Now no longer resisting the exorcism, Cristina prepares for the final rite where the Posteckhi—the demon that has haunted her life—will be cast out. It’s a life and death battle that will have a life-altering result. For good or ill? The rather ambiguous ending leaves that for the viewer to decide.

Director Christopher Alender really makes the most of the budget he’s got. The setting sure looks like the tropical jungles around Vera Cruz, Mexico, with plenty of lush foliage. There are also some spooky scenes in the cave called “La Boca” which is obviously a real cavern. Almost the entire movie takes place in the rustic cabin of Luz and Javi, giving it a claustrophobic feel. There are some brief scenes in the offices of Cristina’s employer…the antiseptic room with its computers is a stark contrast to the cabin, which could have just as well been from the 1800’s or earlier.

There are some modern jump scares which are kind of cliché, but not enough to ruin the film. Mood plays a big part in The Old Ways and is present throughout. There’s one real throwaway line during Cristina’s confrontation with the Posteckhi that kind of had me cringing. It’s hard for films to completely escape the expected tropes these days.

But really, there’s more good than bad. We learn about the characters gradually, including all of Cristina’s faults and her relationship with Miranda. At first, Luz and Javi are menacing, threatening characters, but they gradually become more humanized as real people. Alender could have gone the Rob Zombie route and had them as deranged maniacs, but he goes in the opposite direction, as Cristina eventually accepts what they are doing. But the big question is, does she go too far in the other direction? That’s up to you.

The attractive Brigitte Kali Canales dominates the movie as Cristina. She doesn’t shy away from the negative aspects of the character and while we identify with her to a point, there are times you feel like shaking some sense into her. Everybody else in the cast is up to par as well, with Julia Vera making Luz both a scary and yet heroic character at the same time. She looks like your abuela gone black metal with her makeup and cloudy eyes. Sal Lopez as Javi evolves in much the same way.

It looks like a lot of research was done regarding the folk ways of the exorcists. I looked up some “cleansing rituals” of authentic folk healers from Mexico and South America online and they were virtually identical to what we see in the film, with lots of herbal lore, smudging, painting of symbols and chanting. These really are the Old Ways that still cling to life in a digitized, mechanized world. You could go to Haiti or rural Vietnam or even Pennsylvania Dutch country in the USA and encounter the equivalent of what we see here.

Just remember, though, the Old Ways are not all light and sunshine. There is still ancient darkness in the forgotten places of the world. 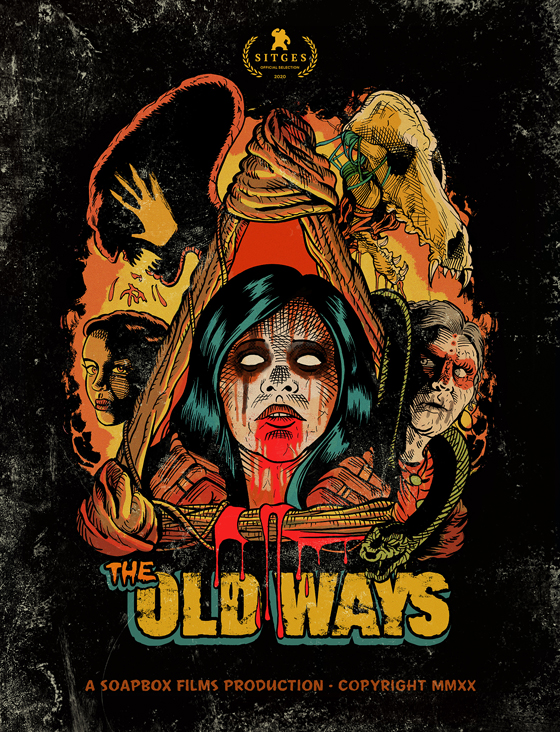