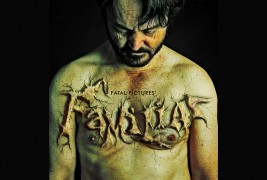 Richard Powell’s twenty-two minute short horror film Familiar draws us in using…well, familiar narrative devices (sorry) and then turns them upside down in a visceral climax that makes every one of those twenty two minutes waltz back in begging questions.

Robert Nolan plays John, a middle-aged married father whose only light at the end of his proverbial tunnel is his daughter’s impending departure to college.  We’re told via voice-over narration that this will put John one step closer to freedom, at least free from the oppressive confines of suburban monotony.

John’s hopes are dashed when his wife becomes pregnant.  She’s surprised, scared, and then eventually reinvigorated with purpose.  John toddles further toward the edge of sanity before secretly drugging his wife to end the pregnancy.  In this he’s successful, but it plunges his wife into despair.  In order to assure that his daughter leaves as planned, John ostensibly takes his wife’s struggle to heart and looks after her.

John secretly continues poisoning his wife as his grip on reality loosens.  Or does it?  The brilliant short culminates when we realize John’s inner monologue isn’t actually his disembodied voice – a narrative device we’ve all experienced in myriad film and television examples.  Rather, John’s inner demons are quite literal.  Familiar raises some really interesting questions.  Lucky for me, and you Horror Fans, I’ve interrogated the sick, brilliant minds behind this madness.  I give you Familiar writer/director Richard Powell and producer Zach Green…. 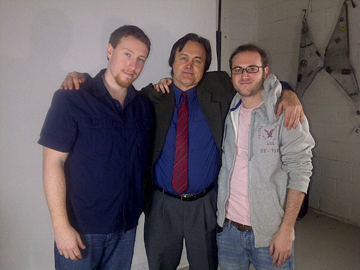 RavMon:  A large component of Familiar is body horror, a la David Cronenberg.  And there’s voiceover narration keeping us privy to what would otherwise be subtext, a la Dexter.  Were these among your influences when conceiving this movie?  What other influences helped spawn Familiar?

Richard Powell:  I wouldn’t say I was inspired by Cronenberg films, although I’m a fan of a great many of them. I can’t say Dexter was an influence either as I’ve never seen an episode of the show. I’d say my true influences are more indirect; Todd Solondz, Michael Haneke, Gaspar Noe and Roman Polansky for example are filmmakers I take thematic influence from. They tell stories about human characters and motivations that are often tragic and disturbing. They depict true human nature, not film human nature.

RavMon:  Familiar explores several types of pain: Physical, emotional, psychological, and all of them are real variations of pain.  However, not all of their causes are real.  Familiar tells dramatically different stories depending on what’s real and what’s not.  Is this something that you’d anticipated or is it a case of us viewers evolving the meaning of your work?

RP:  I’d encourage any and all interpretations of the film, they are all valid. The movie works on an allegorical level and can be taken at face value or as a broader statement. I’m happy to see the wide spectrum of interpretations.

RP:  The voice over is all parasite. John is the “protagonist” but in a very loose sense. There is this notion that the lead character has to act like a hero or with virtue, that’s not the case here.

RavMon:  To expand on the last question, is the body horror aspect of Familiar a metaphor or is it literal?

RP:  I think the film is both literal and metaphorical. John’s story may in fact be literal but the meaning of his story is very metaphorical. I like that you can take different things from the story, that it encourages thought and analysis and doesn’t simply operate on a surface level.

RavMon:  Where was Familiar shot and why were these locations chosen?

RP:  Familiar was shot in Brampton, a suburb outside of Toronto, Canada. We chose the location out of necessity as it was available to us free of charge.

RavMon:  The FX look great.  Were those scenes difficult to shoot?  Did you have the option of multiple takes or were you forced to get the culminating parasite extraction shots each in one take?

RP:  Thanks to the Butcher Shop FX Company we have those cool gore and creature scenes. In making this film I’ve come to learn how difficult FX can be. You really need to plan the FX scenes in minute detail to make them work. The FX scenes were done over two grueling nights at the end our of shoot. It was an experience. I learned a lot and look forward to working with FX again. They are great fun but a lot of work! Thanks to our great FX team we had multiple takes. 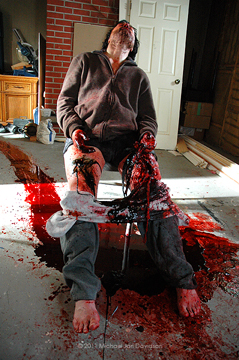 RavMon:  The film also looks and sounds incredible.  What did your budget end up being and what are some of things you’ve done to enhance your bang for the buck?

RP:  Thanks to all of our incredibly talented and generous crew we were able to get this film made for very little. A lot of skill and time was donated by a great many people and I am very thankful as without them the film wouldn’t exist. The final budget was maybe in the three-four thousand dollar range, much of that cost going to gear rentals and post production processing. The FX were another expense but we got a great deal from the Butcher Shop. The best way to maximize the effectiveness of your budget is to plan well and forge working relationships with filmmakers who you can rely on.

RavMon:  The wife, Charlotte Dodd is such a vulnerable character and a sympathetic one too.  Her story is pretty heartbreaking and it resonates emotionally more than any other element of the film.  Why did you choose to not resolve her story arc?

RP:  This film is very much about John’s journey and I feel like cutting to Charlotte would have been unnatural. The fact that the film is a short also prevents a lot of character development that would exist with a feature run time.

RavMon:  How did Fatal Pictures come to be?

RP:  I met Zach Green in film school. He became the editor of my final term film project and we have been partners ever since. In 2007 we decided to make our partnership official and formed Fatal Pictures.

RavMon:  How has Familiar performed on the festival circuit over all?

RP:  The film has only played two festivals so it’s hard to gauge what the run will be like but so far it’s been great! The fact that all of our short films including Familiar run over twenty minutes long means we are fighting an uphill battle getting it into fests. Most festivals like to program shorts that are under ten minutes and are gag/gimmick filled in nature. I fear certain festival programmers are intimidated by longer shorts and underestimate their audience’s ability to appreciate a short film with a bit of heft and complexity. That said we have been fortunate enough to be accepted into some great genre festivals including A Night of Horror, Chicago Fear Fest, Dark Bridges, Texas Frightmare Weekend and Fantaspoa 2012! We are waiting to hear from many more and our fingers are crossed!

RavMon:  Where else can people plan see Familiar, Zach?

Zach Green:  Right now the film is currently heading to the festival circuit.  Familiar won its first award at Chicago Fear Fest 2012 for Best Short.  It’s played and will be playing multiple film festivals around the world. Please visit www.fatalpictures.com for all screenings and dates. 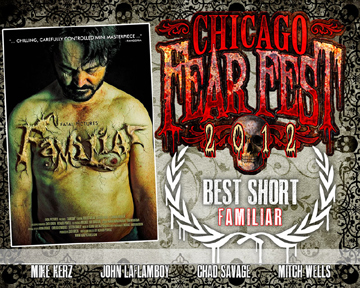 RavMon:  Have you been able to attend many screenings?

RP:  Zach and I along with much of the cast and crew were lucky enough to attend the film’s premier screening at Fangoria’s Fright Nights film series here in Toronto. We had the pleasure of screening before Battle Royale in front of a full house at the Projection Booth rep cinema. It was great and I’d like to thank Kelly Stewart and Fangoria for putting the event together!

RP:  Horror is what brought me into film and made me a fan. I love the genre for its flexibility and range. You have ghost films, slashers, suspense and mysteries, all of which can fall under the umbrella of horror. I also love dramatic film and I tend to bring elements of drama into my horror stories and vice versa.

RavMon:  What were the stories that inspired a young Richard Powell to become a storyteller?

RP:  I remember being exposed to the greats of horror at a young age and I have been hooked ever since. The first time I watched Texas Chainsaw Massacre I was transfixed. Dawn of the Dead and Bava’s Demons were among my favorites as well. These films really created that spark inside me, a spark to be creative and tell stories.

ZG:  I haven’t produced a feature film yet, but I would imagine the difference is the amount of time you’re working on the production from start to finish, the backend strategies really vary from a short to a feature, as well.

RavMon:  What do you look for when you decide which scripts you want to produce?

ZG:  I look for a script that I would want to watch and that I feel would sell and be successful and that people would embrace and enjoy.

ZG:  Richard and I are currently working on the Worm feature film script that will be the next picture from Fatal Pictures.  We’re also going to continue promoting Familiar on the film festival circuit.

RavMon: Where can people find out about Fatal Pictures?

ZG:  Online!  Please visit www.fatalpictures.com and follow us on Twitter (@FatalPictures) to learn where and when you can see our films.  I want to really thank you for taking the time to learn more about Fatal Pictures and speaking to Richard and myself.