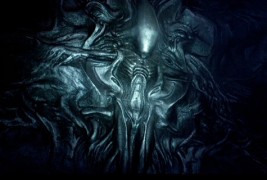 In Space No One Can Hear You Scream (Out of Frustration).

Ridley Scott’s Prometheus, is visually stunning with great special effects and CGI, a great cast and creative concepts that probe into the deeper metaphysical questions about the creation of man, but the answers to these questions, like the suspense and horror in this film, are a bit lacking.

The story begins on earth in 2089 with a team of archeologists led by Elizabeth Shaw (Noomi Rapace from The Girl with the Dragon Tattoo) and Charlie Holloway (Logan Marshall-Green—a Tom Hardy look-a-like) discovering a 35,000 year old cave drawing depicting ancient people worshiping giants from the stars. The stars in the painting are found in several other ancient civilizations of earth and turn out to be a pattern of a constellation that’s 3.27 x 10 to power 14 km (pretty fucking far) away from our planet.  Here a moon like earth resides that could possibly support the life of a superior alien race, one that might have created us and who are referred to by the archeologists as the “engineers.”

This discovery prompts the Weyland Corporation (from the Alien movies) to spend a trillion dollars at the behest of its founder, Peter Weyland (played by an unrecognizable Guy Pierce in old age make-up), to build the good ship Prometheus to ferry an exploration team across space to this unknown planet on the hunch that it could be the home world of our originators.  Representing the corporate interests of Weyland and keeping all parties on the ship in line on this expedition is the icy Mrs. Vickers played by Charlize Theron (Monster).  She spends most of her time on screen being bitchy while looking great in a tight body suit.

It takes years for the crew of Prometheus to get to the “engineer’s” planet and during the course of their long journey they’re looked after by David (Michael Fassbender), a humanoid robot who’s obsessed with Peter O’ Toole and who watches Elizabeth’s dreams while she’s in hyper sleep.  He also shoots hoops on a bicycle when he’s not plotting the destruction of the people on board.

When the crew of Prometheus reaches the alien planet, they find an underground alien installation where death lurks around every corner. However, despite how visually striking and atmospheric the movie is, things move a little slowly in a poor attempt to build suspense and paranoia with the use of dangerous planetary storms, moldy secret chambers filled with dead aliens, exploding alien skulls, a possible viral outbreak, as well as David the robot going about his own menacing, secret agenda. All of these elements tease you with promises of carnage, but those promises are more like empty gestures of impending doom because you can see most of the twists coming your way, even from 3.27 x 10 to power 14 km away.

There are a few scenes that any Horror Fan or hardcore Alien fan will love including a slithering arm-breaking/throat-fucking tentacle monster (not to be confused with face huggers from Alien – these are their more snake-like cousins) and a gruesome C-section performed on Noomi Rapace’s Elizabeth in an automated, robotic surgery pod.

Overall, the movie draws you in with its ominous tones and absorptive scenery, and writers Jon Spaihts (The Darkest Hour) and Damon Lindelof (Lost) pose a lot of deep philosophical questions throughout this quasi-Alien prequel story.  But they seem to forget to answer them once the action unfolds, leaving sci-fi horror geeks confused and wanting more from the few brief, thrilling moments that captivate.  This will have to suffice while we wait for a more action-packed sequel and/or Alien reboot (they better not! –ed.), that’s if Prometheus does okay at the box office.

If you’re rushing off to the theater today to see Ridley Scott’s Prometheus, allow me to save you some time. If you’re a fan of the Alien movies, you’ll enjoy it for the most part, but you won’t get as many viscous kills by raptors and face huggers as you may like. If you’re just sort of into sci-fi and you’re interested in checking out Prometheus from what might have piqued your interest in the trailer, you might want until it hits Red Box or Netflix.