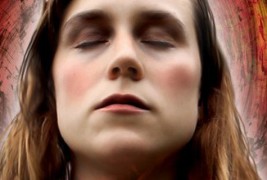 It all started like a horror movie. A set of four DVDs came in the mail without much in the way of markings. Just silver discs with titles on them. The studio, Sector 5, could’ve been real or fake. I had never heard of them, that’s for sure. Anyway, this was my assignment: pick them up, watch them, then review them. For no reason whatsoever, I decided to start with Shadow World: The Haunting of Mysti Delane.

Frankly speaking, possession movies are starting to become old hat. Just like the whole found footage fad (which needs to fade to black ASAP), the theme of possession and demonic hijinks has begotten a whole slew of middling to sub-par fright films, many of which were unnecessary sequels or prequels to films that were only okay to begin with. A perfect example: Anabelle coming brimstone hot off the heels of The Conjuring.

Given the tagline of “Witch, Warrior, Woman,” it’s easy to see that Shadow World: The Haunting of Mysti Delane is supposed to be Sector 5’s girl power flick. You see, Mysti Delane (played by Peri Jill Phillips) is an angst-ridden witch who has been abusing home-brewed Ayahuasca. If you don’t know, Ayahuasca is a Peruvian drink made from boiled vines that is frequently used in shamanistic ceremonies. Today, a lot of well-heeled Westerners and other folks chasing after the next wave in New Age fly down to South America on packaged deals that promise a week’s worth of Ayahuasca tripping. Some come back proclaiming a changed life; others just get high.

In the case of Mysti Delane, who has been abusing the stuff ever since her witch mother passed away after she overused the concoction herself, the Ayahuasca has gone past the point of either mind expansion or mere abuse. At this point, Mysti Delane has become possessed by some sort of shadow demon who exists in the world between worlds. Throughout the film, it’s never fully clear whether or not Mysti got herself possessed on purpose, because her journal entries, many of which are narrated by Mysti herself, point to someone deeply misanthropic and pissed off at human society. Mysti rails against consumerism, urbanization, deforestation, etc. You know, like every other misfit teen who has ever read about Wicca or taken a class in making tie-dye t-shirts. If Mysti is supposed to be sympathetic, then deduct one point from screenwriters Warren Croyle and Jeffrey Palmer and deduct two points from director Daniel E. Falicki.

Mysti gets a heavy dose of realism when her older sister Aurelia (played by Liz Nolan) stops by and sees that the unemployed and mopey Mysti has sold all of their grandmother’s furniture in order to pay the electricity and heat. Soon enough however, Aurelia, who is no supernatural slouch in her own right, comes to understand that Mysti is in deep doo-doo with the dark arts. The pair battles the shadow demon together in the snowbound farmhouse before taking the war to the otherworld. Aurelia gets possessed herself while trying to figure out the demon’s wishes (here’s a huge hint: it “likes” Mysti), then Mysti turns the tables by drinking some more of the magic green stuff in order to rescue Aurelia. She succeeds, then more drink gets drunk, lalalala.

There are logical problems with Shadow World: The Haunting of Mysti Delane. First of all, the film is clearly set somewhere between Illinois and Massachusetts (I put money on Pennsylvania), therefore the whole Ayahuasca angle doesn’t work. Mysti’s elixir is made up of nothing more than good, old fashioned American roots. No psychotropics need apply. Second, according to most descriptions of the film, Aurelia is Mysti’s aunt, and yet Mysti’s mumbled and hard-to-hear dialogue indicates that Aurelia is her sister. Why else would she say: “Mom” and “Grandma” like the two are in the same boat? Finally, it seems that the shadow demon is after Mysti because of some romantic obsession, and yet it is also the same monstrosity that killed Mysti’s mother. Talk about using the mother to get to the daughter.

Despite being underwhelming throughout, Shadow World: The Haunting of Mysti Delane does have its moments. For instance, the film begins with a quote from Austin Osman Spare, an English occultist, painter, and writer who helped to develop a holistic interpretation of automatic writing. In the film, Mysti does some automatic writing herself, thus completing a circle of sorts. Also, the film’s themes of family, loneliness, and emotional disquiet are neatly foreshadowed by a shot that shows Thomas Wolfe’s Look Homeward, Angel on Mysti’s bookshelf. Not bad, not bad at all.

There’s also a lot of to be said about the performances, too. Phillips and Nolan have to shoulder the acting load of the entire film (which clocks in at somewhere around 73 minutes), and all things considered, they do a great job. Phillips is believable as a troubled, depressive, and thoroughly naive young adult, while Nolan checks her energy with some well-played adult compassion. It is the script that let’s these actors down, not the other way around.

Shadow World: The Haunting of Mysti Delane has some interesting ideas, and it is always good to see small films that spotlight acting chops as opposed to special effects, especially since the special effects in this film are terrible and should have been exorcised completely. Still, this movie is so much blah. Next time, the mail better be more terrifying (Is that a demand? –ed.).

Shadow World: The Haunting of Mysti Delane was released on July 14, 2015. 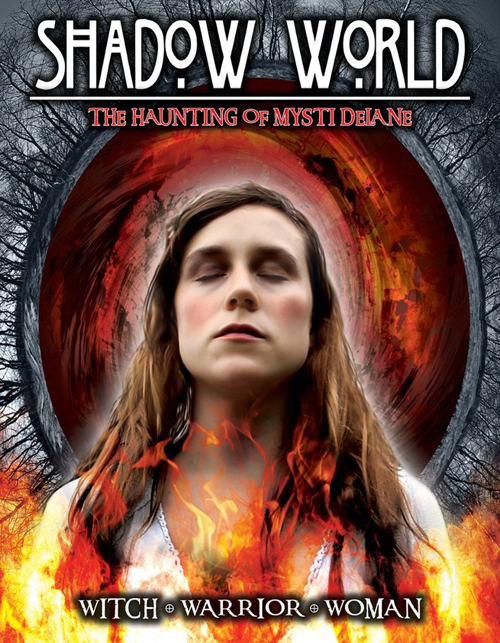