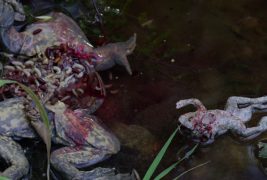 Nature. It’s beautiful and fascinating, but it’s also scary shit. I just watched writer/director Jim Ojala’s first feature Strange Nature, an eco-horror film based on real-life events. Strange Nature starts out with the discovery of a bunch of deformed frogs in and around lakes in a small town, but it turns into a lot more. Yep, I said deformed frogs and real-life in pretty much the same breath. Anyway, stick around to see if Jim Ojala’s work gave me the creepy-crawlies, or if it just made me want to crawl in a hole and hide until it was over.

Basically, Strange Nature is the story of a one-hit wonder pop star gone wrong named Kim Sweet (Lisa Sheridan). Our protagonist returns to her hometown with her son Brody (Jonah Beres), to live with her ailing, cancer-stricken dad (Bruce Bohne). The small farming town doesn’t have much going for it, but what it does have is something that it wants kept quiet, and the locals aren’t happy to have Kim back. Funny that she returns right as some of the people in town start to go missing, and someone…or something…seems to be out for blood. By the way, if I convince you to give this film a watch, make sure you pay attention to the news reports that play throughout the movie.

Getting back to the mutant frogs: There’s a lot of them that are found in and around the local lake, and no, these don’t live in the sewer and have a craving for pizza, sadly. They don’t catch and eat people like flies, even though that would be badass. They’re just frogs that happen upon a bit of bad luck…or bad something. Oh, and it’s not only frogs that are affected. Like I said earlier, this an eco-horror/bio-horror film, so you start to wonder as you watch, is there something in the air or water that’s causing the terrible things that happen? Is there something in the food? Are the farming chemicals to blame? Is Nature just pissed off at us for ruining it and finally wants revenge? I always root for Nature to win in any situation…just sayin’.

Mutant critters a-plenty naturally play a big part in Strange Nature, and they’re quite a terrifying sight to behold. Jim Ojala’s make-up and practical creature effects are very well done and the gore is plentiful and enjoyable.

There are quite a few other treats for us horror fans, such as a very short cameo by the lovely Tiffany Shepis. Bruce Bohne’s character, Chuck, is reminiscent of Grandpa from The Lost Boys, as he’s the one who knows what’s going on, but tells his loved ones only as much as he thinks they need to know. He also has some great lines. Lisa Sheridan is likable as Kim Sweet, as is Jonah Beres.  There are several other characters who add a comedic aspect to the story as well as a few surprising twists.

The story itself is a fun one, even though some of the dialogue is flat or predictable, as is the ending. However, you MUST stay tuned after the end credits roll, trust me! So, if you want to give STRANGE NATURE a chance, I believe it’s available on DVD and VOD currently.

Oh, and if you want to learn about the real-life mutant frogs, click here. 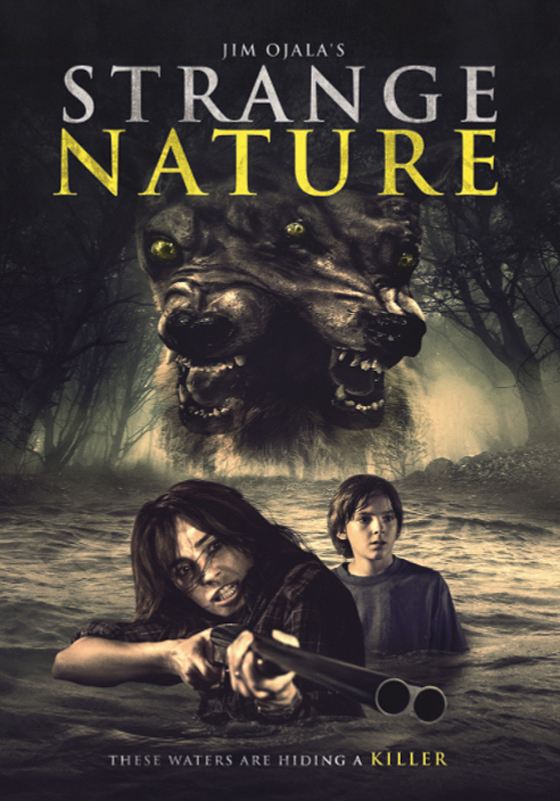