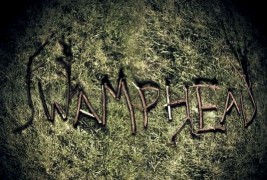 Standup comedian and horror authority Robert Hibbs brings you an exclusive interview with the duo behind the potty humor-infused horror-comedy Swamphead.  The following interview is intended for an immature audience.  Reader indiscretion is advised….

I have a philosophy that all forms of art, especially cinema, no matter what genre — be it horror, action or serious drama — is really comedy. In other words, it’s all a joke and there’s no bigger joke than Swamphead, and I mean that as a compliment.

Swamphead is a low-budget horror/comedy about a group of teens who unwittingly resurrect a severed head that turns their camping trip into “a nightmare of blood, feces and more head than a night in Tijuana” which is how it’s described in the plot synopsis on IMDB, and I can’t think of a better way to describe it myself. There are indeed a lot of shitty wigs, shitty gore, shitty pants and no shortage of shitty gags, but that’s okay with me. The film is a lot like Friday the 13th if Jason was just a head, or a zombie movie with just the head of one zombie or Head of the Family minus the family and heavy on the head with a gritty filter that gives it just a smudge of style akin to the look of a late-‘70s/early-‘80s slasher/homemade porn.

Swamphead is not a film that’s AHEAD of its time and hardcore horror geeks without a sense of humor may not be able to give it a chance, but it’s an ambitious project that was made with the blood, sweat and shit of co-writers/directors Dustin Drover and Justin Propp, filmmakers who know how to have some fun.

And I got to know just how fun they could be when we all squeezed into my hot tub for an in-depth man-on-man-on-man interview over some mimosas.

So… (Sloshes his mimosa in his champagne flute) How long have you guys been working together?

Dustin Drover: We were playing in a band together since 2001, I think. Justin was going to school for film and had school projects off and on. I think we were always talking about making films since we both had an interest.

Justin Propp: Yep. Swamphead was something we talked about from the get-go. I remember Dustin told me about it pretty early on after we met and I thought it was pretty brilliant.

(Stretches arms over Dustin and Justin) What made you want to do a horror comedy?

D: To do anything other than a comedy is a terrible endeavor. I can’t understand taking amateur film making seriously in any way. The whole thing is so ego driven that it begs to be made fun of. I do think however, there’s a special place in all our hearts for a shitty horror movie.

J: Yeah, I mean there’s no way it could have been anything but funny. We didn’t just flat out not take it at all seriously, either though. We set out to make a really good horror movie and banked on falling really short. All the movies we loved were all done this way, the difference being the other filmmakers had no idea they were making a comedy.

How did you fund Swamphead?

D: I don’t know. A little at a time so it didn’t hurt as much. Justin bought the camera and the lights so that was huge, but everything else wasn’t so bad. I bought two generators and two vehicles… Food, beer and gas might have been the biggest expense, but we never kept track. It’s not so bad when you don’t have to pay anyone.

J: Yeah, nobody got nothing. That camera was a piece of shit. It never worked. The generator Dustin bought blew up the first night of shooting. The station wagon sprayed gas and had no brakes. For the first year and a half of shooting I was working around 80 hours a week to try in vain to pay off credit cards.

Why did you pick this specific idea and what were the pros and cons of your concept to start out? (Asked between farts)

D: The idea sprung entirely from the hot tub scene. I thought it was a funny idea to have a guy sitting in his hot tub and get attacked by a “swamp head”. And he happens to have a shotgun next to him. I’d say the only con to this is how do you make a full length feature film out of that. There were a lot of ideas so Justin and I had to sort through them and try and make a cohesive story out of them.

J: The beginnings of the movie were pretty much there when Dustin told me about it. The hot tub scene, then an autopsy, and Steve and Marty and Haun. And we knew we needed something really thin to tie it all together, which was where the knife came from. I guess a con about making this particular movie would be the amount of time we spent trying to get a head on a string to fly straight and not spin in circles. On the other hand, I probably enjoyed pulling off all those shitty effects more than anything else.

How did you pick what was funny and throw out what wasn’t funny? (The soft lull of the water jets masks the sound of farts but not the stench)

D: I don’t think we did it that way. I think we threw out a lot of stuff that was really funny, but either it wasn’t working with the story line or it just wasn’t feasible. There’s a whole scene about Steve working at a struggling grocery store in the beginning that we couldn’t shoot because we didn’t have the resources. Some of it got cut because there really wasn’t much going on that had to do with Swamphead at all. The whole head attacking people thing was very secondary in the film for a long time.

J: Yeah, after we finished shooting, we had to spend an additional summer doing pick-ups because there weren’t nearly enough Swamphead shots. Most of what didn’t get shot was due to not having a location or time, like the van crashing into the tree. We couldn’t find a secluded enough place to do it and to not get caught. We had enough people that wanted to crash the van. And most of what got cut when editing just had to do with really awful continuity. A majority of the scenes were shot in pieces over the course of 5 years, so we had to cut around a lot of inconsistencies. Actors with no wig on or in the wrong shirt, or standing in the wrong place, or just disappearing then reappearing. Different times of the year. Hair growth.

Did this process lead to any arguments or debates? (Can’t stop farting!)

D: No, we’re both really bad communicators and avoid conflict as much as possible so everything went very smoothly.

What are some of your favorite moments/scenes from this film?

D: Maybe it’s because I wasn’t a part of shooting it, but I still laugh at the montage of Rick making the traps. I was very happy to see that put in.

J: I really like the deer in the car crash scene.

They say comedians are fueled by rage and bitterness and general bad things like hatred, jealousy, etc.  Did you pull from any of this? (Farts off his speedo and ignores it as it floats in front of Justin)

D: Wow, I never heard that before. Yes, almost completely. We’re both exceptionally negative people and terrible to be around for the most part.

J: We really had a lot to say and a lot to get off our chests. There’s just so much that we hate.

Since this is a horror/comedy, did you draw on any of those negative feelings to enhance the horror aspect of the movie? (Shits the hot tub)

D: I don’t think you have to be a horrible person to make a dark comedy, but I suppose it helps.

J: I pour negative emotions into everything I do.

Do you think that all horror films, both good and bad, are just dark jokes? (Can’t stop shitting!)

D: No, but the movies that are actually jokes are really great. Especially if you’re not sure it’s a joke until you try and summarize the entire movie in a few paragraphs. Then it’s brilliant.

What are your plans for this film? (The waters are churning brown froth)

D: It’s nice to think it will be floating out there for a long time, but I don’t really have plans. I think that’s other-people-that-I-don’t-know’s job.

J: The movie’s due out in March sometime through Briarwood Entertainment. Currently the only screening that’s set is in late March at the HorrorHound Weekend in Cincinnati. I have a feeling we’ll have a pretty busy summer with it once the DVD is out and we actually have something to sell for gas money.

What are you working on next?

D: Well let me tell you, I have a rough draft for a movie called Rapehand. Hand that rapes people. Who knows, maybe someday we’ll make that piece of shit.

J: I was working on this script called Black Lagoon in the Winter, which is a monster movie about ice fishing. So depending on if the lake stays frozen long enough and everything’s in sorts, I may do that. Otherwise I might just remake Lethal Weapon.

(And I overflowed the hot tub and my guts exploded out of my stomach…SCENE!)

As comical it was to take a shit soak with the D and the J, it’s nothing compared to Swamphead, a movie that may catch you by surprise both with its gore and gags.

I wouldn’t say that you should HEAD straight to local horror film fest to see it, but it wouldn’t be a bad movie to watch while getting head from your significant other, but just make sure you don’t shit yourself with laughter while she or he or he/she is doing the dirty.