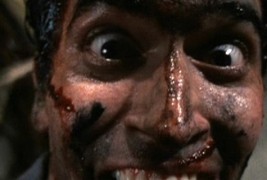 What does it take to make the list?  Simply put, these characters need to be the type that inspire laughs while remaining adept when it comes to dispensing beat downs.   Characters are ranked for being able to balance ass-kickery with wise-assery.  Funny ass-kickery is an immediate ranking boost.  And before you comment, yes, ‘kickery’ and ‘assery’ are real words.

Dr. Venkman is a scientist with a streak for confrontation with either the living or the dead.

Ass-Kickery Highlight: Standing up to Gozer the Gozerian who had been kicking around since 6000 B.C. and closing an interdimensional portal on it.

Wise Ass Sample: “Yes, it’s true.  This man has no dick.”  Venkman weighs in on the wrong question regarding a career politician who was called “dickless”.

9) Gizmo from Gremlins and Gremlins 2

Gizmo the Mogwai is a lovable little near-muppet that is continually pushed too far.  In true horror hero fashion Gizmo can utilize a random assortment of items to kill the rampaging Gremlins.

Wise Ass Highlight:  Gizmo doesn’t talk beyond cute little coos as provided by Howie Mandel, and that is funny.

Ass-Kickery Highlight:  Half way through the second movie he literally goes Rambo, red headband and all.

Weapon of choice:  Bow and flaming arrow made of a clothes pin, rubber band and a match.

An older liberal arts student, Ashley Parker is unsure where her focus should be, until she is plunged into the middle of a massive zombie outbreak and recruited to fight off the hordes of undead.  She also has a big fucking sword.

Ass-Kickery Highlight:  Ashley sprints through a horde of zombies and dispatches fresh death with a handgun and katana.

Wise Ass Sample:  “I bet you can see Russia from your house.”  This is in response to an inept military commander.

I specify because there have been a multitude of versions of this character.  As portrayed by Ryan Reynolds, he is a cured former vampire slave and current hunter, as well as a massive pain in Blade’s ass.

Ass Kickery Highlight:  Hannibal King rams a vampire-round through a vampire’s teeth and then punches him hard enough to discharge the bullet.

Wise Ass Sample:  “Hey Blade, I got a question for you: say we’re successful, say we wipe out all the vampires — what then?  Huh?  Ever ask yourself that?  I mean, somehow I don’t picture you teaching Karate at the local Y.”  Blade does not react well to humor.

Weapon of Choice:  A nifty set of pistols that take a picture with each round fired.

6) Shaun from Shaun of the Dead

While starting what would come to be known as ‘Z Day’, a massive slacker named Shaun works in the electronics department and is unwittingly one of the few survivors on his group.

Ass-Kickery Highlight:  When his favorite pub is surrounded and overwhelmed by the undead, he pulls a Winchester rifle from above the bar and holds off the inevitable, before torching the zombies.

Wise Ass Highlight:  “FUCK-A-DOODLE-DO!”  Because sometimes words fail to fully capture the multitude of surprises in a zombie invasion.

5) Marty from Cabin in the Woods

When shit is just plain weird the Stoner is gonna’ be the one who reconciles and handles it best.

Ass-Kickery Highlight:  To avoid spoilers let’s just say, Marty steps it up and lays a plethora of creatures to waste.

Wise Ass Highlight:  “Yeah, uh, I had to dismember that guy with a trowel. What have you been up to?”  Because the stoner is always the straight shooter.

4) John from John Dies at the End and This Book is Full of Spiders, Seriously Dude Don’t Touch It

John is an impromptu paranormal exterminator with a knack for turning anything into a weapon, like a Supersoaker he fills with lighter fluid.

Ass-Kickery Highlight:  John fights through a horde of winged creatures at a Las Vegas seminar with nothing but those uncomfortable annoying folding chairs.  He does this while yelling things such as, “You’ve been sentenced to the chair, motherfucker!”

Wise Ass Sample:  “Fuck all of you.  You don’t even exist.  We’re all just a figment of my cock’s imagination.”  Ouch.

Tallahassee is the resident ass-kicker of a merry band of misfits, who turns everything he finds into a zombie killing weapon.

Ass-Kickery Highlight:  Tallahassee kills a redneck zombie with a banjo while humming the theme song from Deliverance.

Wise Ass Highlight:  “Here’s the deal: I’m not easy to get along with and I’m sensing you’re a bit of a bitch.”  He lets new acquaintances know they probably won’t like him right off the bat. 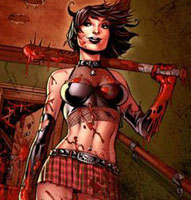 Cassie Hack is the daughter of a slasher (undead serial killer) and has taken it upon herself to hunt down other slashers with her partner Vlad, a massive mountain of man.  Together they travel the country in a shitty van hunting evil.

Ass-Kickery Highlight:  She douses an evil cultist in liquor and tells her it’s for a wet t-shirt contest, then tosses a match.

Wise Ass Sample:  While in a cartoon-styled dream state, “Either this is a bad dream or we’re being chased by a cartoon character….I’m gonna get all ‘Elmer Fudd’ on her ass.”

Weapon of Choice:  Bat with nails jammed through it that reads ‘Kiss it.’

1) Ashley J Williams from The Evil Dead, Evil Dead 2, and Army of Darkness 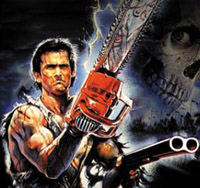 “Hail to the King Baby.”  If you’re on this site and don’t know Ash from the Evil Dead Trilogy, you have your rental homework for the night.

And there are too many instances of ass-kickery and wise-assery to isolate single examples so we’ll just site the entire canon.

Well past his prime, Mr. Haff is still able to go blow for blow with an ancient soul-sucking mummy.

Wise Ass Sample:  “But what do I care? I got a growth on my pecker.”  There is no better way to not tell, but to explain why you don’t give a shit.