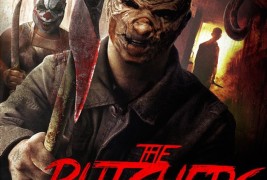 Director Steven Paul Judd’s The Butchers has a familiar premise: Strangers on a journey become mired in a strange situation. It’s a tale as old as the Canterbury Tales of Chaucer in the fourteenth century. However, instead of a storm and an inn, this tale involves a bus on its way to the Grand Canyon and a serial killer museum in the middle of nowhere. And Satanic magic. I’m fairly certain that a cigar chompin’ devil didn’t figure into any of the tales.

When the bus breaks down during a trip to the aforementioned geological destination, eleven people decide to take refuge in the nearby tourist trap while their bus driver walks back to find help. It is, perhaps, not entirely necessary to discuss the characters in their entirety, as they are all both rather underdeveloped and stereotypical. Namely, there is the rebellious, crass goth couple, a troubled former army man with his brother, two strippers, a religious couple, and a woman who is traveling with her overbearing jock brother. There is also a large, sassy black lady. Seriously.

JB, an African man somehow learns about this tiny museum and decides that this is the perfect place to fulfill a magical working. He wishes to resuscitate Jeffrey Dahmer (Woo! Wisconsin!), John Wayne Gacy, Ed Gein (Go Wisconsin!), Jack the Ripper, Albert Fish, The Zodiac Killer, and the Unknown Killer, since the Collector, owner and operator of the museum, prided himself on gathering only the most authentic memorabilia from these maniacs.

Obviously, it’s the goth couple that decides to stray from the group as they await help and fornicate shortly after reading from the eldritch tome, thereby completing the ritual. The killers rise up from the dead, full of murderous wrath and demonic power. When the group splits up (I know, always a bad idea) to find the missing couple, they begin to get picked off one by one.

As someone who has had an interest in serial killers, The Butchers appealed to me. What IF they were brought back from the dead? The truth is, sadly, that they would be much the same people, i.e., sad, troubled losers. Aside from Ted Bundy and Richard Ramirez—who don’t even appear in the movie—only Zodiac and Jack the Ripper seem like serial killers one might be truly afraid of. Suddenly, in this film, all of them are massive, hulking, powerful trained fighters with supernatural abilities.

However, this is briefly addressed in the film by a character who remained a background victim throughout. She mentions an interesting explanation for their abilities, then, it’s promptly forgotten and never expanded upon. It would have been awesome to see this point developed, as the movie could have had so many more possibilities open up. The serial killers incarnate could have been seen more as Tulpas: Idealized aggregations of the public perception of them, rather than their real loser selves. Hence, their inaccurate depictions and abilities.

Alas, no. The movie simply bulldozes ahead with more poorly coordinated fight scenes and stabbings. The Butchers becomes a Highlander-type battle to determine the final bad ass. 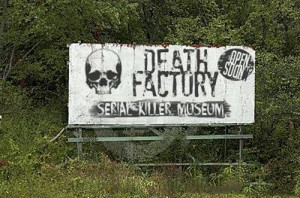 The acting is varied. The religious wife and the sassy black lady stand out as exceptionally well-acted, while the rest kind of drag along. It’s hard to tell if the killers are being played in a campy style or just with excessive exuberance. The movie kind of veers from kind of funny to serious.

Visually, the movie is quite good. Some effects look cheesy, but in the right kind of movie, it could work. As I mentioned, it is hard to tell where exactly on the funny/scary spectrum this movie wants to stay.

My biggest problem is with the pacing. The entire first half is simply the story of a guy at a museum trying to resurrect the killers and some people on a bus and their subsequent quest to find shelter and help. There is little building of atmosphere and tension. When the killers do appear, most of it seems to just be an opportunity for them to act like clichéd lunatics and fight rather than really highlight their respective infamy. The end comes suddenly, with many loose threads that seem like they were meant to create a sense of foreboding, but, instead, really just kind of feel like afterthoughts.

Another major problem is the amount of nudity. Sure, it’s a part of the slasher tradition to have plenty of female objectification. I understand the tropes. It just feels like this movie is more of an exercise in Cinemax softcore and a buff guy fighting baddies in pseudo-MMA brawls. The scenes of sex and nudity go on a lot longer than what feels comfortable for a film of this style.

While all of the killers have their shortcomings, it’s the characterization of Ed Gein as a boss-level colossus that hindered my enjoyment of the film. Firstly, his thick faux-Southern accent is completely out of character, since he’s from the backwoods of Wisconsin. Secondly, it’s generally well known that Gein was a small, strange little man who had very little presence. He was just a creepy little dude. The actor who portrays him definitely is not doing anything Geiny, save for an occasional mention of a skin-shirt or lampshade. Dahmer, in a similar vein, is portrayed as a chubby guy with the ability to detect blood-type with one simple bite. Not the Dahmer we know and (do not) love.

As a Wisconsinite, this really bothered me. Serial killers are one of our main exports, along with cheese, fatal binge drinking, cirrhosis, and the Packers.

The movie, at 120 minutes long, could being shorter to give it better pacing. That’s not to say that it isn’t an enjoyable movie. Some aspects of The Butchers do detract from it, but a fan of horror, serial killers, and camp can definitely watch this movie as snack between more complex fare. 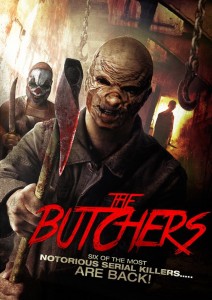