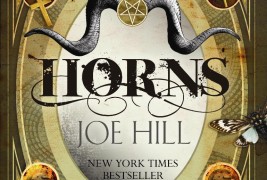 As a very big fan of Joe Hill’s sophomore novel Horns, I was awaiting Alexandre Aja’s film adaptation with much anticipation. Piranha and Haute Tension are great movies, showing a diversity of ability.  Even his weaker efforts such as Mirrors and The Hills Have Eyes remake are never dull, and his direction is always exciting and unique.

Horns follows Ignatius (Ig) Perrish after he wakes up hung over after desecrating the memorial placed where his ex-girlfriend, Merrin, was raped and murdered one year ago. He was never tried for her death, but nearly everyone in town believes Ig’s guilty of the crime.  The physical discomfort of his hangover is compounded by the horns now emerging from his forehead.  Ig soon makes a startling discovery, no one truly notices the horns, yet they now feel compelled to burden Ig with their most horrible thoughts when they see him.

As with Hill’s novel, Aja’s film centers squarely on Ig’s journey beginning with the discovery of his new horns, and soon learning the effect they have on others. The horns elicit confessions from all those he encounters.  The confessions at first are simple.  From “I’ve been unfaithful,” to “I want to have more sex and take drugs.”  Ig amuses himself with these confessions until he develops his purpose; discovering who raped and killed his girlfriend the night she broke up with him.

Condensing all the information from Joe Hill’s well regarded novel is a very difficult task. The novel is a deftly woven mystery.  Nearly every scene contains a human element that adds to the whole and never detracts from the pacing.  The residents of Hill’s Gideon, New Hampshire are alive in their condemnation of Ig, the only suspect in Merrin’s torture and murder.  The town of Gideon is best compared to that of Twin Peaks—a distinct location with an unmistakable feel.  The town is populated by unforgettable characters adding vibrancy and life.  With his new power, Ig is forced to confront truth in Gideon; not only the truth of what happened to Merrin, but the truth of how he is perceived by others.

The detailed nuances of the book are wholly lost in the film version. The town of Gideon is nowhere near as vibrant in the film as it is in the book.  The residents of Gideon are reduced to caricatures of their literary counterparts.  While this leaves Aja’s film with some of the more humorous moments intact, the genuine human touches are missing.  Many characters are completely removed from the book for pacing reasons.

Of all the missing elements, it is the backstory between Ig and Lee Tourneau that’s hurt the most. The relationship between the two is a key element of the book that the film reduces to a pair of flashback sequences.  While I understand the running time of a film is a key concern, the ending of the film, like the book, dragged.

Once Merrin’s killer is revealed and his or her motives are established the film runs for another 30 minutes while the audience awaits a physical confrontation between Ig and the killer. In a two-hour movie spending 30 minutes on the inevitable is a poor choice.  While this section of the book also drags, Hill had already established a fully realized world and has earned this, Aja’s film does not.

Despite these flaws, Horns is still a really good genre film and it’s a damned shame that it’s only playing in limited release (while Saw is re-released and Ouija also get a full national release).  Honestly, I would have enjoyed the Horns movie more had I not read the book first.  So if you’re new to this story, find a way to check this film out. 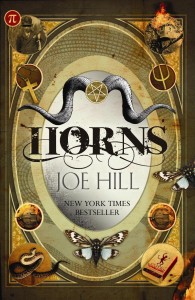 3 thoughts on “Horns: Book vs. Movie”