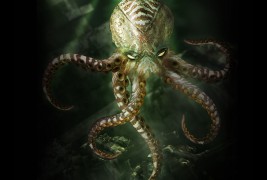 Shit. I haven’t written a Ghoulies & Ghosties & Long-Leggedy Beasties column since June, which means that I owe you, Savage Readers.  In fact, by my calculations, I owe you a good six GGLLB installments to make up for it.  And I’m a horror fan of the old tradition, which means I live by a half-secret code of ethics, rituals, and superstitions.[1]  We greet each other with a handshake intended to mimic the Gill-Man’s claw in Creature from the Black Lagoon.  If I spill beer, I ask Ambrose Bierce’s forgiveness.  If my eyes fall on any kind of paranormal romance, you better believe I’ll be saying Clive Barker’s name backwards three times to ward off the evil eye.  And most of all, I believe that all debts must be repaid by Halloween.

So in honor of our most important holiday, I’m giving you those six installments of GGLLB, evenly divided into monsters I feel need more love, and monsters I can’t stand.  Ready, Savage Readers?

Ghouls: Nowadays we just use “ghoul” as a synonym for “zombie,” which is unfortunate because ghouls—or better, ghuls (the best transliteration of the Arabic غول)—are one of our creepiest monsters.  In Middle Eastern legend, ghuls are corpse-eating, shapeshifting monsters who can always be distinguished by their hoofed feet.  Ghuls haunt deserted roads, taking the form of beautiful women to lure travelers away and devour them.  More modern depictions have jettisoned the shapeshifting, but added in something as interesting: the idea that ghouls have a culture.  Lovecraft’s ghouls are morbid but friendly, speaking a “glibbering” language and living in cemeteries.  Neil Gaiman’s ghouls in The Graveyard Book name themselves after famous people whose corpses they’ve devoured. Dungeons & Dragons gave them a god, a Ghoul King, to worship.  Ghouls are a black comedy version of humanity, ridiculous and horrifying and weirdly likeable.

Bogeymen: I like bogeymen because I had two of my very own: Rab and the Monkey Man.  Rab was a saber-toothed tiger who stood on his hindlegs and had red, glowing eyes.  He would visit me at night, bringing nightmares like a malevolent Santa.  Once, he swallowed me whole, unhinging his jaw like a snake to do so.  He sang a song about it that went, “And whenever I’m hungry, I eat him!”[2] This terrified me because it suggested that perhaps Rab devoured me every night, and I just forgot about it.  I sometimes woke up from nightmares to hear a cat yowling.  I knew it was him.

The Monkey Man awaited me if my Mom ever forgot to pick me up from kindergarten. He looked like a hairless chimpanzee, but he wore clothing and smiled a lot in an off-putting way.  Every night, he held a terrifying assembly in the auditorium, the chairs full of deformed, gray people.  If I stayed too late, I would be forced to watch.  Thank God my Mom always picked me up.

As I grew older, I stopped being afraid of Rab and the Monkey Man. I even became weirdly nostalgic about them, the way you might feel about somebody who was an undeniable asshole but still kind of fun to hang out with.  They were a necessary step towards my love for this incredible genre, I told myself.  Bullshit.  They terrified me, and I would be lying if I said that there isn’t a place in my brain that still knows they’re out there, waiting for me to stumble into a dark closet or basement.  Waiting, perhaps, until I have child of my own.

Sea Monsters: To this day, I don’t like swimming in the ocean.  There’s something about looking down at my legs hanging over the darkness that immediately makes me think of large shapes passing by and hooked tentacles blooming up from below to pull me under.  Sea monsters crystallize fear of the unknown in a way that aliens usually don’t.  I’m not afraid of sharks.  I can understand sharks.  What I can’t guess at is what might live in the 999,999/1,000,000 of the ocean floor that we haven’t explored,[3] coming up to the surface at night to hunt.  I don’t believe in ghosts or sasquatches or alien abductions, but I believe in sea monsters.

Evil Clowns: My wife and I were watching the new season of American Horror Story, and sure enough, right there in the first episode, appeared the malevolent Twisty the Clown.  Needless to say that after Pennywise and John Wayne Gacy, Twisty adds nothing new to the mix aside from a stupid name and lack of dialogue.  I’ve never been much of a coulrophobe, but the horror of clowns lies in the perversion of something intended to be amusing and innocent.  Now, anytime a clown appears, we assume it’s psychopathic until informed otherwise.  The element of surprise is gone.  And besides, they’ve been featured on American Horror Story.  If you’ve seen something on American Horror Story, it’s such a cliché that even people who know nothing about horror are familiar with it.  Send out the clowns.

Killbillies: Suppose you want to tell a story about rich white people threatened by black cannibals, but you don’t want people to think you’re a racist douchebag.  What’s a hack to do?  Fall back on hillbillies!  They’re Scots-Irish, so you don’t have to feel any more awkward than normal when hanging out with your token black friend!  And sure, it was done in Deliverance and Wrong Turn, but it’s not like people have been telling stories about savage hicks for that long.  Oh sure, you could count Sawney Bean, patriarch of a legendary clan of sixteenth-century, backwoods, Scottish cannibals, but that was different.  They weren’t ‘Murrican.

Aliens: I’m actually a sucker for a really well-designed, creepy alien—the more incomprehensible and menacing the better.  What I hate is our latter-day “mythology” of abductions, anal probes, and government hangars.  For one thing, almost every reported “extraterrestrial” is painfully mundane: Greys, reptilian humanoids, Hopkinsville goblins, Nordic “Space Brothers”. . . .Why is it that evolutionary processes totally separate from ours produces anime fetuses, lizard men, low-level D&D encounters, and Norwegians?  Why do we assume aliens would be humanoid?  Why do we think they would be able to communicate with us in any meaningful way, let alone secretly collaborate with our government or build pyramids for us?  This is low-rent, imagination-free conceptual bullshit, the Information Age equivalent of the elves, orcs, and dragons.

There we are—all debts paid. That means I won’t have to sit for six days and six nights in a crypt where only women have been buried, my feet in a bucket of pig’s blood and a sign that says, “Profligate Asshole” hanging around my neck to keep the debt-collection sparkle vampires away.  A very happy Halloween to you, Savage Readers.

[1] From here to the end of the paragraph, I’m just going to make up a bunch of weird bullshit.  Feel free to skip ahead if you’re not in the mood.

[3] This is according to Robert Ballard, the guy who discovered the Titanic.

[4] Though according to the Aztecs, the palm of the hand is the tastiest part.