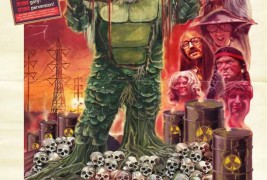 Radioactive waste, monsters, busty babes who are trying to prove that they’re “groovy,” hillbillies, and a far-out scientist dude who wants to capture Bigfoot in the flesh. Cue Keith Morris singing “Parade of the Horribles.” Better yet, put on Municipal Waste ripping through “Wolves of Chernobyl.”

To call Mutantis a tongue-in-cheek parody would be an offense to tongues and cheeks. A hodge-podge send-up that mixes the big monster science fiction flicks of the 1950s with the grindhouse films of the 1970s and the slasher soundtracks of the 1980s, Mutantis is a true Frankenstein. A word of warning to interested readers: don’t watch Mutantis in order to appease the ravenous beast inside of you. If it’s deep in the lonely October and you’re starving for a fright film to consume, then avoid these empty calories. Mutantis is neither scary nor haunting. In fact, Mutantis is the cinematic equivalent of fast food – it’s full of fun and exciting colors and it’s something you’ll probably crave every now and then, but after the first taste you’ll invariably encounter bubble guts and a strange itching in your loins.

The first directorial outing for Kelly Fitzgerald (who is listed as Grobus Walt, Jr. during the film’s opening titles), Mutantis, which was written by Seventh Day scribe Mark Leake, who also uses a pseudonym, is an anti-film. For most, entering a movie theater or slipping off the lights at home in order to watch a film is predicated upon a suspension of disbelief, specifically the idea that you yourself could be transported to the very place and time that the particular film in question is dealing with. Even in contemporary settings that look and feel like our own world, the best movies either enhance the drama of everyday life through defamiliarization, which is the act of presenting the commonplace in an unfamiliar way in order to enhance our perceptions of both realities, or they offer escape hatches on our daily pods. Mutantis doesn’t really provide either, for even though this film is nominally about a hermaphroditic monster that looks like a dime store imitation of Ymir from 20 Million Miles to Earth, it is in actuality about a movie doing its damnedest to seem like a very bad movie. Mutantis is a matryoshka doll of crapola, with oniony layers of smug silliness and more hammy kitsch than Rocky Horror Picture Show night at a drag queen bar. Not that there’s anything wrong with that, mind you.

The plot to Mutantis is rendered null and void by the film’s whacky accouterments, but nevertheless this film does have one driving force—sex. More specifically, sex humor. Bawdy, gross, and slimy sex humor.  Every character in the film, from the broke “freelance intellectual” Father Joy (who is played by two men who look little alike) to the big, green lizard crab of the title, is obsessed with the sideways tango, and as such Mutantis is overloaded with cock shots and a pair of bouncing breasts during each reel change. While too cartoonish to be graphic, Mutantis might churn a stomach or two, especially during such scenes as when the camera goes close-up on the monster’s erect killing rod, or when a certain secretion is lethally administered to the eyes and mouth of one of Mutantis’s victims.

Other than Father Joy’s brood, Mutantis also contains a pack of wild-eyed and wooly Appalachians who, for a price and a poke at either a girl or boy, will try and capture Bigfoot alive. There’s also a couple of groovy young rockers who like their sex regular and their weed a-plenty, while the “establishment” in the film is represented by a pair of corporate spies (Cesar and Mr. Hughes), a mutton-chopped action hero geologist named William Fury, and an unfortunate fruit vendor who first loses a couple of fingers, then an eye. As if all of this nonsense weren’t enough, Mutantis’s parents are an alcoholic Native American who dresses like a metalhead circa 1985 and a backwoods floozy with black teeth who’s not above servicing her own offspring.

Given all of the zaniness that leaks out of this film like a sieve, it’s rather prosaic to find out that Mutantis just wants to procreate without again having to resort to incest. Mutantis’s maternal instincts require a lot of bloodletting though, and this film doesn’t skimp on the liquids or even the gooey semi-solids. Recalling the splatterpunk specials of Herschell Gordon Lewis and fellow Marylanders Pericles Lewnes and George Scott, who are only known for their Z-grade outhouse potboiler Redneck Zombies, Mutantis is a scratch-and-sniff picture that smells like leachate, which is precisely the point.

Although irony is a dead horse that needs to be left alone, Mutantis goes beyond irony into the realm of acid-induced ADHD. This anti-film entertains itself and laughs at its own jokes. It does all the work for you. All you have to do is stomach it, and that shouldn’t be hard for those horror film fans who are just a notch above peeping toms or back alley prowlers. For the rest of us, Mutantis can be enjoyed in the same way as a friend’s homemade tribute to Walker, Texas Ranger. Mutantis is fun, chaotic, and utterly perverted. It has no redeeming value and its amorality is likely to harm unsuspecting children. It is, in short, incredible. 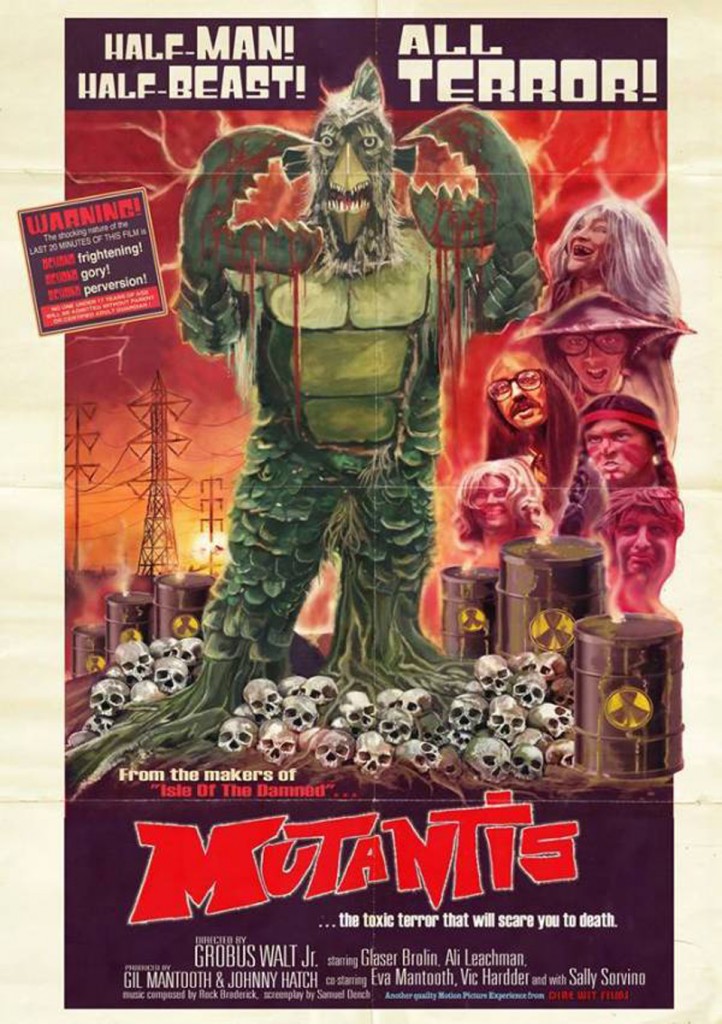