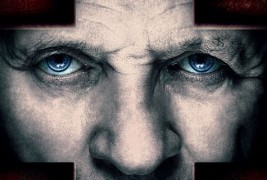 Hello everybody!  I’m your teacher Billy, and this is my workshop on “How to Make Bad Horror Films”.  Don’t be nervous.  It’s much easier than one might think.  In fact, the more brittle you are, the more you’re prone to making gargantuan mistakes, doubt yourself, and end up with a cliché film – all of these being pertinent to making cinematic junk, and bringing to life your unimaginative visions like “The Rite.”

You must have certain elements when making a crappy flick.  First, you have to be an American; we are the best at it.  We can’t be original, so we usually like to remake fantastic foreign horror movies.  We strip them to the bone and loosely tie a plot around it.  This is the classic way to construct disappointment for the movie-goer.

However, “The Rite” is pure, original American tripe.

DON’T WORRY… There are many more facets to making your movie unwatchable.  I’m not going to leave you hanging.

Do we have the classic cabin in a secluded location to make it impossible for help to find you because you have no bars on your cellie?  NO, not this time!  With “The Rite”, we are going to the heart of Christianity itself, Rome – the hub of Catholicism, murder, sex, corruption in politics, and general debauchery and nefarious-ness for the last two-thousand years.  This is compared to our paltry two-hundred years of the same shit.  We have a location that apparently only Danny Brown uses.  That’s a plus because we are Americans and we know, even if we have not been there, that Europe is mysterious and they actually have dragons, vampires, and hideous creatures like the entities I pick up at the bar when I’m drunk at closing.  So, again, that’s a plus.

“The Rite” is an exorcism piece.  Do we have all the clichés that can make this type of horror movie?  Hell yes!

AND to top it all off, a cliché of all “scary” movies – the old cat scare trick.  You know the one: When it’s quiet in the theater, the character is slowly moving in to peer inside a dirty window, then you hear a cat getting squeezed and some garbage can lid getting scattered about with the gratuitous orchestra sting to cheapen the scare.  Remember, this will be your go-to tactic on making a film terrible, which is what this workshop is all about.

Ok, I’m done with the workshop.  I know it’s not a-lot of information, but that’s for your benefit.  The less you know, the worse your movie will be, and that’s what this workshop is all about.  Happy bombing.

“The Rite” is about a young man who was a mortician but decides to become a priest.  All throughout the beginning of the film he struggles with his faith.  Then he’s noticed by a priest who thinks he’s the perfect candidate to go to Rome and learn how to be an exorcist.  He does and his teacher is Anthony Hopkins – I’m bored just telling you the plot, by the way.  Besides his Oscar-winning performance in my ALL-TIME favorite movie, “Silence of the Lambs”, Hopkins has been playing the same boring characters.  No change here.  Let me just cut to the chase: The no name young priest sucks.  The plot sucks.  The writing sucks.  “The Rite” is supposed to be based on a true story.  If so, that story is a boring one.  It’s really more of a synthesis of blatant rip-offs of other movies.

I can’t help being so juvenile, but I have not one positive thing to say.  I actually heard snoring in the theater then realized it was me, I swear.  I’m just trying to save you 40 bucks by dissuading you from seeing it with a date, or at all.  That’s my only agenda.  Also, I’m too lazy to put any more effort into this “review” after all; nobody put any effort into the film.

The best nonsense line in the film is said by Hopkins: “Rome is infested with cats.”  What the fuck?  As we know from the movies, Rome is actually infested with third year American college girls who are studying abroad for the experience, and giving blow-jobs to semi-rapey accent-spewing douches everywhere they go.

3 thoughts on “The Rite Movie Review”