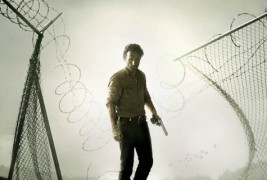 Warning:  Spoilers Ahead!  And, no, that’s not one of the handful of folksy, slangy pet names for zombies our heroes are fond of using.  The Walking Dead Season 4, Part 1 is over and the series is on hiatus until February 2014.  What begins as a profoundly dark if not fast paced season ends with a wallop—thee wallop of all wallops, really.

This season picks up at the prison where Rick (Andrew Lincoln) has relinquished leadership of the group and seems content farming and raising pigs on the prison grounds.  The group has taken in the survivors of Woodbury and relations are fairly harmonious.  That is, until a nasty strain of flu virus begins raging through the prison.  With no meds on hand and because of the severity of this particular flu, many of the people infected end up dying and then reanimating as zombies which compounds the problem to say the least.

Tyreese’s (Chad L. Coleman) girlfriend Karen and friend David both come down with the flu and upon going to visit them, Tyreese finds that they have both been murdered and their bodies burned.  Incensed, Tyreese lashes out at Rick and Daryl (Norman Reedus) and eventually spirals out of control as he fruitlessly tries to figure out who the murderer is living among them.

When Rick finds out that Carol (Melissa McBride) of all people killed Karen and David in an attempt to spare the others from catching the potentially deadly flu, Rick kicks her out of the prison without consulting anyone else.  In the meantime walkers are congregating at the prison fence which causes the fence to sag and break.  Small groups of survivors are being forced to fortify the fence while others go to nearby towns to look for medicine and other supplies that Hershel (Scott Wilson) can use to treat the sick back at the prison. 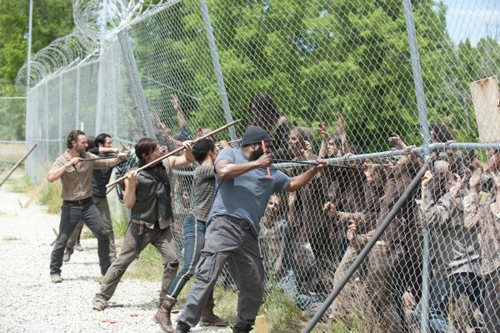 While things are quickly going south for the survivors at the prison, the narrative shifts to The Governor (David Morrissey) who’s wandering the countryside like a nomad when he enters a small town and sees a little girl who resembles his dead daughter Penny wave to him from a window.  The Governor makes up a false identity on the spot and enters the apartment building where he encounters the Chambler family—sisters Lilly (Audrey Marie Anderson) and Tara (Alanna Masterson), their sick father David, and Lilly’s daughter Meghan (Meyrick Murphy).

While The Governor, pretending to be one ‘Brian Heriot’, tells the Chamlbers about his escape from Woodbury, a community brought to its knees by its insane leader (dramatic irony to die for…literally), we see The Governor as the man he must have been before his plight made him a sociopath.  He develops a bond with young Meghan and the makings of a romance with Lilly while he assists her sick father.

Soon they leave the apartment and after some perilous traveling they come upon an encampment run by Martinez, one of The Governor’s Woodbury henchmen.  It doesn’t take long for The Governor to violently usurp power and then manipulate the camp into following him in an attack on the prison.

Armed with a tank and several military-style firearms, The Governor’s group descends on the prison, kidnaps Michonne (Danai Gurira) and Hershel, and then calls on Rick to come forward.  This sets up a stunning and gut wrenching midseason finale that won’t soon be forgotten wherein we lose several characters—good and bad, young and old, major and minor—including Hershel and The Governor, all as the prison is spectacularly destroyed and the survivors are forced to separate and scramble for their lives in a display of some of the most outstanding, emotionally moving television this reviewer’s seen since The Walking Dead’s network-mate Breaking Bad was shredding our nerves as it barreled toward the finish line.

Scott Gimple—the latest in what seems like a revolving door of show runners—has taken some risks, many of which have paid off, while also synthesizing the most successful elements of past seasons into one cohesive approach.  One of the biggest risks was the decision to largely confine the action to within the prison during the first five episodes of the eight-episode semi-season.  In this context, the novel idea to juxtapose a real viral pandemic against the zombie plague yields fascinating results.

Foremost is that the real flu is in many ways more frightening than the fictional zombie contagion.  It’s so much more insidious as it infects people nondescriptly and silently.  By the time someone knows they’ve been infected, it’s too late and they’ve likely spread it to others.  It can’t be shot in the head or kept out by a fence, and while some people overcome it and get better, others do not.  If the zombie outbreak is an incoming bomb laced with sarin nerve gas, then the flu is a carbon monoxide-saturated house while you and your family are sound asleep.  Watching characters deal with it provides some bleak and emotionally heavy drama throughout those first five episodes.

The other sources of antagonism during these episodes are mostly situations that present these characters with abstract and challenging ethical dilemmas.  There’s Carol’s insistence on training the children how to use weapons, all while keeping it a secret from Rick who’s convinced that the pre-zombie paradigm that dictates against arming our children and teaching them to kill should still apply.  Then there’s the issue of Carol killing Karen and David as a utilitarian preventative measure whereas Rick can’t abide by killing people who are “merely” ill and may recover.  Is Rick justified in banishing Carol from the prison or is Carol correct to assure the safety of many people by sacrificing two of them?  These are complex questions, the type that have been pondered and debated by philosophers and ethicists over the centuries. 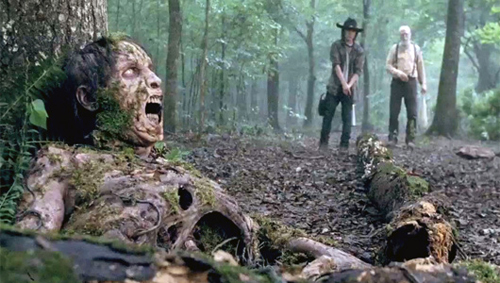 Another interesting dilemma set up by the flu pandemic is the question of what to do with the people who are sick.  The decision to quarantine them seems like a no-brainer, but when the entire group depends on specific skills of some of those who’ve been quarantined, things get really interesting really quickly.

The decision to explore issues of this nature slows the pace and shrinks the scope of these episodes and unfortunately that provides new ammunition to the small but incredibly loud group of viewers who religiously watch the show and yet still continuously flock to that cesspool of human interaction known as social media and figuratively shout their displeasure.  So, please allow me a temporary detour to address “The Whining Dead”—something that’s unfortunately become a bit of a biannual tradition of mine.

It seems members of this group are not only content with brainless, superficial horror stories, but they actively protest material that desires to transcend the genre’s too-typical base tastelessness to become sophisticated and complex works of fiction.  In doing so, they’re unwitting saboteurs of potentially great genre material because they’re louder than their counterparts are despite being drastically outnumbered.  They risk the future viability of this unusually high-minded storytelling because the suits that control the purse strings are traditionally prone to making knee-jerk changes to placate the most stridently loud complainers among us, better known as the lowest common denominator.

I’m all for well-reasoned, justified-by-evidence criticisms, obviously, and The Walking Dead is certainly ripe for some criticism but the types of things levied at The Walking Dead by these supposed fans are as silly and shallow as their tastes seem to be.  And to my dismay, George Romero has launched his own attack in a recent interview, calling the series a “soap opera with the occasional zombie,” and giving these curmudgeons an appeal-to-authority fallacy to wield.

It’s ironic coming from the guy we’d all assumed understood the idea that these stories don’t work very well if the only conflicts the protagonists face are ones that shamble around looking to bite them.  He invented the approach taken by The Walking Dead.  I’m quite fond of Romero and I’m a huge fan of many of his movies.  However, in light of his last couple Living Dead flicks, perhaps he’s no longer the go-to authority on what’s good what isn’t regarding this subgenre.  It’s safe to say that Mr. Romero has plenty of reasons to resent the show, nearly all of them being green and made of paper.

Think about what television was like twenty or twenty-five years ago.  If someone had told me then that in the future an ultra-gory hour long drama would be available to watch on TV—one that’s both a smash hit and legitimately dark and parody-free, I’d have thought that person was insane.  The Walking Dead is as objectively superior to the vast majority of zombie movies that have been released since Romero’s groundbreaking zombie opus as can be, even the seasons of the series that are considered the least successful.  Regardless of its flaws—and there are flaws—horror lovers should be dancing in the streets over the fact that The Walking Dead even exists, never mind the fact that by and large it’s very well done.

So let’s get to the flaws.  One of the problems afflicting this semi-season is that after the fourth episode, give or take, the season-long narrative arc starts to feel like its spinning in place.  The reason for that is an obvious one.  For the first time in its history, The Walking Dead is devoid of a human antagonist.  Luckily, episode 6—“Live Bait”—changes all that. 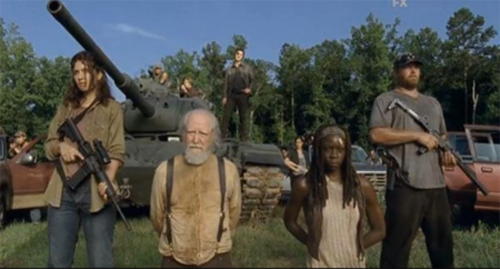 The last three episodes divert away from the prison entirely and follow The Governor instead.  The writers pull a fast one here by borrowing an age old device used by some of the best storytellers in history—morally gray characters.  Breaking Bad, Game of Thrones, and Boardwalk Empire are contemporary examples of how this can make for astonishingly good television.  Here, The Governor’s perspective of what’s happening is the one that anchors us to the narrative and as such, he’s depicted as a relatively sympathetic character.  To put it simply, we’re forced to empathize with a character that we know is a homicidal sociopath and likely insane.

At the same time, the writers put us on a collision course for the prison and a confrontation with the characters we’ve all been rooting for these past three-and-a-half seasons.  When The Walking Dead Season 4, Part 1 culminates with this showdown, we’re back to loathing The Governor, but we do so with a deeper understanding of the man which makes the explosive and tragic events of the finale resonate powerfully and painfully.

The final ten minutes of the eighth episode—“Too Far Gone”—is a marvel of intense and emotionally shattering storytelling.  The first half of this season is certainly bleak and riveting, but also a little too narrowly defined and static compared to past seasons.  However, the final three-episode arc is so potent that what would have been a solid midterm grade of ‘B-’ gets a bump up to an impressive ‘A-‘.