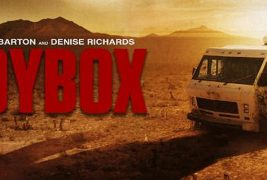 Imagine the best elements of a haunted house inhabiting a recreational vehicle. In theory, it’s like shoving spooks and kooks into quarters so cramped the claustrophobia alone will scare the bejesus out of you.

That’s exactly what the makers of The Toybox intended. New from Steel House Productions and available Sept. 18 on DVD, this demented little B-flick had the makings of something special — a decent cast (including Denise Richards and Mischa Barton), an up-and-coming director (Tom Nagel, helmsman of Clown Town) and, of course, a novel idea.

But … well, isn’t it a shame when good ideas fall victim to poor implementation?

Let’s look at the details now and save the dissection for later.

Greg Violand plays Charles, the patriarch of a family still stinging from the loss of its matriarch. In an attempt to heal the estrangement of his two sons, Steve (Jeff Denton) and Jay (Brian Nagel, brother of the director), he’s planned a family vacation in his recently purchased junker of an RV. Steve’s wife (Richards) and daughter, Olivia (Malika Michelle), are tagging along, with cuddly pooch in tow.

Bear in mind we know there’s something suspicious about this RV. In the opening scenes, we see a kid encounter the vehicle while parked on a side street. When the door mysteriously opens, the curious kid enters and seals his fate.

So, we’re sniffing trouble even before Charles and family head off on a desert road seeking adventure and fun. Then to make matters worse, Charles stops to pick up a pair of stranded motorists, Samantha (Barton) and her brother Mark (Matt Mercer). Sam immediately suspects trouble when she has a gross encounter with a bathroom sink filled with human hair.

Only moments later, the RV itself seems to wrest control of the accelerator from Charles and provides a sufficiently bumpy ride that causes the death of Mark. 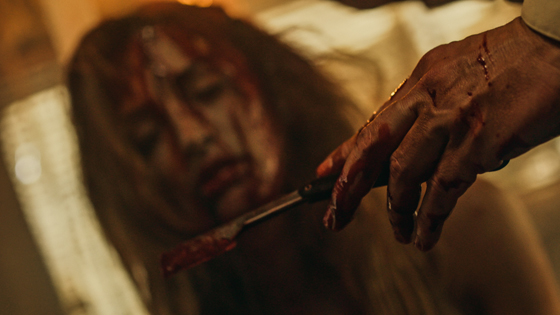 Now we’re stranded with a dead motor, in the heat of the desert, on an isolated road, with a bloodthirsty RV. What could be worse?

Need we ask? This becomes a game of 10 little indians, as one by one we watch the gang succumb to forces beyond their control. Turns out the RV had been owned by a serial killer, Robert Gunthry (played by David Greathouse), which begins to explain why various members of the family were seeing visions of a bloodsoaked woman, a bloodsoaked boy and, soon enough, their own blood.

You’d think this had the making of something special, but let’s get to the dissection.

Case in point: Logic. Daddy Charles is standing in front of the RV when it suddenly starts. Son Steve jumps into the driver’s seat, but the RV has a mind of its own and attempts to run down Charles. What does Charles do? He runs in a straight line. Stupid is as stupid does, Forrest Gump might say.

To his credit, director Nagel allows Charles to ultimately dodge the RV, only to foist upon him a more appropriate death. But when terror even briefly turns into bewilderment and comedy, something’s wrong.

And that’s the case here. Too much of what happens just defies logic. Add to that a serial killer whose real crime is a bad haircut and bad teeth, and you’ve got a picture that begins to peter out midstream.

The cast does its best to keep the audiences engaged. Richards and Barton are a cut above the rest, if a bit over the top at times. Violand, however, is a weak link, due in part to lousy lines. The screenplay, penned by co-star Denton, is about as uneven as that desert road, and the music score by Holly Amber Church doesn’t help much.

What we’re left with, despite a couple of jump jolts, is a good idea gone bad. With a better script and a little logic, The Toybox could have been The Haunting of Hill House on wheels. Instead, it plays more like a CarFax commercial advising against buying worn-out Winnebagos. 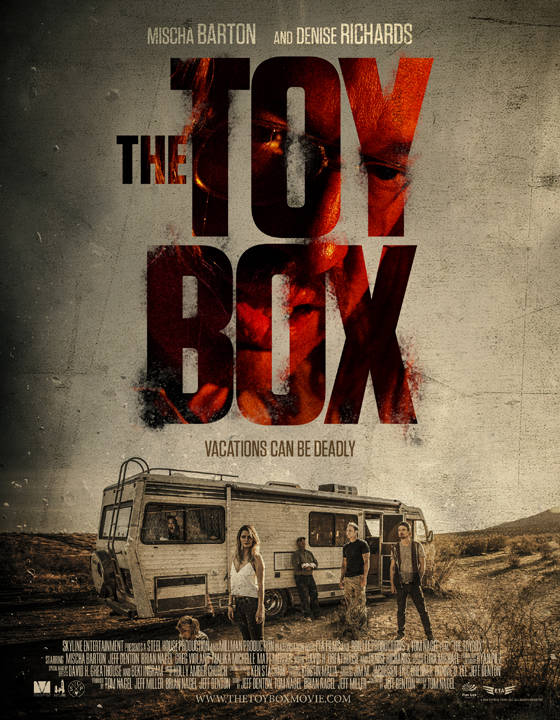