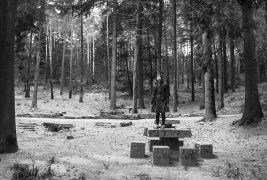 Coming to us from writer/director José Pedro Lopes is his dark and daunting The Forest of Lost Souls—a beautifully disturbing, stunningly crafted black and white tale of deceit and depression.  I went into this without any expectations, not knowing what the story was to be about. Boy, was I given a treat! If you’re looking for a surprisingly twisted film, then look no further. Grab your breadcrumbs and let me tell you a bit about this film.

The Forest of Lost Souls begins on a depressing note—a young girl (Lilia Lopes) talking about how sadness lasts forever. We see her take her own life in a lake, seemingly in the middle of nowhere.

The opening credits roll, and we meet an older man (Jorge Mota) who’s walking in the woods. He’s walking with some sort of purpose, comes to a random spot, then sits down on and takes a big knife out of his backpack. Before he can do what he intends to do with it, a charming young girl (Daniela Love) interrupts him. She makes fun of him for using a knife to kill himself and tells him that she has a vial of poison for such an event. He tells her that she reminds him of his daughter, one of the reasons why he wants to kill himself. The girl tells the man that he needs to leave a note if he plans on going through with his suicide to make it legit, and he asks to borrow a pen and paper so he can.

The two continue with their banter until she asks him if he would like to see the “forest of the dead.” As soon as they begin their adventure, they come across a body. The man is surprised to see it, but the girl seems as if she’s seen death a lot, and proceeds to swipe a pack of smokes from the deceased.

As they continue, they come upon another victim, and continue to discuss suicide. The man doesn’t understand why young people would want to commit such acts, but the girl has a pretty nonchalant outlook about death in general. As they continue to walk and talk, he asks about a lake, and conveniently, the girl leads him right to it and gives him a little history about it. He returns the favor and gives her a brief history as to why he wanted to find the lake. There’s a kind of bond these two build during their short time together, and there seems to be a small amount of trust between them. Shame it doesn’t last very long. I guess I can drop a small spoiler alert about one of them being a wolf in sheep’s clothing.

Anyway, the big twist of the film takes place right around this time, and without giving anything away, let me just say that it’s a doozy! The rest of the film picks up after the twist happens. We follow a dysfunctional family who have no idea of what’s happened to their loved one in the woods. The “wolf” from the woods is hellbent on finishing up what was left behind in the woods, and stalks the unknowing family.  We’re given a creepy cat-and-mouse game. Once the game is over, the reason for everything that’s taken place is explained. Sadness will last forever. Be careful what you ask for.

I think José Pedro Lopes knows what he’s doing, and I hope to see more from him. The cinematography is absolutely stunning, the sound effects are fantastic and the score is very fitting to the storyline. The acting is believable and relatable, and I found it very natural. This is a subtitled film, so if you don’t like to read your films, take note. The storyline is very well paced, even if there are a few plot holes, they’re minimal.

The Forest of Lost Souls is a film that you’ll either love or hate. I don’t think there’s really any middle ground. It’s a dark and disturbing tale of despair, desperation, dysfunction and death. Sorry for the alliteration there, but I like the “D.”  If you’d like to watch this film for yourself, I believe it’s due to be in theaters very soon, thanks to this being Wild Eye Releasing’s first theatrical release! 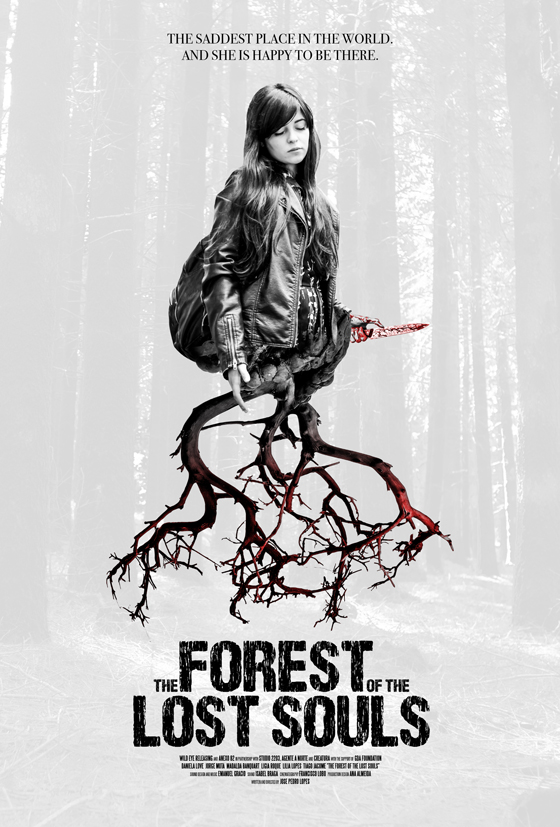