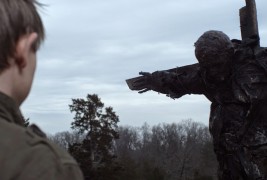 It’s the quintessential American story. Two boys set out to have some fun and fireworks in the woods. Who knows? They might get lucky. At least one of them is banking on it (he’s bringing along condoms and candles, for Peter’s sake), while the other one doesn’t need to bank because he’s pure money. Unfortunately, at the very same time as our heroes are planning their great escapade, hell has come to town. As Treehouse, which was released last year, opens, we see the devastation as Elizabeth (played by Dana Melanie) and her younger brother Little Bob (played by Jake Gregory) do battle with home invaders who, as bad luck would have it, slink off into the sunset.

Elizabeth, a tough, country-bred Missourian who knows how to hold a rifle, is not ready to go gently into the good night, so she follows the intruders deeper and deeper into the autumnal forest. Forgetting that she took off her shoes in order to quietly navigate her recently ransacked house, Elizabeth runs out into the woods barefoot and finds herself on the losing end of a broken bottle. Her feet get mangled, but bloody toes turn out to be minor worries.

Brothers Killian (played by J. Michael Trautmann) and Crawford (played Daniel Fredrick) only know about Elizabeth and Little Bob because of the local news. They’re from a few towns over, and since their parents seem to be dead, they don’t have much in terms of a guiding hand. Nobody is telling them “no” or holding them fast to a curfew. Killian and Crawford are the ones who think it’s a good idea to play footsie with some gal pals in the pines at night, even though everyone knows that people are missing (Officer Morgan [played by Darren Kennedy] cryptically says: “It’s happened again,” as if abductions and murders are a seasonal routine in this area).

At first, all goes well for Killian and Crawford. Even though the girls are unresponsive on the other end of the walkie-talkie, it doesn’t stop the brothers from sending brightly colored rockets up into the night’s sky. During one such liftoff, the overhead illumination reveals a treehouse that was built higher than most. Crawford and Killian leave to investigate because this is a horror film after all. They find a nudie mag and some rotten wood. There’s not much to see until they spy Elizabeth cowering in the corner. She’s wounded and she can’t find Little Bob. Worse, she warns the brothers that some unknown men are stalking her. 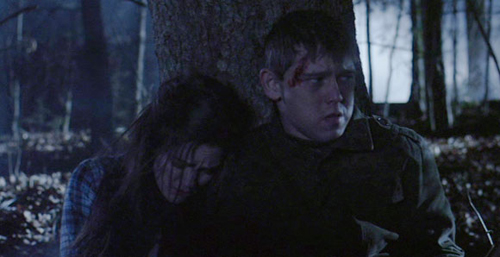 In a panic, Killian and Crawford decide to go get help. The plan is for Killian to stay with Elizabeth while Crawford returns to the dirt bike they left behind. From there the police would be summoned and all would be resolved.

Crawford’s exit sets all the bad stuff in motion, as you would expect. For the first hour and some change, Treehouse is a taut thriller that places the wounded, but gruff Elizabeth and the awkward man-boy Killian under siege. Outside of the treehouse, we can hear and feel the lurking presence of multiple attackers, and in one frightening scene, an intruder gets close enough that we can hear his halting and wheezing breathing. Miraculously, despite a clear view of Crawford’s abandoned walkie-talkie, the man (or is it a monster?) retreats back into the darkness.

Director Michael G. Bartlett and writers Alex Child, Miles Harrington, and Bartlett himself deserve some credit for understanding one of horror’s most neglected axioms: monsters that go unseen are more terrifying than those that are seen. To be seen and known is to be digested. When the black hat can be rationalized or at least memorized, then half of their power is gone. “The oldest and strongest emotion of mankind is fear, and the oldest and strongest kind of fear is fear of the unknown,” said a man who once knew. For the majority of Treehouse, the creators very wisely stick to maintaining the unknown, and coupled with Richard Wells’s well-executed original score and cinematographer J. Christopher Campbell’s excellent shots (the best of which occur inside of the treehouse, from the wide-angle shot of the treehouse’s doorway to the chiaroscuro on the wooden back wall that is created when Elizabeth and Killian light candles and strategically position action figures in order to throw their pursuers off of their scent), Treehouse is for the most part a chilling and chillingly effective horror film. 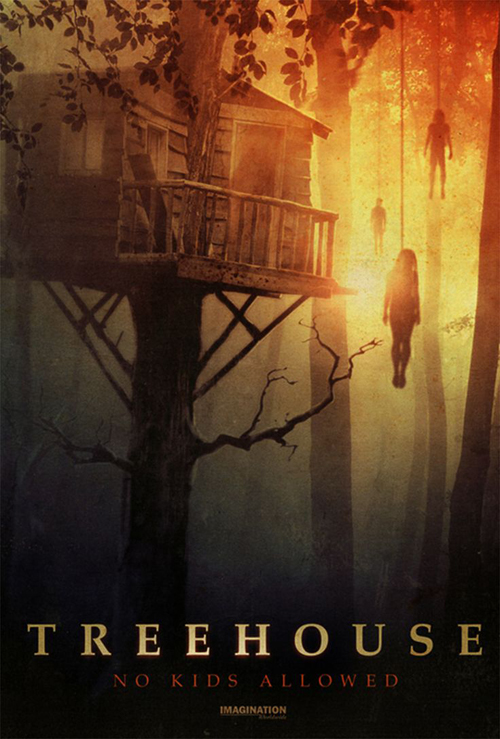 Then comes the inevitable crash. In the film’s last twenty minutes, all is uncovered. The audience recognizes just exactly who has been chasing these kids, and without revealing anything, it’s the type of typical horror movie villains one would expect to find in the rural Midwest. Somehow, the cool, muted colors that the film has been playing with all along become predictable as the film transitions from a siege-chase flick to a survival horror kill ‘em all. While Killian’s early screech for Crawford is wince-worthy (he does so while in the treehouse, which essentially lets everyone in the general vicinity know where he and Elizabeth are), it’s nothing compared to the film’s final sequence, which will undoubtedly anger many.

Treehouse’s deflation isn’t great, but it could’ve been a lot worse. After all, Elizabeth and Killian learning to love their inner “Dirty” Harry Callaghan isn’t totally out-of-keeping with the film’s arc, for the main thrust of the plot deals with Killian’s transformation from a timid, bullied, and squinty twerp into a manly action hero. Trautmann’s quirky and expressive face lends a convincing humanity to Killian, who’s clearly a kid who has been put through the wringer on multiple occasions. From his abusive father (played by Clint James, who sadly portrays the stereotypical psycho war vet) to his mean-spirited peers, Killian has a massive reservoir of sadness and frustration in the pit of his stomach, and the action in the film is tailor-made to tap into it.

Besides the regrettable villains and unsurprising father figure, Treehouse manages to be both a psychological shocker and subtle horror film. Treehouse subsists mostly on suggestion and without a doubt it’s a character-driven exploration through the lives and psychologies of two interesting, but ultimately tragic people. Even the blaze o’ glory ending (or rather the hint of a blaze o’ glory ending) can’t fully undermine the fact that Treehouse is a spiritual chamber play. And as much as the film follows some overarching horror tropes, it frustrates others even more.

Treehouse plays for a week, beginning February 20, at the Arena Cinemas in L.A. It will also be available on Digital.