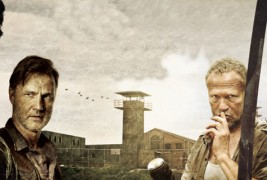 Much like its protagonists, The Walking Dead was thrust into an unstable and sometimes dangerous environment on Halloween Night 2010. Up against television heavyweights including hit shows featured on the premium cable networks as well as NFL football, The Walking Dead merely hoped to survive. Now, halfway through its third season on AMC, The Walking Dead is a bona fide hit in its own right and its success has assured it life beyond the conclusion of the current season.

So as we look at the first half of Season Three, please prepare yourself for a Zombie Apocalypse…and to be fair, a Spoiler Apocalypse….

Season Three picks up about eight months after Hershel’s farm was overrun by zombies, forcing our survivors to flee.  One of them, Andrea (Laurie Holden), got separated from the group and was left behind. The others, including Rick (Andrew Lincoln), his wife Lori (Sarah Wayne Callies) and son Carl (Chandler Riggs), as well as Glenn (Steve Yeun), Daryl (Norman Reedus), Hershel (Scott Wilson), Maggie (Lauren Cohan), Beth (Emily Kinney), Carol (Melissa McBride), and T-Dog (IronE Singleton) struggle to survive on the road until they stumble upon an overrun prison.

As they commence clearing the place of zombies, Hershel gets bitten.  This prompts Rick to amputate Hershel’s leg, preventing his death and subsequent reanimation as one of the shambling horde. To make matters worse, our heroes soon realize that the prison is also inhabited by the living which, as we’ve seen throughout the history of the zombie subgenre, always presents the biggest threat in a post-apocalyptic scenario. These survivors were inmates before the outbreak and some of them don’t take kindly to Rick and his directives. After a melee in which Rick gets the upper hand, he decides to clear out another, separate cell block for the former inmates to inhabit.

Meanwhile, Andrea is alive but extremely ill as she and Michonne (Danai Gurira) – the hooded, sword-wielding figure with leashed zombies from last season’s finale – make their way through the countryside. All we need to know about Michonne is that she’s a cynical swordswoman who’s as tough as they come. After travelling together through the winter, they stumble into residents of Woodbury, a walled-off safe haven that features idyllic small town shops housed in early-twentieth century brick buildings amid perfectly manicured lawns and quaint homes.

After arriving in Woodbury they learn that the town is run by a man who calls himself the Governor (David Morrisey) and among its many inhabitants is Merle Dixon, Daryl’s brother who was left for dead in Season One. Unbeknownst to our survivors, Merle had escaped the zombies in downtown Atlanta by severing his own hand to free himself from handcuffs. Merle is the same old cantankerous hillbilly we know and love (hate?) and now he sports a bladed prosthetic hand recalling Ash’s chainsaw-clad replacement limb from Evil Dead 2 and Army of Darkness.

It’s clear that things aren’t as they seem, though, and Michonne senses it and decides to leave. However, Andrea, it seems, is somewhat smitten with the Governor and refuses to go leaving Michonne to flee the camp alone.

Back at the prison, there’s a breach by way of a vengeful sabotage and zombies pour into the facility. As all hell breaks loose, T-Dog gets killed trying to save Carol and Lori goes into labor. Delivering her baby requires a C-section and while the birth is successful, Lori doesn’t survive the procedure. Tragically, Carl shoots his mother in the head to prevent her from reanimating. Losing Lori is the straw that breaks the camel’s back and Rick loses it, becoming – for the time being – a dangerous absentee leader which forces the rest of the group to look after Rick’s newborn while maintaining the security of the prison.  It’s worth noting that it’s in the wake of Lori’s death where this season’s strengths lie.

Back at Woodbury, our ominous suspicions are confirmed when among other nefarious deeds, the Governor orders Merle to track and kill Michonne. At the same time, Glenn and Maggie leave the prison on a scavenging expedition to find baby formula. Inevitably, Glenn, Maggie, Michonne, and Merle converge on each other and after wounding Michonne, Merle abducts Glenn and Maggie. Having overheard Glenn and Maggie talking about the prison, Michonne heads there with the baby formula while our young lovers are dragged off to Woodbury by Merle.

At Woodbury Merle beats and then tries to kill Glenn while the Governor sexually assaults Maggie all in an attempt to find out where the (prison) camp is located.  At the prison, Michonne tells our survivors about Glenn and Maggie. A rescue expedition quickly comes together including Rick, Daryl, Glenn and a former inmate named Oscar.  They hatch a plan to have Michonne guide them to Woodbury where the five of them will attempt to rescue their kidnapped compatriots (continue after the pic). 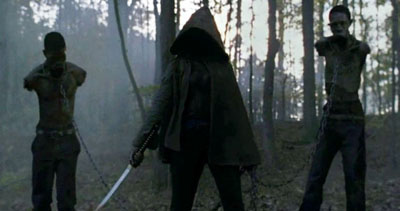 Inevitably, their assault on Woodbury ensues, exposing some more of the Governor’s twisted secrets and wounding him in the process. In saving Glenn and Maggie, Oscar gets killed and Daryl is captured. When the smoke clears, the Governor calls a town square-style meeting wherein he accuses Merle of betrayal and then reunites him with Daryl as they succumb to the mercy of the Governor’s mob.

And here is where we begin our two month holiday break, Horror Fans.

While Season Three of The Walking Dead is undeniably successful thus far, it’s a bit less consistent and a bit less fulfilling than last season was, at least to this reviewer’s eyes.

The performances are, once again, superb. Andrew Lincoln as the internally conflicted Rick Grimes is the psychological bellwether of the series, while Scott Wilson and Lauren Cohan as Hershel and Maggie Green, respectively, both stand out. Norman Reedus has become the rock star of the cast, something that wasn’t at all difficult to predict last year as his portrayal of Daryl Dixon is compelling and captivating in a classic “bad boy with a good heart” kind of way.

And of course there’s gory zombie mayhem abound courtesy of KNB FX Group. There’s also plenty of action orchestrated by very capable hands. The work of effects-whiz Greg Nicotero (the “N” of KNB) as both a producer and occasional director is particularly impressive. However, the writing this season is up and down and features much less characterization which leads to the brilliant cast doing much less acting and a lot more running around and shooting stuff. This isn’t necessarily a bad thing, but by my subjective measure it gets a little stale and unsustainable after a while.

This season’s emphasis on plot has certainly quickened the series’ overall pace as things are happening at a brisk clip, but not without some sacrifice. Last season in particular gave itself the room to build a dynamic, realistic world populated by realistic people. By showing us the frightened alcoholic lurking beneath Herschel’s stoic, calm exterior and the hopeless romantic camouflaged by Darryl’s hardened redneck veneer, we got to know these characters intimately — their secrets, their wants, their hopes and their fears. As a result, when dramatic events happened – such as the revelation that Sophia was a walker that had been hidden in the barn all along by a hopelessly optimistic Herschel, or when we see Rick’s decent into darkness and his lethal showdown with Shane – they affect us. Their impact and emotional resonance is palpable. However, this season we seem to be skipping along the surface. When T-Dog and Lori tragically die one right after another – events that should be absolutely devastating – the impact is relatively weak and, thus, the experience is less gratifying.

Characters that were given multiple dimensions and their own pursuits last season have been reduced to conventional bit players this season. And this is indicative of the larger shift The Walking Dead has made so far in its third year. The slow-burning inevitability and sophisticated characterization have been eschewed in favor of more predictable violence and zombie mayhem. And while this certainly pleases some very vocal constituents who’ve complained that the show is too tame, it’s slightly disappointing to those of us who were thrilled by the second season’s transcendence beyond the clichés of this worn out subgenre toward something deeper and more complex.

As they say, “You can’t please everybody.” Season Three’s slightly less thoughtful rendition of this world and its inhabitants still works just fine. This crew has shown it can take this material to lofty heights and I’ve no doubt that as the show continues into future seasons we’ll be treated to more of that depth and style. But for now, I’m waiting like everyone else to find out what’s going to happen to Daryl and Merle and Rick and the gang when The Walking Dead Season Three resumes in February 2013.