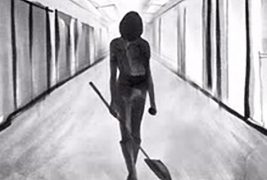 Producer Natasha Pascetta and musician James Malone (Arsis) are collaborating on a short horror movie called Road Trash.  The duo has launched an Indiegogo campaign to raise production funds and while that’s not remarkable as indie horror goes, they’ve also managed to land A Nightmare on Elm Street’s Heather Langenkamp.

The film follows the exploits of an odd young woman who’s addicted to burying roadkill.  One day she unknowingly buries a werewolf who promptly unburies itself and stalks the girl around her home town.

So, if you tally up the score here, that’s one Heather Langenkamp, a werewolf, and a fair amount of death metal.  And that, Horror Fans, is why we’re sharing this crowdfunding campaign with you.  Find the link for the Road Trash Indiegogo campaign here and watch the promo video below….