Starring Cassandra Magrath, Witches of Blackwood is a supernatural thriller directed by Kate Whitbread and written by Darren Markey. It tells the story of Claire Nash, a police officer recovering from a recent traumatic event while on the job. Having already lost her mother—who died under mysterious circumstances—Claire learns her father has died as well and returns to her hometown of Blackwood in hopes of finding answers. But things are strange back home. Blackwood seems to be nearly abandoned, with few people left. Those who remain whisper rumors of a mysterious soul-stealing entity that resides in the woods beyond.

The performances in the film are strong. Cassandra Magrath’s Claire is believable as a confident cop dealing with trauma and seeking answers to the mysteries of her past. Lee Mason’s frantic and aggressive portrayal of Sergeant Terrence Walker, the sole evidence of law enforcement in the quiet, strange, little town, is small but pivotal.

Another brief but memorable role is that of Jen Foster, played by Nikola Dubois. Her performance is low-key, but slightly manic, on the verge of snapping at any moment. Her brief scene is unnerving and provides an organic moment of exposition for Claire, and the audience, to learn more about the nature of Blackwood.

Largely, Witches of Blackwood leans toward the Mystery-Thriller side of the spectrum as Claire investigates the town, wary of the inherent weirdness she finds among the remaining inhabitants. There are moments of bloodshed and gore intermittently throughout the film, but this is not the focus of the story.

Rather, it’s about Claire unraveling the mysteries of Blackwood while confronting her past and her relationship with her mother. There’s little in the way of direct danger to Claire. While the people she finds in Blackwood are ominous, they don’t seem to pose a threat to her, except for the frenzied police sergeant. What few direct threats she encounters in her investigation are resolved quite quickly. As such, the film is a little light on tension and scares.

That said, this appears intentional. A focus on gore, scares and tension don’t seem to be the intent for the story. Rather, it is more of a character study to see how Claire reacts to the revelations she uncovers. The film’s dramatic core centers on Claire’s relationship with her mother, her past, and the choices she makes as she learns her place in the town of Blackwood.

Kate Whitbread and Darren Markey have crafted an engaging and suitably macabre film. The visual juxtaposition between the seaside town where Claire works and the woodsy, autumnal mood of Blackwood provides dynamic imagery and tonal variety, making the film interesting to watch. Some of the associative imagery when flashing back from the present day to past events are reminiscent of Nicolas Roeg’s Don’t Look Now. What it may lack in scares and tension is made up for in confident performances, strong imagery, and a calming yet foreboding musical score.

Just released to DVD and TVOD this week, Witches of Blackwood is a fine, atmospheric film, arriving just in time to kick off the Halloween season. 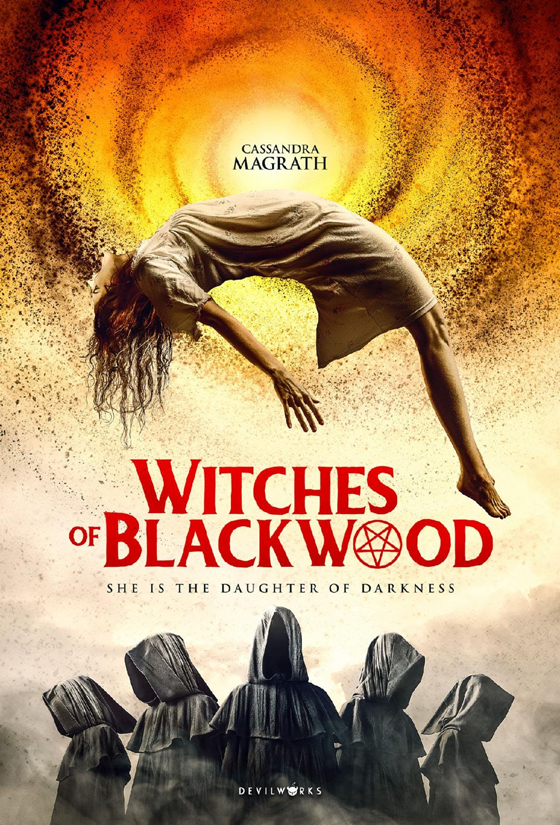