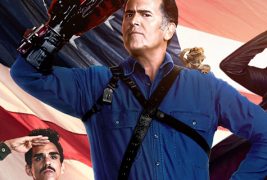 Read on for the full press release, photos and video….

Beverly Hills, Calif. – August 29, 2016 – Today, the STARZ Original Series “Ash vs Evil Dead” released the official key art and welcomes viewers to Elk Grove, Michigan with a sneak peek into the Second Season premiering October 2nd at 8:00pm ET/PT. Since Season One, Ash has been living it up in Jacksonville with his loyal sidekick Pablo and revenge-filled Kelly. Season Two kicks off with a double-deadite battle royale interrupting the party, Ash is forced to return back to his hometown of Elk Grove, Michigan…and as always, Evil follows him.

Join the conversation with: #AshvsEvilDead