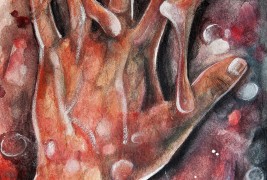 According to Powell, “Our goal is not only to create a chillingly memorable short film but to demonstrate what can be done after a film is funded. Our supporters will see the film they helped make in festivals around the world, in print and in distribution. That is our commitment, to produce one of the most successful crowd funded film projects to date.”

Some of the perks for contributing to the production of Heir on Kickstarter include:

• The full rights to an original, unproduced short film script from Fatal Pictures will be up for grabs. Make it, expand it into a feature, do whatever you like with it, it’s yours! The script, entitled VESSEL, embodies everything that makes a Fatal Pictures short film what it is; complex characters, disturbing social commentary and our signature blend of horror and drama. Matchflick.com describes VESSEL as “a unique blend of WHATEVER HAPPENED TO BABY JANE and FRANKENSTEIN”.

• The original HEIR poster painting, signed by key members of the cast and crew. This is a one of a kind reward that one special supporter will claim.

• For fans of our previous film Familiar, we will be creating limited edition dvd/blurays, which will feature an extra special, exclusive bonus feature, which will remain a secret until the discs ship. These limited editions will be the first physical release of Familiar for home use from Fatal Pictures, something that’s been a long time coming!

• Continuing with the exclusives, two major props from our previous films will be up for grabs! From WORM, Geoffrey Dodd’s suitcase of horrors (hand crafted by writer/director Richard Powell) and from FAMILIAR, the squid monster which John Dodd digs out from his leg! This unique piece of our filmmaking history was created by the spectacular FX team The Butcher Shop (the same team on HEIR) and comes covered in dried blood and all! These are just a few of our unique rewards, more to be announced shortly!

Powell and Green will join forces with accomplished collaborators including Oberst Jr., as well as Marc ROUSSEL and Ron Basch from Red Sneakers Media, to bring Heir to the horror fans.  Heir is set to be a disturbing, practical FX-driven horror short that examines one of society’s darkest taboos in a way only Fatal Pictures can.

After connecting with a stranger of similar interests online, family man Gordon and his son Paul, embark on an ill-fated road trip in which Gordon aims to indulge in a secret passion. Before the day ends a horrible truth will be uncovered and a harsh lesson will be learned.

Unlike many films seeking the support of filmmakers and film lovers across the various crowd-funding platforms, Powell and Green got some feedback and insights on the Heir screenplay to reassure potential supporters that the project is worth their investment.  Below are a few of the supportive and enthusiastic comments from a cross section of the horror community including critics, festival directors, distributors and cult horror actor Bill Oberst Jr. himself:

“Heir promises to deliver a disgusting dose of Lovecraftian body-horror that will make you squirm in more ways than one!”—Jason Thorson, editor-in-chief of RavenousMonster.com

“Considering Familiar, its last work, I would say that Fatal Pictures will definitely bring us, with Heir, a must-see short film. Graphically shocking and original with its body modifications, I would bet it’ll be a great masterpiece. The horror in its very best form: disturbing and unique.”—Nicolas Tonsho, Fantaspoa International Film Festival

“A monstrous spin on an all-too-familiar tale of bad parenting.”—Alyse Wax, FEARnet

“With Heir, Fatal Pictures have planned a stunning and memorable swansong. Set to delve into darker and more grotesque avenues than they have even ventured before, Heir is certainly going to be another sucker punch from one of the most exciting independent studios out there. Be afraid, because you most definitely won’t be prepared.”—Colin McCracken, Zombie Hamster

“Powell is an unflinching examiner of the perversion of humanity that is born of our deepest fears, doubts, regrets and hidden hurts. He reminds us we walk among the wounded and mutated every day.”—Dave Pace Bonello, Fangoria

“Powell and his producing partner Zach Green are breaking new and horrific ground with Heir. This project shows that the pair’s festival monster Familiar was no fluke; Powell and Green are in the vanguard of horror’s new cinematic masters. Heir is an honest-to-God, bona fide new notion of terror.”—Bill Oberst Jr.

“Ever since I had the pleasure of screening Familiar last year, I became an instantaneous fan of Richard Powell and his work. Richard’s ability to tell powerful stories in short film format is incredible”—Heather Wixson, Founder of CineMayhem Film Festival

Familiar can be seen on FEARnet and at the link.