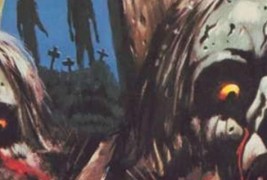 There’s a reason why the so-called Gates of Hell trilogy is unofficial. By remaining provisional, the three films made by Italian film director Lucio Fulci between 1980 and 1981 bypass the thorny issues of cohesiveness and a logical, overarching narrative. Although, they’re all vaguely Lovecraftian in some way, the Gates of Hell films are all really unified by their disorder and disunity. Frankly, none of these films make sense and most seem like excuses to let the red stuff fly with reckless abandon. Fulci and his co-conspirators just wanted to make gross-out films in the Italian style for a while, and only later did horror hounds and fright film aficionados label these exercises in gore a trilogy.

To be fair, although all of these films are adorned with more abstract and nonsensical portraits than a Dadaist exhibition, what they do excel at (blood and guts) is done so well that one almost forgets about all the dreck. As the first entry in the “trilogy,” City of the Living Dead (which has also been released as Gates of Hell and initially sported the Italian title of Paura nella città dei morti viventi) sets the unfortunate tone for the next two films, and normally speaking, The Beyond and House by the Cemetery should have only succeeded in taking the inchoate franchise to greater heights. But since we’re talking about Fulci, the low road is always taken and the pulp will always remain thick in the juice. Unlike any other film series, the Gates of Hell trilogy contains neither better nor worse movies, just survivors that somehow made it out into the open for much of the world’s critical condemnation.

In the case of City of the Living Dead, the term “video nasty” has never been so appropriate. A colloquial term for those violent and supposedly sadistic films which were prosecuted by Great Britain’s National Viewers’ and Listeners’ Association (NVALA) in the early 1980s, the video nasties were almost exclusively horror films. Lucio Fulci, the Roman director and screenwriter whose greatest claim to international fame is 1979’s Zombi 2, which remains a shameless attempt at cashing in on the popularity of George Romero’s Dawn of the Dead, could belong to the NVALA Hall of Infamy based on his Gates of Hell films alone. Like its later brood, City of the Living Dead is crude, wet with on-screen gore and gristle, and lacks any sense of uplift or rectitude. The film is pornographic in its violence, and insofar as the usual niceties of storytelling go, it deserves every jeer that it received during its 1983 premiere in the United States. In sum, City of the Living Dead is more fun than throwing ‘70s-era lawn darts at small rodents.

The film opens appropriately with a graveyard scene. As the credits role and as Fabio Frizzi’s brilliant score plays, we, the viewers, watch as a hollow-eyed and abnormally pale priest (played by Fabrizio Jovine) walks through the burial plots on what turns out to be his last legs. Although his hands look clasped in holy supplication, Father William Thomas is only privately praying for death. In the midst of the windswept graveyard, the sullen clergyman hangs himself. Since an earlier subtitle has informed us that Father Thomas and the graveyard are located in Dunwich (the legend-haunted and supernaturally active western Massachusetts village created by H.P. Lovecraft in 1929’s “The Dunwich Horror”), we know that the proverbial shit is about to hit the similarly time-honored fan.

At the same time as Father Thomas’s suicide, a New York medium named Mary Woodhouse (played by Catriona, or Katriona MacColl) is holding a séance that astrally links her with the strange events occurring in Dunwich. Somehow, Father Thomas’s suicide manages to unleash Dunwich’s dead from their long and not-so long slumbers. And as the dead rise up, Mary falls deeper and deeper into the throws of madness. She begins frothing at the mouth and seeing visions of a “city of the dead.” At one point a rather wordy epitaph is highlighted:

The Soul That Pines For Eternity Shall Outspan Death You Dweller Of the Twilight Void Come Dunwich. 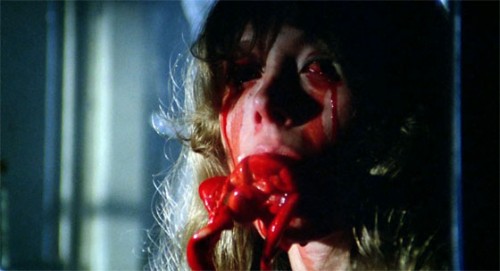 What it all means is unknown at this point, but it can’t mean anything good, especially since it “kills” Mary. Obviously, death due to excessive fear is rare, and since the death occurred in an apartment run by Theresa (played by Adelaide Aste), a shady mystic who employs former crooks, Mary’s demise looks highly suspicious to the NYPD. Sergeant Clay (played by Martin Sorrentino) thinks the séance gang were on drugs during the day’s ordeal, but Theresa assures him that everything transpired because of the Book of Enoch. In City of the Dead, the Book of Enoch is less like the non-canonical piece of scripture that is most closely associated with Ethiopian Christianity (although that particular Book of Enoch is highly mystical and delves deeply into demonic entities and the existence of angels and their offspring on Earth) and more like Lovecraft’s Necronomicon with an added wrinkle of Minority Report-style pre-crime precognition. As if recognizing the confusing nature of this narrative already, Fulci adds in a random combustion – a flash of flame that appears out of nowhere in Theresa’s salon before dissipating. The fire serves no discernible purpose. In this sense, it foretells the film’s own future.

Next, a series of unfortunate head-scratchers occur. Back in Dunwich, a punk rock outcast named Bob (played by Giovanni Lombardo Radice) finds himself in a dirty, abandoned house that comes stock with a blow-up doll that magically inflates once it’s dropped on the floor. Turned on, Bob begins to stroke the plastic flesh before being abruptly turned off by the rotting, worm-filled body of a dead infant. This here is pointlessly disgusting scene number one. Try and keep count, Ravenous Monster readers.

Back in New York, the gruff-voiced journalist Peter Bell (played by Christopher George) tries to gain access to the crime scene in Theresa’s apartment before being turned away by an even gruffer police officer (played by Robert E. Warner). Undeterred, Bell follows his story to a large graveyard overlooking Gotham (the real Calvary Cemetery in Manhattan) where the body of Mary Woodhouse is being prepped for its final rest. The two gravediggers (played by the aptly named Michael Gaunt and Perry Pirkanen) couldn’t care less about the assignment. They’d rather work their union hours, read their skin mags, and go home rather than care for Mary’s plot or deal with Peter, the pressboy pest.

Luckily for the still-alive Mary, Peter is not a union man, and therefore he is still in the cemetery after 5 o’clock when Mary regains consciousness. In the film’s best sequence, Peter frees Mary from her coffin by smashing a pickaxe thrice on the lid. Fulci masterfully sets the suspense by first using the camera to highlight the dark interior of the coffin, then cuts back and forth between Mary’s predicament and Peter’s slow realization that he is indeed hearing screams emanating from beneath the soil. When the axe blows come, Fulci shuffles his viewers to their collective seat edges by placing each strike close to one of Mary’s vital organs. In a film notorious for its bloodletting, it says something that its most powerful sequence involves no scarlet paint whatsoever. 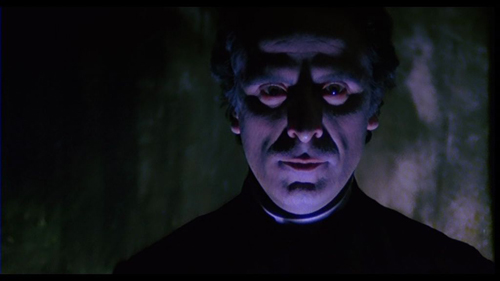 Before and after Mary’s release from her very Poe-esque burial, we learn that Dunwich was built upon the cursed village of Salem, and as such the actions of Father Thomas have opened the doors for all hell to break loose. Hence, Gates of Hell.

For the next hour and ten minutes, this hell does its damnedest to ruin your stomach. Each scene outdoes the other in terms of shocking visuals, from death via a handful of worms to a storm of maggots. The specter of Father Thomas, which appears and disappears seemingly at will, is the cause of all of this, and just his gaze alone can cause tears of blood and a type of paralysis that allows his hands to squeeze the brains from out of skulls. In one particularly gruesome scene, a pair of young lovers (played by Michele Soavi and Daniela Doria) falls prey to Father Thomas and the results are revolting. Namely, Rose vomits the entire contents of her digestive system in a painfully drawn-out sequence that shows intestines, liver, and other viscera fumbling out of Rose’s mouth to the sweet sounds of regurgitation.

Not one to rest on his laurels, Fulci includes another likeminded scene in the film when Bob is accused of trying to sleep with Mr. Ross’s daughter. Mr. Ross (played by Venantino Venantini) flies into an uncontrollable rage and kills Bob by impaling his head with a drilling lathe. In impeccable Fulci fashion, this scene is slow and torturous.

Since even the most rudimentary plot most be followed, Mary and Peter travel to Dunwich in order to stop the dead from seeping further into the world. Their goal must be met before All Saints Day for reasons that go unexplained. Just blame the Book of Enoch, I guess. While in Dunwich, Mary and Peter link up with the psychiatrist Gerry (played by Carlo De Mejo), who has just as much guts as brains, and it’s his bright idea to stab the living dead in their bellies with whatever happens to be available. Somehow this works, and by the film’s final minutes, even Father Thomas falls prey to Gerry’s spearpoint. In the end, Gerry and Mary (don’t laugh too loudly, now) manage to survive and emerge from the Thomas family crypt into the loving arms of John-John (played by Luca Venantini, who is billed as Luca Paisner in the film’s credits), the younger brother of one of Dunwich’s first victims. For whatever reason, the film freezes on a blurry close-up of John-John’s face as Mary lets out one last hellish scream.

City of the Living Dead begins as it ends. Father Thomas’s suicide is a weird way to start the apocalypse, and Mary’s final screech does not exactly sync up with images on the screen. More importantly, although the film leads us to believe that Father Thomas must be stopped before All Saints Day, he is dispatched well after midnight on All Saints Day and yet things seem to return to normal in Dunwich. It’s possible that Fulci wants us to believe that dead have not all gone into that good night for eternity, but it’s just as likely that style trumps substance, and therefore this film just ends how it does because that’s how horror films are supposed to end.

While City of the Living Dead leaves much to be desired, no one can discount Frizzi’s score or its ability to lend a satisfying air of creepiness to an otherwise outrageous film. Frizzi is an undisputed master of cinema scoring, and his ominous Mellotron and array of synthesizers (Yamaha CS80, Prophet 5, and Jupiter 8) pretty much outshine the entirety of Fulci’s oeuvre. Without Frizzi, Fulci is pale, anemic, and barely interesting. It’s Frizzi who saves City of the Living Dead, and Fulci wisely went to him again for The Beyond, which will be the focus of The Gates of Hell, Part II. 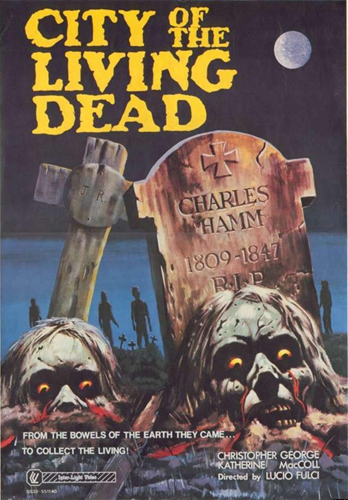 One thought on “Gates of Hell Part I: Fulci’s City of the Living Dead”