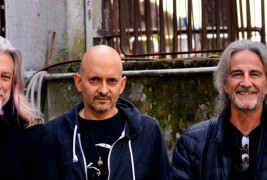 It’s pretty much impossible to imagine Italian horror cinema without also thinking of Goblin.  Their eerie cinematic soundscapes provided the soundtrack to sudden bloody death and the arrival of demonic evil. I would argue that their soundtrack to Suspiria is not only the best modern horror score but also the LOUDEST. If you remove the Goblin soundtrack from any movie they worked on, that movie’s effectiveness is essentially cut in half…at least!

Goblin in its original form no longer really exists. Claudio Simonetti, the man many consider the mastermind of the band, has struck out on his own. Now we also have Goblin Rebirth, essentially a continuation of the original band, featuring original Goblin bassist Fabio Pignatelli and original drummer Agostino Marangolo. There’s a swampy stew of bands claiming the Goblin name these days, but Goblin Rebirth has the advantage of a major independent label, Relapse Records, championing their cause.

A few things are immediately evident upon hearing the self-titled debut. One, the necessary eeriness of Goblin is still there. Two, this is a much more driving and rock-oriented version of the band. Whereas a lot of the classic Goblin soundtracks tended to be ambient and very “cinematic” in feel, the songs here are punchier and feature more driving rhythm. That makes perfect sense considering that it’s the original rhythm section that’s the bedrock of Goblin Rebirth. The guitar plays a more prominent role as well. It’s also noticeable that these are all pretty concise songs…not just cinematic movements.

The absolute Goblin purist may very well quibble with the Goblin Rebirth material, but I think most of their old fans will be along for this ride. It’s not like these guys suddenly decided to do hard techno and hip-hop. The nods to Tangerine Dream, Pink Floyd, King Crimson and earlier soundtrack masters like Bernard Herrman and Miklos Rosza are still there, and the music still has the ability to create stories in your head. Those are by far the most important aspects of Goblin.

Now I want to take a more in-depth look at each track….

“Requiem for X” starts with the sounds of a clockwork toy and then some very eerie whistling. You feel like you are in an abandoned, cobwebby playroom for a long dead child. Piano, synth and a huge church organ combine to create a song of many layers. The song becomes more hard-edged and “dangerous” sounding until a clear electric guitar solo comes in. This song already has a more powerful and driving sound to it yet it retains the haunted house feel of earlier Goblin. This is really very dark sounding progressive rock, returning finally to the original theme. A very impressive (and concise) opening track.

“Back in 74” might be my favorite song here. It’s got a snappy “future retro” synth riff and powerful drum beats pushing it along. On this foundation, there’s a great combination of guitar and synth work. This again emphasizes the harder, more rock side of Goblin Rebirth and would make a great soundtrack to a film noir action scene. Wonderful keyboard work shines throughout.

“Book of Skulls” shows another side to the music, based around a slinky bass hook and a spook show synth riff. Some of the synth sounds here are just awesome, especially if you’re a fan of ‘60s and ‘70s sci-fi music. The feeling here is relaxed but ominous until lead guitar cuts in and the pace really picks up.  It cools down and mellows out a lot at the end—a very cinematic piece of music and one of the longer cuts here

“Mysterium” kicks off with a choppy, nervous kind of rhythm interspersed with some dramatic bursts of keyboards. It’s also the first time we hear vocals—a haunting choir sings wordlessly in the background. This is a really progressive song that switches pace and texture a lot. The guitar solo really cranks hard! I get a King Crimson feel out of this one. It will keep you on your toes!

Purist Goblin fans may have difficulty with “Evil in the Machine,” which is a lot heavier and more propulsive than their soundtrack work. It’s also got a lot of robotic, Dalek-like vocals chiming in. This is a song that Pignatelli and Marangolo really dominate with bass and drum work. This is almost like a more cinematic version of Rammstein minus the thick German vocals. I enjoyed the track but it is definitely way different than the Goblin that did the ‘80s film work.

As if to atone for the aggression of “Evil in the Machine,” “Forest” could almost be by a different band. It is spookier, calmer and much moodier in tone. The keys take over here, including some great spacious organ work. You can really imagine wandering through a misty wood, searching for a female ghost in a billowing white dress. Smooth female vocals add to the dreamy feel.  Even the addition of drum and guitar doesn’t change the mood. This is one of the best tracks and one that should appeal most to old Goblin fans.

“Dark Bolero” has a dramatic Latin flair to it, with lots of layering. This sounds perhaps like a trip along the Italian or Spanish coast on a winding road. It’s one of the purer “soundtrack” cuts here and also one of the shorter songs. There’s some vocal work that sounds like a Gregorian chant added as well.

“Rebirth” ends the album in style. Quick drumming and swirling keyboards usher the song in and from there Goblin Rebirth adds their trademark layers of sound. Both guitar and keyboards interweave and again this song has a kind of Latin or Mediterranean feel.  There’s some smooth key work that reminds one of the Goblin heyday. It’s the longest track here, although at under eight minutes, it’s not the prog monolith one might have expected.

The album is supposedly the soundtrack to an “imaginary” film about the creation of an evil goblin-like creature. That gives you just enough information to add your own images in your mind. That’s always what Goblin was best at and here Goblin Rebirth continues in admirable style. Fans of progressive rock and adventurous film music can pick this up with no problem and I’m hoping Goblin Rebirth gets to actually score their own film sometime soon. 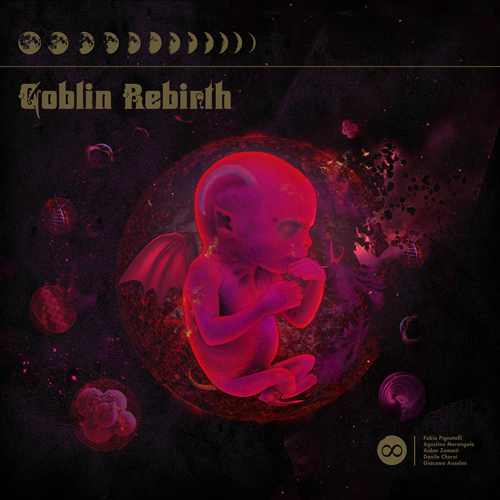