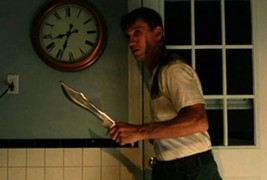 Trevor Juenger’s Coyote is as beautiful as it is grotesque. What masquerades as a film about an insomniac slowly losing his mind is, in essence, the visual poetry of trauma and insanity. It is a William S Burroughs nightmare fueled by a Cormac McCarthy fever dream. The score, by Michel Schiralli, is complicated and difficult. It enhances the unsettling quality of the film. The voice-over narration is achingly haunting. Bill Oberst Jr. in the role of Bill, the crumbling anti-hero, is elegantly resplendent. Oberst’s portrayal is at the same time repulsive and captivating. Bill is a maturated version of Gregor Samsa. He is a man so disassociated with himself that he pulls off his very own flesh to reveal the insect alien underneath.

Bill is caught in a mind- and soul-crushing reality of a banal day-to-day existence. This existence includes very little real human compassion. What results is not unlike a meth-induced paranoia. We travel with him on what becomes a frighteningly relatable descent into madness. He encounters and enacts unspeakable ills that are perhaps real or perhaps imagined. Whether real or imagined, it makes no difference as the mental horrors depicted are just as great if not greater than the physical ones.

The movie makes sense in the same way that a dream does. The images, random thoughts, memories, and feelings meld together to create a psychological truth. This truth lives within the character of Bill. The viewer is trapped within his mind. We are locked in and unable to escape even the darkest recess of his psyche as it becomes reduced to the most base thoughts of sex and violence. Within his horror-riddled mind, the only way to survive is with violence. It is a defense mechanism and a survival instinct as well as a response to his experience.

Coyote’s violence and pathos is reminiscent of Andy Copp’s independent masterpiece Mutilation Man. In Mutilation Man the pain, sorrow, anger, and confusion culminate in self-destruction. In this case, the violence is directed outward as well as inward. There is no destruction without self-destruction. Unlike Andy Copp’s meditation on pain, with Coyote there is no turning point that leads to healing—no redemption. No angels lift us out of our darkness and bring us into the light. Here we are kept in the dark to suffer and to molder with no respite.

Coyote is out now on DVD as of December 16th. You can order it from Amazon. 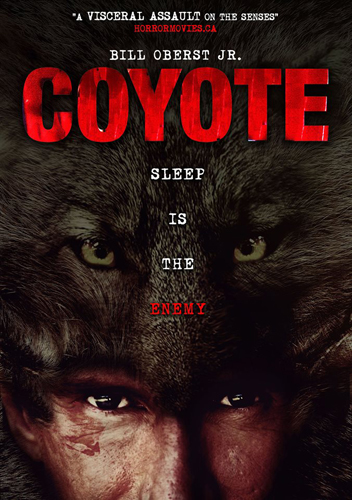