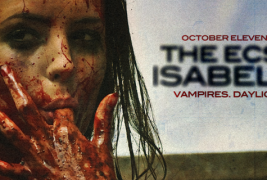 A while back, I had the opportunity to watch a creepy post-apocalyptic film called The Railway Children (now released by the name Children of a Darker Dawn) and interview the writer/director, Jason Figgis.  The film’s stuck with me since then thanks in large part to the amount of heart in the script – the image of these kids struggling to survive and find a place in their new, broken society struck a nerve.  So imagine my delight when another Figgis film landed in my lap – a story that’s a thematic sequel to Railway Children in some ways, although the plot is much different.

The Ecstasy of Isabel Mann is part detective mystery, part vampire story, and part lament about the pain of adolescence.  It alternates between two detectives investigating the mysterious disappearance of several teenagers from the high school of a sleepy little town, and Isabel Mann, a student who seems to be right in the middle of it.  Where other films might have drawn out the mystery, Ecstasy cuts right to the chase: Within the first few minutes, we watch Isabel’s horrifying induction into a cult of vampires, and we’re left to watch helplessly as her path collides with the investigators.

I won’t give away any more nuances of the plot, not because they’re kept secret but because they deserve to be revealed through the film’s slow, dreamlike pace.  This is a movie that tells most of its story visually and through its hypnotic score.  In places, it feels almost like an utterly macabre and disturbing music video – and somehow that works, maybe more effectively than it has any right to.  Instead of being told something, Figgis takes a subtler approach, simply opening the doors and letting us watch as Isabel’s life starts to unravel.  In the end, despite all that we’ve seen, the audience is left feeling sympathy and sadness for a character who’s as much a victim as the villain.

Thematically, Ecstasy is a story about adolescence – the loneliness, the alienation, the relationships and the changes.  I would recommend it to people who enjoyed Let the Right One In; The stories and monsters are very different, but the underlying themes resonate on the same frequency.

The performances, especially by the younger actors, are understated but authentic.  I will make the small quibble that at times the lines are delivered too quietly to make out over the occasionally-intrusive score, leaving you in the dark about what’s happening in some of the conversations (an American ear untrained to the actors’ Irish accents probably doesn’t help), but the visual impact of the storytelling is strong enough that you almost don’t need the dialogue to begin with.

Since it’s a story that relies so much on nuance, there are a lot of questions left unanswered – probably more than ones that get answered, honestly.  And that’s where the horror element comes into play.  The scariest things are those that we can never explain, and it’s these loose ends that resonate.  I’ll tell you this much: You may walk away from the film wondering, “What the hell did I just watch?” But once you’ve slept on it, bits and pieces will start to creep back, making you uneasy, literally haunting you.  And that’s the trademark of a quality film.