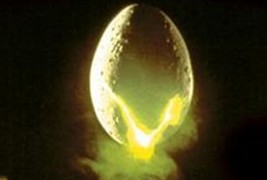 Like most horror fanatics, Alien was my first venture into the world of science-fiction terror. The film evokes such an inky black feeling of dread and tension, it remains to this day a film that sticks with me days after I re-watch it. Having recently read the novelization of the seminal film, I can say that Titan Books has done Alien fans all over the universe a great service by re-releasing this classic right in time for the film’s thirty-fifth anniversary.

When a small crew on a cargo spaceship inadvertently brings a malevolent alien life form aboard their craft, it doesn’t take long for things to start going terribly wrong. To no one’s surprise, the alien promptly begins picking off crew members one by one. We learn there are some ulterior motives going on with one of the main characters in the story and the greatest Final Girl in film history is introduced. Thus, arguably the greatest sci-fi horror franchise of all time is born.

Adaptations are a tricky business. Authors deserve far more credit than they tend to get when the novel is constructed effectively. Conversely, they hardly deserve as much criticism when the novel doesn’t work. In this case, the author deserves a rousing round of applause.   Alan Dean Foster is no stranger to film adaptations and has really made his mark in the sci-fi and action/adventure genre. Not only did Foster pen this extravagant novelization, he also did the sequel and the third installment of the Alien series.

Alien: The Official Movie Novelization, based on a screenplay by Dan O’Bannon and a story by O’Bannon and Ronald Shusett, was released in 1979 and is now available as a 35th anniversary re-release through Titan Books.

The adaptation follows the film pretty faithfully, although there are several little nuggets that diehard Alien fans will pick up almost instantly upon reading. Some obvious changes are that the Nostromo hauls crude oil in the book as opposed to mineral ore (as it does in the film) and the physical alterations to the facehuggers and aliens are quite obvious, although they do not take away from the film’s legendary Giger creations. Foster does what I love best in literature—he is vague with his character and alien descriptions for the most part, allowing the reader to either envision the film characters if they prefer or one can easily create their own image. Fear of the unknown always works best in literature, and what better work of fiction to play by that rule than the greatest outer space horror ever imagined?

Some scenes in the book didn’t make the final cut of the film, which leads most to believe Foster was adapting an early script for this novel. Most of these missing scenes are a part of the Director’s Cut DVD and Blu-Ray, so it’s very cool to see them brought to life through prose. 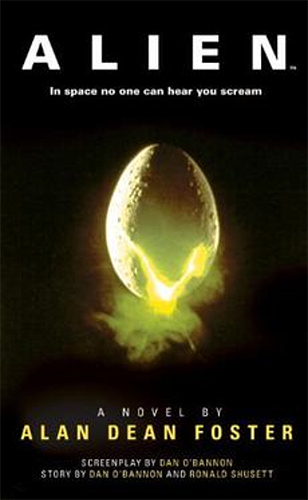 I also loved having a more intimate connection to three of the most iconic characters in sci-fi cinema history. Reading through Ripley, Ash and Dallas gives us an even more in-depth understanding of their characters and what exactly they’re going through during this fateful expedition. I really liked that Ripley and Dallas are even more leery of Ash’s behavior and motives in the book. We get the feeling that Ash is up to no good a tad earlier in the book than in the film. Rest assured, Ripley and Dallas aren’t fooled in the slightest.

This book also includes one of the best horror excerpts I’ve ever read, when Ripley discovers Brett and Dallas’ bodies in a horrifying state. Talk about late-night goose bumps! If you’re a hardcore Alien fan, you’ll enjoy these subtle nods to the film and “bonus” additions as well as others I won’t mention so as not to spoil any of the fun this book provides.

This novel is truly serious science-fiction. While the film was closer to all-out terror, the inclusion of things like how the spaceship runs as well as a few biology lessons on the way these aliens live make the novelization a much more pure strain of sci-fi. I felt like I was reading Lovecraft on LSD through many chapters and, let me tell you, that’s as far from a slight as I can give a sci-fi book. There isn’t much this book is lacking and for such a heavy sci-fi trip, the pacing is perfect. Much like the film, it doesn’t take long for the suspense to start ramping up and leaving the audience sitting (and, in this case, reading) on the edges of their seats.

Another franchise that’s been put through the wringer with sequels, comics and lesser novels, Alien is rightfully atop the sci-fi horror mantle and Foster’s novelization is an excellent companion. Alien: The Official Movie Novelization is a hell of a fun and terrifying read. It’s one I recommend to anyone who loves the film or a good old fashioned sci-fi romp through the hell in our stars.

** As a cool side-note, Titan is also re-releasing the sequel Aliens and the third installment of the franchise, Alien 3, as novels in the upcoming month. Both are written by Foster, as well.