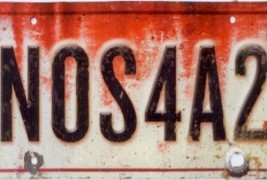 When you were a kid, what was your favorite holiday? Considering that the name of this magazine is Ravenous Monster, it’s probably a safe bet that most of you just said, “Halloween.” What about Christmas? Did any of you ever enjoy eating candy canes whilst sledding through the big white yonder? How about snacking on well-cooked ham (or whatever vegetarian/vegan substitute there is for ham) and drinking eggnog? Even if you are one of those joyless souls who answered no on both counts, one must recognize that there is something special, something magical about the Yuletide.

Joe Hill, the author of such previous home-runs as Heart-Shaped Box (2007) and Horns (2010), returns in this, The Year of Our Lord 2013, with his most festive novel yet. NOS4A2 (which is a license plate’s rendering of “Nosferatu”) is not only a new take on the figure of the vampire, but it is also a re-imagining of Christmas, or, more specifically, Christmasland. Christmasland is the province of one Charles Talent Manx, a pedophile, murderer, and all-around bad dude. You see, Mr. Manx is the vampire of the title: an emaciated, deathless vulture who preys on children under the perverse logic that he is “saving” them from the sinfulness of the adult world.

How does Manx know that the children he “saves” would’ve been doomed to worse fates if they had lived? Well, Manx is a talented man with an incredibly potent imagination. In fact, Christmasland exists totally within the confines of Manx’s own head. Christmasland is Manx’s inscape, a theory that embraces the notion that certain individuals are capable of turning their inner lives into tangible realities, which, in turn, mirror the personalities (or monstrosities) of their creators. Therefore, Christmasland, the creation of a loathsome vampire-like murderer, is decidedly parasitic and frightfully inhuman. The Christmas music-laden, snow-drenched shadow play of Christmasland hides the fact that it is entirely founded upon the lost souls and youth of formerly content children.

Manx is an extraordinarily powerful villain, a monster who, even when he was a man, leeched the fun and vivacity out of his wife and daughters (see: killed them), thus earning him and his 1938 Rolls Royce Wraith the vampiric nickname that is derived from the first movie he ever saw with his soon-to-be-departed wife. Such a character deserves an equally fetching counterpart. Enter Victoria “Brat” McQueen, another master of the inscape. In NOS4A2, we, the readers, get to watch Vic McQueen transform from a typical New England kid in the late 1980s into a recovering alcoholic with PTSD in the late 2000s.

If these were the only significant facts concerning Vic McQueen, then NOS4A2 would be less of a novel and more of a mismatch. What balances the Manichean duality in NOS4A2 is Vic McQueen’s Short Way, a bridge that can transport her from one point to another. The Short Way, a traditional New England covered bridge with all the necessary bats, allows Vic McQueen to travel through her own inscape, which mostly runs between New Hampshire, Colorado, and Iowa.

In New Hampshire, we watch as the McQueen family crumbles (or, bearing in mind Christopher McQueen’s profession, explodes), all the while “Brat” transports herself to Gunbarrel, Colorado, the location of Manx’s diabolical Sleigh House. Vic McQueen’s first trip to the Rockies is an ugly one, and it sets the basic plot of NOS4A2 in motion, which is more or less a long, protracted chase scene that spans decades, several states, and several territories within several brains. Along the way we meet Louis Carmody, a corpulent fan boy with a motorcycle and the novel’s biggest heart, Margaret “Maggie” Leigh, a stuttering librarian in Here, Iowa with a penchant for drugs and a clairvoyant’s way with Scrabble tiles, Bing Partridge, a rhyming dolt who helps Manx in all his endeavors via gas taken from your neighborhood dentist, Bruce Wayne Carmody, Vic and Lou’s son, who becomes Manx’s target throughout the novel, and Special Agent Tabitha Hutter, the standard law enforcer who gets caught between procedure and faith.

Taken as a whole, the cast of NOS4A2 is a compelling one, revolving around unique individuals who manage to both flirt with and skirt stereotypes. As with most horror, our protagonist is a troubled female who manages to find some inner mojo after pages of torture, while our antagonist is a vile, decrepit male with serious problems in the lady department. Around these two towers are a motley assortment of rouges, ruffians, and sometimes refined folks. Say what you will about Joe Hill’s books, but the man knows how to paint believable portraits of real people dealing with really out-there situations. This, of course, Mr. Hill inherited from his father, the great Stephen King. Much like the elder King, Hill’s novels typically taste and feel like reports on small communities and microscopic depictions of lives trapped inside of horrible vacuums. NOS4A2 somehow manages to hold together a cohesive storyline and group, despite the fact that it spans a lengthy time period and various locales, some real and some imaginary.

The one unfortunate lesson that Mr. Hill learned from his father is the one about the doorstop, i.e. the art of making a novel that can double as a doorstop. NOS4A2 is close to seven hundred pages: a three digit number that should keep those on the fence away. NOS4A2 moves incredibly fast though, and any reader with a modicum of staying power should be able to easily consume Hill’s latest novel within the one week time frame. That said, while NOS4A2 is suitable for all newcomers to horror or modern speculative literature, the novel is truly a treat for the nerds and diehards. Figuring out the meaning behind Manx’s license plate is one thing; recognizing that “Tabitha Hutter” is a nod to Thomas Hutter, F.W. Murnau’s Teutonic version of Jonathan Harker in Nosferatu (1922), is another thing all together. NOS4A2 is rife with allusions and references to not only Hill’s other two novels, but also to such family-related novels as It and The Dark Tower series.

In short, NOS4A2 is not only a feast for the eyes (thanks to the artwork of Gabriel Rodriguez, Hill’s compatriot on the ongoing comic book series Locke & Key), but its wine for the brain, too. NOS4A2 is not only an intelligent novel, it’s also a damn fun one. At the risk of sounding hyperbolic, Joe Hill is a better writer than his father (especially now), and his latest novel proves it. NOS4A2 may be unwieldy and too elephantine at times, but it forms a perfect circle by the novel’s conclusion. So, if you’re the drinking kind, open up some juleøl, forget about the summer heat, and settle down to some surreal, wintry cheer with NOS4A2.

NOS4A2 is now available from William Morrow, an imprint of HarperCollins Publishers.