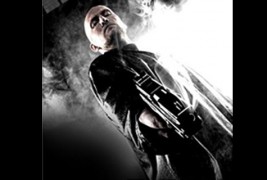 M.R. Gott’s Where the Dead Fear to Tread is a cross between a supernatural slasher story and a pulpy noir crime drama—sort of like if Max Payne were directed by a young Clive Barker.

The story opens with a highly pornographic and gorily detailed description of two young parents going at it before the main villain — the mysterious and demonic entity known only as “The Devourer” — joins in on the action by biting out their throats.  Then he/it enters the other room to possibly satisfy his voracious appetite, leaving the reader to wonder: “Who is this Devourer? And is he really going to eat a baby?!”

While these questions are lingering in our minds, we’re hit with the action-packed introduction of our vigilante anti-hero, William Chandler, a former state prosecutor with a 90-percent conviction rate turned sledgehammer-wielding, gun-toting, serial killer with a 90-percent murder rate.  Ever since his husband (William is gay) and adopted son were murdered, William’s been on the streets murdering child killers.  William kills a group of kidnappers who are working a child slavery ring. The next day he attends the funerals of the people he murdered, which is his standard practice. He needs to see the human side of the people he’s killed. This is part of the misery that William brings onto himself to fuel his ultimate self loathing as someone who feels forced to kill these vile people because no one else will.

It’s an ambitious stab the writer makes at trying to give a stock character a new perspective. Not only is William gay (not yet a typical character trait in books such as this one), but he tries to sympathize with his enemies even if they’re scumbag child enslavers. Gott is attempting to give a third dimension to this otherwise 2-D stock character. This device works a little better during a second funeral scene by painting a clearer picture of William’s unique set of emotional connections between life and death.  He has a flashback of his husband’s funeral which is where the old William died in spirit and was replaced by a spirit of vengeance. The funeral device is also integral to wrapping up some of the main character’s emotional ties.

William’s skills as a vigilante child avenger are put to the test when he meets a ghostly woman, dressed in all green, named Esponiza.  She asks him to save a young boy named Jeffery Williamson who’s held captive in a mental hospital that’s controlled by a demonic doctor in league with The Devourer. William reluctantly accepts the task and breaks into the mental hospital with a sledgehammer, beats down a few demons and gets the boy out in one piece.

After saving the boy, a relentless, tough as nails detective who cusses way too much, named Kate Broadband shows up to try and arrest William Chandler for his vigilante serial killings. William gives Kate the slip, and the boy is put into police custody under the care of Famke Phoenix — an Asian, African, British social worker and secret psychic telepath who realizes young Jeffery has a strange psychic gift as minions of The Devourer seek to capture the boy. Famke escapes and goes on the run with Jeffery to an old coven/school she used to attend in the hopes that they can protect him from the evil forces trying to capture him.

Meanwhile, William teams up with a half-man, half-werewolf named Quinell in an effort to stop The Devourer. Quinell takes William to an exclusive night club for ghosts and ghouls where William is introduced to a wannabe wizard named Galilee who sports an impressive bag of tricks, including a small arsenal of magic weapons and a collection of homemade 50 cal. Vampire-stopping bullets. Galilee dishes out a little more info on The Devourer revealing that he’s a vampire and necromancer who’s possibly the head of the biggest child slavery network in the country, one that he uses to keep a constant supply of children that he can…devour (hence the handle) because apparently most vampires consider human children a delicacy like fine-uh-veal-uh-parmigiana! 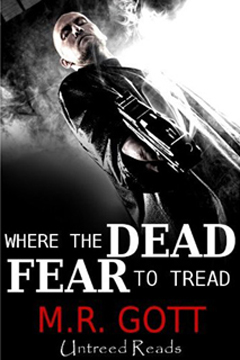 As Quinell and William continue their hunt for The Devourer, Kate Broadband is continuing her hunt for William.  In doing so, Kate ends up crossing over into the world of the paranormal, fighting through undead, maggot-filled henchmen to find William and get to the bottom of what the heck is causing all the wacky super-natural chaos.  And that, ladies and gentlemen, is the “basic” premise.

As exciting as the plot can be, the author often leaves too much to be inferred by the subtle context of his descriptions. For example, during the scene in which William rescues Jeffery from the mental institution run by the demonic Dr. Chimera, we (the readers) walk with William as he goes about his business smashing open doors with his sledge hammer to find Jeffery; all under the pretence that this place where the boy is being held is a real hospital that’s just horribly run down. This attempt at suspense seems to lend itself more to confusion than tension, mainly because the character’s not alluding to the strangeness of his surroundings, and the fact that the whole narrative is written in the present tense makes some of Gott’s attempts at suspense, like this one, all the more misleading.

However, despite some muddled suspense scenes, M.R. Gott has a knack at putting together vivid descriptions of action and sex with no hint of confusion. The sex scenes are pornographic and might leave a bad taste in your mouth (boom!), but the violence described in the fight scenes is wonderfully cringe-worthy with every blood-spraying, bone-crunching, and gut-wrenching evisceration, be it by gun, fire, or steak knife.

There’s a fight scene where William takes on a handful of mobsters who are armed to the teeth in a gangster hangout called The Horse and Buggy.  All William needs are some nearby steak knives to fuck up the gangsters beyond repair. Somehow during the course of this insanity, Gott manages to keep the intense pace of the scene without confusing which knife is being stabbed where, and he paints dramatic images with the use of quick-but-colorful descriptions of the edges of the knives in William’s hands snapping off the bones of his victims which almost makes you feel every vibration of the stabbing blade as William scrapes it off someone’s skull.

In sum, there’s a lot of sex, blood, and maggot guts spilling out through the electronic pages of this story, and even though the book tends to read like a wild B-movie which, in the right hands, could be adapted into one hell of an RPG video game or a horror mini-series like True Blood, the book is a dark fantasy with a cast as big and as bold as its plot. It has necromancers, wannabe-club-rat-wizards, demonic doctors, vampires, ghostly tormentors, psychic children, witches, warlocks, cops who cuss too much, magic-maggot-infested-zombie-henchmen, stunted werewolves, child-eating poltergeist-fucking vampire-mob bosses and a gay man with a sledge hammer who has a lot of issues with his profession as a serial killer.

All of this is somehow interwoven and provides the beginnings of an ambitious universe in what is essentially a 129-page pilot of this book series. It’s an interesting read that may get more interesting as the series continues, and who knows? It could be a future movie or video game franchise hit that you can brag about having picked up when it was just a humble indie e-book. Give it a chance and you may be surprised to find out Where the Dead Fear to Tread.