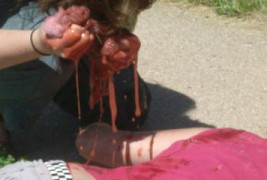 The Master of Splatter, Tom Savini, once said, “Limitations, like no money, always make you more creative and the fun is creating that stuff.”

I have always had a hyperactive imagination. The film bug first bit me as a freshman in high school. On a boring summer weekend with my sister and me hosting our best friends for a sleep-over, we created a movie that ran about nine minutes long. A serial killer was tormenting a small town and two detectives on the case are murdered by the killer before they can get any valuable evidence against him. My sister played the main scream queen, getting butchered on the living room couch by the maniacal killer. His weapon of choice was an incense holder. God, it was exquisitely horrible. But man, was it fun!

Some ten years later, I am able to use these improvisational skills yet again to make another of my horror ideas come to life.

With a budget sitting at $63.34, it’s safe to say ‘DEAD.’ won’t be breaking any summer blockbuster records, but with limitations comes creativity.

‘DEAD.’ is based on a short story of mine entitled, “It’s Going Around” and it’s influenced by Night Of The Living Dead (1968) as well as the 1990 remake of the George A. Romero classic, by Mr. Savini.  In my film, three young women are roommates and each see the zombie outbreak begin to take over their town in different ways and at different times of the film. Their objective is simple – stay alive until help can be reached.

What this project lacks in finances, it makes up for immensely in enthusiasm and creativity.  I’m blessed to have an awesome cast and crew who are about as willing as they come.  A project like this desperately needs that unbridled, all-in approach to work. This gung-ho attitude goes a long way, especially when you have to convince teenaged girls to let you douse them over the head with reeking green chunks and bloody slime. 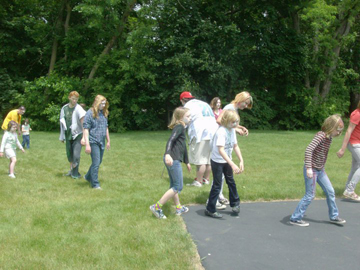 To their credit, there hasn’t been a single whimper or grumble amongst the twenty-five or so zombies. They’ve ruined clothing and subjected themselves to extra long showers, all for the sake of cheap horror.  I love them all, from my awesome trio of leading ladies (Eryn Stilp, Molly Ward and Timika Williams) to my fantastic zombie horde (ranging in age from 11 months to 50-plus years young).  I could not have dreamed up a better group to work with.

The fact that two families with young children drove an hour each way to help out just blows my mind. Co-workers of mine were coming to the set an hour before their work shifts to help in any way possible. Caravans of the undead were rolling through Waukegan throughout the entire weekend. If you looked closely enough, there were more than a few small clusters of ghouls wandering the streets on foot from location to location.

These people have also hit Facebook pages across the country to spread the ‘DEAD.’ – from tagging dozens of photos to giving shout-outs in their status updates. It’s truly been awesome. It’s also been a real inspiration for me as a director to make this the best low-budget zombie flick I possibly can.

The art work for the film was done by a great friend who also volunteered his incredible skills.  Kevin Spencer is one of the most talented artists in the horror industry and I highly recommend checking out his stuff at his website, www.inkspatters.com!

I’ve asked several people helping with this project why exactly they would do something like this. The answer has been consistent and simple: “It’s fun.” A novel idea – working on a project simply for the sake of fun. God knows there won’t be any bucks made from this film (1) , and aside from Rice Krispie Treats, bottles of water and the occasional pizza, these folks are doing all of this for a copy of the DVD and, again, the simple fun.

The gore has been, without a doubt, the most fun aspect of this project for me.  I’ve used a handful of different blood concoctions that have cost little more than a few dollars. Most have consisted primarily of corn starch, raspberry Crystal Lite mix, corn syrup, cherry gelatin mix, red dye and pancake batter.  My guts, if I may say so myself, are pretty solid. Pillow stuffing simmering in a brew of raspberry jam, watered down oatmeal flakes, corn syrup, cherry gelatin mix and green dye gave me roughly ten gallons of splatter sauce for about eight dollars. 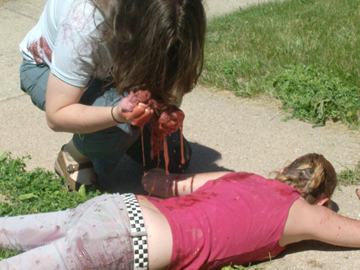 To achieve maximum audio pleasure as well as a sufficient splatter effect during a few zombie skull bashings, I went as cheap as possible. The end results have been quite wonderful. I took a small baby blanket, balled it up and plastic-wrapped it some eighty times over. I left enough room at the top of this ‘skull’ uncovered so I could remove the blanket with ease. The hollow spot then became a wonderful home for a few cups of crimson chunks. That is, until a baseball bat met the plastic with a solid thump and gore flew everywhere.

Even the zombies themselves added a few cool little tricks to the film. With a few cheap fake fingers sitting in a bag, unused, one of my zombie stars (Omi Doss) suggested we stick them to the end of a fork. By closing an apartment door on the fork, we now had the illusion of zombie fingers being smashed by the slamming door after our leading lady gets chased up the stairs by a few angry zombies. When the cameras started rolling, the zombies stood behind the closed door, wiggling the fork up and down to allow the fingers to move slightly. Brilliance!

While it may seem like everything has gone perfectly, there has been a fair share of obstacles. While most films hit a snag at one point or another, I’ve quickly learned that an ant hill becomes a mountain especially quickly when it comes to a low-budget project.  Aside from a few casting hiccups early on, the biggest obstacle for this film has been the part of production I love most – the scares.

I wanted legitimate terror from my leading ladies. Considering this budget didn’t quite fit the likes of Meryl Streep or Kate Beckinsale, I had to figure out a way to get the most out of amateur actresses who’ve proved to have some real chops.  To get there, it was a no-brainer. I would have to scare the crap out of these girls in real life.  If our leading ladies’ screams, facial expressions and full body spasms seem incredibly real, that’s because they are.  Sure, I endured a few dirty looks and may or may not have given someone a small heart attack. But at the end of the day, we got the shot we needed and the scare I wanted. 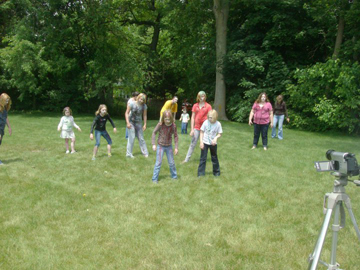 I’d delved into the special features of one of my favorite terror films, The Strangers, shortly before filming began.  The extras feature an awesome little documentary on the terror device of the film.  Director Bryan Bertino and actress Liv Tyler explain how in order to get the adrenaline pumping and the real terror to show on camera, Tyler was subjected to running laps and doing jumping jacks before scenes to get her heart racing. The sound guys made their creepy noises from all areas of the set to ensure Tyler didn’t know which noises were coming or at what time. A trick as simple as that brings out the best horror in Tyler and makes an already solid film that much more terrifying.

After filming some of the key scares this last weekend, I say Hollywood can keep the Tylers, Streeps and Beckinsales of the world. I’ve got my gals and wouldn’t trade them for the world.

With roughly a week of filming remaining, the zombie invasion is just about over…for now. Until the next journal entry, please feel free to toss me a line on Facebook add the JHhorrors fan page to your list. It’s greatly appreciated and you can keep posted on the project on a daily basis. I will be keeping folks updated on premiere dates that are currently in the works. I will also begin running contests and trivia to give away copies of the DVD. Keep screaming everybody! –JH

1) Any money earned from DVD sales will go towards my next project, slated to start filming in October.