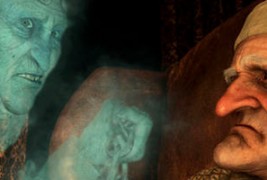 There are a handful of things that are always easily associated with the Christmas season:  gifts, evergreens, Christmas carols, long lines at Wal-Mart, Facebook arguments about the “reason for the season.”  But here’s one long-standing Christmas tradition that might not come immediately to mind:  Ghost stories.

There are hints and vestiges of this tradition lurking beneath the surface of the usually cheerful holiday celebrations.  Take, for example, that curious line from “The Most Wonderful Time of the Year,” where Andy Williams croons, “There’ll be scary ghost stories/and tales of the glories/of Christmases long, long ago.”  And, of course, Charles Dickens weaves a ghost story that’s simultaneously heart-warming and terrifying:  A Christmas Carol, a time-honored classic that has been adapted more than 30 times across various media.  No matter how many times the details change – as characters become Muppets or animated ducks or sassy female publicists – the ghosts are never snipped out of the story; they’re integral.

Here’s another Christmas tale that references ghosts:  “Old Christmas Morning,” a poem by Roy Helton.  In Helton’s tale, Christmas Eve becomes a night when strange, supernatural events occur:  spirits walk among the living, bushes bloom in the middle of winter, beasts act strangely.  This eerie world then becomes the backdrop for a tale of ghosts, murder and revenge.  Not a very festive tale, perhaps, but certainly one that horror fans can get behind.

The concept of “Old Christmas” – as shown both in Helton’s poem and the appearance of the ghosts in A Christmas Carol – traces its roots back to the ancient tradition of Yule.  Long before Christianity, ancient people would celebrate the Winter Solstice, or longest night of the year, which occurs on December 21st.  It’s hard for us to appreciate its significance today, in a world where we’ve conquered electricity and can visit the 7/11 any time during the night, but long winter nights were once a pretty big deal.  In the cold and dark of ancient times, it was easy to lose hope that winter would ever come to an end.  The solstice was the beginning of the end of winter; once you survived that night, the promise of spring wasn’t far away.

It’s of little surprise, then, that the solstice began to pick up a spiritual and supernatural significance.  The solstice is a powerful symbol of death and rebirth:  As the longest night of the year, it signifies the long sleep of death, but it also marks the first day of the earth’s rotation back toward the sun as the seasons are reborn.  With so much death, birth and new beginnings being tossed around, it seems inevitable that the barriers between the worlds would start to come down.  In Druidic traditions, the Winter Solstice is second only to Samhain as a night where the barriers between death and life begin to fade and spirits pass freely through.

It’s also not surprising that Christianity would co-opt these existing traditions when choosing a significant religious holiday of its own.  After all, the tale of Jesus is something of a ghost story in itself, and resurrection is one of the cornerstones of the religion.  Why bother trying to create new symbols of death and rebirth when a perfect celebration already existed?

Christmas has undergone plenty of changes since its first arrival.  In Medieval times, the holiday was a religious celebration that lasted for twelve days and incorporated traditions of Saturnalia and Yule alongside Christian religious practices.  By the Victorian era, when Charles Dickens was writing, Christmas was in the throes of an identity crisis, and every household celebrated the holiday differently.    The Industrial Revolution made an indelible impact on the holiday.  People could no longer afford to take twelve days off of work to celebrate, and capitalism prompted the new shift toward consumption and gift-giving.  More recently, the economy has prompted plenty of people to turn away from that model of rampant consumerism and focus on other elements.

The Christmas we celebrate today is an amalgamation of traditions whose significance has been lost or forgotten by most, and this colorful hodgepodge is one of the most endearing parts of the holiday:  It’s a time of year that can mean almost anything to almost anybody, but it’s always a cause to celebrate.  And for horror fans, it’s perfectly reasonable that a celebration should include some elements of darkness.

One thought on “The Ghosts of Old Christmas”