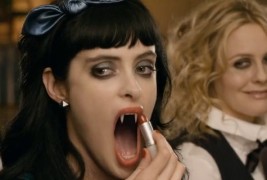 I saw Vamps in a nearly empty theater with my wife and a few, scattered Egyptian couples.  They didn’t seem to enjoy it much more than we did.  Like a horse with a broken leg, Vamps is lame beyond hope of healing.  But like the farm boy who ultimately gets handed the shotgun, I won’t have much fun putting it down.

Directed by Amy Heckerling (Clueless, Fast Times at Ridgemont High), Vamps stars Alicia Silverstone and Krysten Ritter as Goody and Stacy, two vampires posing as college co-eds in New York City.  Having sworn off human blood, Goody and Stacy support themselves as exterminators who catch and drain rats—sometimes through a straw.  Between the headaches of the dating scene, the demands of their non-rodentarian creator Cisseras (Sigourney Weaver), and Stacy’s new relationship with a dreamy film student named—what was it? Oh yeah—Joey Van Helsing (Dan Stevens), you know there’s a whole passel of wacky hijinks and hilarious misunderstandings waiting in the wings!

When horror-comedies work, it’s because they either play the excesses of our beloved genre for laughs (think the over-the-top gore of Dead Alive) or because they explore the potentially funny aspects of vampirism or lycanthropy or living through the zombie apocalypse (An American Werewolf in London, Cemetery Man, Shaun of the Dead).  Vamps fulfills neither criterion.  It gives us an uninspired support group for bloodsuckers trying to quit preying on humans and an inane opening at a goth club.  It plods through all the by-the-numbers coffin sex sight gags and “bite me” one-liners we expect.  It drops all the mandatory Dracula references (did the requisite gay best friend really have to be named Renfield?) and makes a few quarter-hearted attempts at gross-out humor (most memorably when Goody sticks her tongue up the bleeding nose of a coke-snorting one-night stand).  To call Vamps terrible gives it a memorability its averageness can’t really support.  It’s also unfair.

Hollywood legend is filled with dire tales of executive meddling.  Pretty Woman began as a gritty, Taxi Driver-like drama about a prostitute and her john.  The recent remake of Superman was famously afflicted by a producer who insisted the scriptwriters (including Kevin Smith) make all manner of changes (including the bizarre requirement that the Man of Steel fight a giant spider).  I don’t know anything about the production of Vamps, but I suspect it was not written as a romantic comedy.  On the contrary, before some producer or marketer or exec reskinned it, I think Vamps was probably a well-written and thoughtful horror movie.

What this film gets so brilliantly right, when it’s not falling back on jokes that would have made Bela Lugosi roll his eyes, is the sense of history so often alluded to but so seldom explored in vampire media.  Vamps opens with Goody recounting her story–her turning in 1841, the excitement she felt when electricity made nightlife possible, the invention of cinema, a medium that gave people an immortality like her own—told through the creative use of nineteenth century prints and early film clips.  Stacy, turned in 1992, doesn’t understand Goody’s obsession with old films, her dislike of technology, or her weariness with the pace of change.

This interest in history is an exasperating road-not-taken in Vamps.  Somebody clearly did their research here.  We get an appearance by Malcolm McDowell as Vlad Tepes (they even pronounce “Tepes” right), we see vampires from Kush and Turkey and the Soviet Union, but nothing’s ever developed.  When Goody runs into an old boyfriend from the ‘60s, we feel a real poignancy.  He’s aged, married, and moved on; she’s the same girl who fell in love with him at an anti-war protest and always will be.  Vampire movies and stories pay a lot of lip-service to the “curse of immortality,” but few of them articulate why being young and hot forever would be a bad thing.  Incredibly, Vamps does.

Tickets in Egypt are cheap, but when it costs forty or fifty bucks for an American couple to go to the theater (assuming you want popcorn and soda), I can’t counsel anybody to waste their hard-earned cash on a film as muddled, directionless, and  unfunny as Vamps.  Whether you want vampires, horror-comedy, or a really bad movie to make fun of, this film won’t satisfy you.  If you want to write about vampires, though, you could do worse than to wait a few months, add Vamps to your Netflix queue, and take some notes.  Failure though it may be, it’s no Twilight. 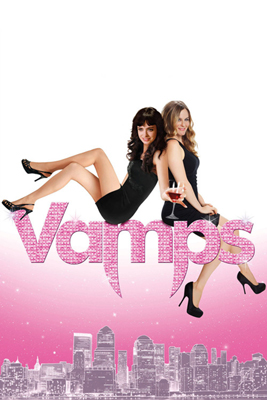 One thought on “Vamps Movie Review”