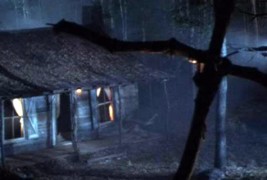 I’m a pretty big fan of Sam Raimi’s original trilogy (in fact, less said about Spidey 3 the better).  I revisit the Evil Dead films pretty often and here is my list of the top 10 moments.  My credentials for this list are a collection of Evil Dead and Army of Darkness figures, comics, shirts and video games.  Oh, and I have the cast score of Evil Dead The Musical as well.  If after you read my list you think I’ve made an error or omission I’d be curious to hear from you, so leave your feedback below. 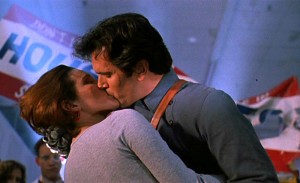 I know this is not the original ending, or even the preferred ending of Raimi and Campbell.  I know this was shot for the studio, and as much as it hurts my rebel (alliance) heart to agree with the suits, I do.  At the end of each movie Ash defeats the evil deadites, and still loses.  Here he goes out with a bang and a hail to the king, baby! 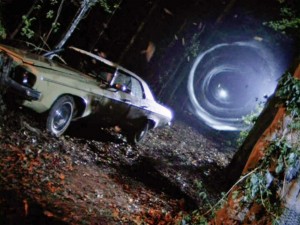 It’s my list and I’ll tie if I want to.  Whether it is the evil cam running up on Ash at the end of the original, or being sucked into a vortex in Evil Dead 2, Ash can’t catch a break. 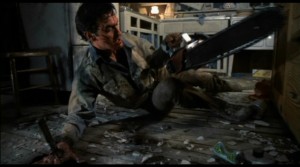 When Ash’s hand becomes possessed it sets off one of the best series of events in the series.  From being smacked around by himself to the geysers of blood after Ash severs his hand, this is an incredible sequence that never gets old.

4. Army of Darkness, the pit 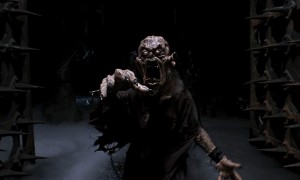 After being captured by Lord Author’s men Ash is brought to the precipice of a pit that after spewing out a geyser of blood, he is thrown into and forced to fight off a collection of deadites as spiked walls close in on him.  This sequence perfectly captures the absurd tone of the film, while staying true to the legacy of The Evil Dead.  And he has chainsaw-hand. 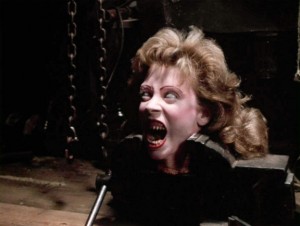 After decapitating his girlfriend Ash is attacked by her possessed head, which switches between begging for mercy and yelling threats…before he’s forced to split it with a chainsaw.  Denise Bixler is the best of the three Lindas in my mind.  And she earns it here by playing a sympathetic figure and a psychotic deadite simultaneously. 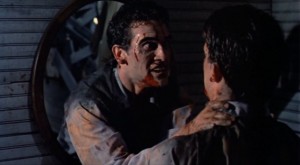 Ash needs to get ahold of himself in this is quiet moment that ends abruptly as the intensity of the film is ratcheted up another notch.

7. The Evil Dead, guess my card 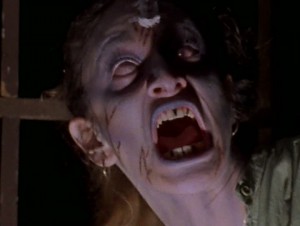 A scene so good, Ghostbusters ripped it off.  This is a great reveal of a deadite, with near perfect misdirection.  While looking out the window Cheryl calls out cards interrupting Linda and Shelly’s card game.  When the camera finds her she spins around possessed.  “One by one we will take you,” she taunts before she begins to levitate. 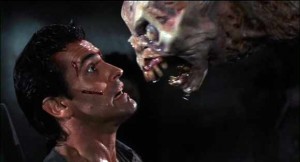 From the sweet old woman in the fruit cellar, to the threat spewing corpse, and finally a mutating fucked up demon, sweet Henrietta keeps you guessing.  Her reveal while the tape plays on the recorder as Ash is locked in the basement is amazing. 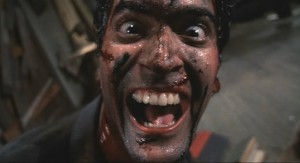 Most of us have a pretty low threshold for stress.  You stay pissed off for hours if some schmuck cuts you off on the highway.  Now imagine you’ve been forced to kill your girlfriend, more than once and then battle your own severed hand.  Ash loses it, and has a nice laugh with a moose’s head.

10. The Evil Dead, Cheryl is in the cellar 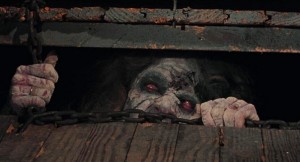 “You’re not gonna leave me here, are you? Are ya, Ash?”  Cheryl taunts from a small gap in the chained cellar door.  Her threats and commentary from the basement as she reaches out to swipe at the cabin’s inhabitants is iconic and the stuff of nightmares.