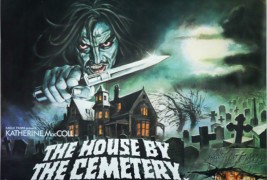 By this point, I hope you know the deal. 1981’s The House By the Cemetery (Quella villa accanto al cimitero), which features in the opening of the video for the band Entombed’s “Left Hand Path,” is, to quote a Time Out magazine review, “cut-price spaghetti gore cooked up from the not exactly brand-new narrative premise of a nice middle class family moving to a house in New England with a sinister sitting tenant, the nefarious Dr. Freudstein.” Although he was a naughty surgeon in the 19th century, Dr. Freudstein is still a kicking and groovie ghoulie, and when those pesky Boyles from New York City move in, he welcomes them to his home by butchering them and their acquaintances. He’s essentially a Yankee Count Dracula, but with atrocious table manners.

No, I won’t insult you by opening up again that particular tin of tuna about how disordered most of Lucio Fulci’s films are. Like City of the Living Dead and The Beyond before it, The House By the Cemetery tells a disjointed tale just in order to ply its gross-out trade with drawn-out murder sequences that involve fire pokers, knives, and even bare hands. Even though The House By the Cemetery tells the most consistent yarn of all the “Gates of Hell” films (more on that later), that just means that it might not be the first film picked for a Razzie (or whatever the equivalent was in 1981).

Nope, I want to start this final installment of my “Gates of Hell” retrospective series by talking briefly about me—numero uno, kemo sabe, Joe Bob Briggs in a younger, probably less attractive body. The House By the Cemetery was the first Fulci film I ever saw. It came as part of a 9-film DVD multipack that I bought at some music store that probably no longer exists. In three discs, this zombie-themed bundle of fun features ranging from Night of the Living Dead to King of the Zombies, a World War II-era goof reeler that pairs foreign secret agents with a bug-eyed manservant who can scratch off plenty of notches in the stereotype column. As with most cheap DVD packages that feature movies in the public domain, this one contains films of varying degrees of quality, but all the films are ultimately satisfying because their intended demographic enjoys pulp, both good and bad. However, The House By the Cemetery is the one glaring exception to the rule. While the other films in the collection are relatively tame and decidedly blood-free, The House By the Cemetery is a grotesquerie for gore-hounds by comparison. When I first saw The House By the Cemetery, I was still young and squeamish and therefore I refused to re-watch the film for several years. 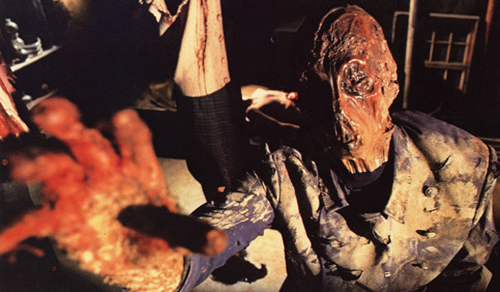 Now, as a man fully comfortable with watching the most egregiously antisocial acts performed on celluloid, I can say that The House By the Cemetery is Fulci’s understated splatter flick. Sure, there’s maggots (in one hard-to-watch scene, Dr. Norman Boyle [played by Paolo Malco] casually walks up to the monstrous Dr. Freudstein [played under a mask by Giovanni De Nava] and stabs him in the stomach, thus producing blood that looks like brown curry and a swarm of yellow maggots), but there isn’t any prolonged regurgitation of abdominal organs, nor are there scenes depicting how an acid bath exfoliates the skin. The House By the Cemetery is Fulci’s Cobra—a film that tries to be both muted and full-frontal at the same time. As in the case of Cobra, where Stallone tries to be subtle by mumbling more incoherently than usual, The House By the Cemetery occasionally falls flat on its face, but that’s why we love Fulci and his “Gates of Hell” trilogy, after all.

The plot of The House By the Cemetery can be summed up briefly: the Boyle family—Dr. Norman Boyle, Lucy Boyle (played by Fulci stalwart Catriona MacColl), and their pillow-lipped son Bob (played by Giovanni Frezza)—leave their New York City apartment for the small Massachusetts town of New Whitby (an intertitle erroneously refers to the town as New Whitby, Boston). The move is precipitated by Dr. Boyle’s interest in carrying on the research left behind by his colleague Dr. Peterson, who not only killed his mistress, but also committed suicide all before the film’s opening scene. Oh, and the extra $5,000 a year doesn’t hurt either, as Dr. Boyle likes to remind his high-strung, pill-popping wife.

Before leaving New York, Bob admits that a strange girl has been warning him away from traveling to New Whitby for some time. The girl lives in a picture in the family’s apartment. The picture itself represents a fairly rundown looking house—a house that will later be revealed as the cursed Freudstein house. Not long after arriving in New Whitby, Bob begins hanging around with the girl from the picture, who, as it turns out, is named Mae (played by Silvia Collatina). Mae seems to have a supernaturally acute awareness of the evil that lurks in the Freudstein house, and she never shies away from telling Bob to get the hell out while he still can.

As things usually go in these types of movies, Mae is right, and for approximately 80 minutes, the Boyles, their oddball, yet strikingly beautiful babysitter Ann (played by Italian horror favorite Ania Pieroni), and assorted townspeople fall prey to Dr. Freudstein, who instead of living in your mind and pointing out phallic symbols everywhere, lives in the basement. Somehow, Dr. Freudstein manages to go undetected while he very messily murders the real estate agent Mrs. Gittelson (played by Dagmar Lassander) and Ann. Dr. Freudstein doesn’t even have the common decency to kill exclusively downstairs. Rather, he often delights in butchering folks upstairs. Such is the life of a 150-year-old quack who needs living flesh to sustain himself.

Of course, The House By the Cemetery is gory, but it’s not as gory as its predecessors. The decapitation of Ann and the evisceration of Dr. Boyle’s throat are handled as gently as a Ndamukong Suh foot stomp after a dead ball, but The House of Cemetery does make an attempt to distribute its horrors more broadly. Yes, there is a ridiculously bloody scene involving a very vicious bat that latches onto Dr. Boyle’s hand, but there are also the tense scenes involving Ann, then Bob’s confinement in the cellar. Again, as with the buried alive scene in City of the Living Dead, certain moments in The House By the Cemetery prove that Fulci could do bloodless suspense and do it well.

The relative lack of gore and gristle aside, the other glaring difference between The House By the Cemetery and its peers is its lack of apocalyptic trappings. Unlike the sorta Lovecraftian pair of City of the Living Dead and The Beyond, both of which deal with forbidden tomes and doorways between this world and the world of the dead, The House By the Cemetery is a tighter, more contained narrative that focuses on one dead guy and one world. Even the film’s payoff, which can be read as a now dead Bob joining the afterlives of Mary (played by Teresa Rossi Passante) and Mae Freudstein (woops…surprise!), lacks the depressive nihilism of the two other “Gates of Hell” films.

So, let’s quickly review: The House By the Cemetery is less gory than its brothers, slightly more circumscribed in its story, more suspenseful, but less musically interesting (Walter Rizzati, not Fabio Frizzi, is the man responsible for the music and the product suffers because of it). Also, according to many critics, it’s less original than either City of the Living Dead or The Beyond. While those two films weave Antonin Artaud-inspired tales of surreal cruelty, The House By the Cemetery presents an amalgam of earlier and more popular American horror films such as The Amityville Horror and The Shinning, while Dr. Freudstein is both Dr. Frankenstein and his creation all at once. Ultimately, The House By the Cemetery is more…uh…digestible than its peers, but also less compelling. The House By the Cemetery is the sort of film one would expect to wind up on a zombie-theme DVD multipack, but just not with a whole load of black and white films from the ‘40s and ‘50s.

This then is the way the unofficial “Gates of Hell” trilogy ends—not with a bang but with a so-so shrug.

One thought on “Gates of Hell Part III: Fulci’s The House by the Cemetery”