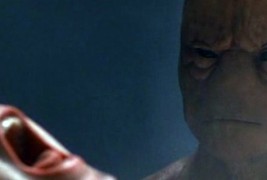 Aliens have most often been portrayed through literature and film as ominous creatures whose interests lie in world domination, water thievery or devouring us for dinner. The typical thought is that an extraterrestrial creature from outer space (other than E.T.) will come and dominate or even partake in the horrifying examination act of the anal probe. Images of the slim, slender bodies of greys tormenting us in film have propelled many into sleepless nights. Communion, Fire in the Sky, Signs, Dark Skies and more have prepared us to be on the defense in the event of any sort of alien arrival.

But what would alien life really look like? And where did our first frightening depictions come from?

These questions and more were recently explored after research on the subject for a Life on Other Planets Panel that was held at the mighty Eljay’s Books in Pittsburgh, PA. Four panelists with different backgrounds were chosen to discuss the nature and origin of life on other planets. Some of that fascinating discussion appears below….

In 1893, one of the first mentions of the greys in America may easily be traced back to H.G. Wells in his obscure article, Man of the Year Million. In this work, Wells ventures into a physical description of human evolution by the year one million. When we reach this evolutionary future, humans will have slim, slender bodies, large heads that allow brainpower for technological advancements and will essentially absorb nutrients as food. Sound familiar?

Just five years later, in 1898, Wells wrote the groundbreaking War of the Worlds, which portrayed Martians to be our enemies in war and forever stereotyped them as malignant invaders. Nearly 40 years later, broadcaster Orson Wells used H.G. Wells’ story to terrify his listeners with one of the greatest radio hoaxes in history, causing enough fear that aliens were invading to cause the population to react with chaos and hysteria. Only a decade after this radio incident, public claims began to rise of sightings of unexplained aircraft, lights in the sky and sometimes contradictory abduction tales with mixed and blurry details of the physical acts behind the scenario.

As far as classifying alien types, there are allegedly two main groups that would occupy Earth. The first and most common type is the aforementioned greys who have smooth gray skin, slender bodies and large heads. The second group is known as the reptilians, which are speculated to currently live on Earth and blend in with us, to run for political office, breed with humans and have sexual encounters with their abductees. While a recent Huffington Post polls claim that half the population believes in life on other planets, many are less likely to believe that they are actually here on Earth haunting us every day. It would take a high level of intellect to develop methods of transportation that could reach our planet, as well as an in-depth understanding of whether or not our germs, gravitational field and atmospheric conditions are suitable for alien life.

Do you believe in life on other planets?

During the previously mentioned panel event last month, Jason T Swinchock began with ensuring that given our vast universe, there is an incredibly high probability that there is intelligent life on other planets. Given the right conditions, those beings could resemble us but with some varying physical structural differences. Next up, I considered that meteors and asteroids have frequently impacted our Earth, while also sending biological matter back into the universe (which can survive in space for an estimated 30,000 years). If all conditions were correct, we could seed life on other planets or could even be the real “alien” product on Earth, delivered from elsewhere in the universe in past asteroid matter. Matt Demas speculated that aliens are already among us and that their presence may very well be covered up, perhaps due in part to secrecy or to contain any possible public hysteria. Chris Rickert gave her spill on the topic by considering “ghost” energies and the cool possibility that perhaps it’s not a ghost that is causing the chills on your spine, but electrical pulses of some alien being. While this is just a general overview of the panel highlights, the full video and teasers can be watched here:  http://www.youtube.com/user/SolsticeNightSky.

What do you think about extraterrestrial life? Is it a fascination that keeps you staring at the stars or is it a horror that you just cannot bear to consider?  Feel free to share your opinion through the inbox of SolsticeNightSky Productions & Radio on Facebook. 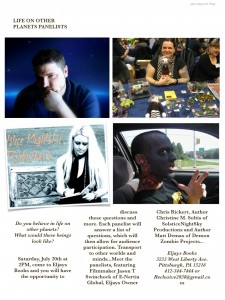