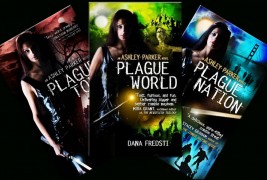 Today, Titan Books unleashed Plague World: An Ashley Parker Novel, the third book in author Dana Fredsti’s rollercoaster ride of a zombie trilogy.  Earlier this year, Ravenous Monster offered fans and fellow zombie enthusiasts the chance to submit a piece of original zombie-centric flash fiction to be evaluated by our esteemed panel of judges with a chance to win the forthcoming Plague World novel and the entire Plague trilogy for our First Place winner.  Alas, Horror Fans, we’ve picked our winning stories and, besides earning the fantastic books, these creative horror fans get their winning stories published…right here…right now!

First Place: “They Only Come in the Daytime” by Josh Christian

Brother says they only come during the day. “Even the dead need to see.”

Could be, we were never attacked after dark…except once when there was some of them left from the daytime. I thought we were goners, hiding in the attic, while Pa tried to keep the doors from being smashed in. Brother took Pa’s hunting knife and tied it to the end of a broomstick, climbed onto the roof and started spearfishing. I was so afraid.

Brother was so brave. They got into the house. He went downstairs and helped Pa fight ‘em. I wish Pa was still with us. I wish I was as brave as Brother.

Brother wanted to check the neighbor’s house. I told him no. It was too dangerous running over a mile through the woods. He told me to hide in the attic if any of the ‘rotters’ came, then left.

Brother’d been gone a long time and the sun was setting. I saw a lone rotter come out of the trees. I hoped it would get dark before the rotter found our house and it would wander off in the darkness.

The attic window didn’t face the woods, so I couldn’t see. As the sun went down, I hoped Brother would get home. Then I heard uneven steps on the porch. The front door banged shut. Scared, I peeked out of the attic. Brother didn’t look right.

Brother always said they only come during the day, but he came at night.

Second Place: “What a Display!” by Casey Douglass

Small shards of glass cracked and popped beneath Ben’s heavy work boots. He bit his lip. He could have looted some nice soft trainers but he valued his toes, and these boots were great for stomping zombie heads.

The gloom in the sparsely outfitted jewelers gave everything an other-worldly sheen. Diamonds and gold glittered and twinkled as his weak torch-beam played over the display cases. His growling stomach reminded him that he couldn’t eat metal.

Something crashed and thumped behind him. He spun around looking for an escape route. There was none. The first shuffling meat bag rounded the door that led to the back room, then another, and another. Too many.

Ben heaved open a display case and squeezed himself inside. He pulled the thing shut just in time for the first zombie to snarl and thump its bloody hands on top. He eyed the logo for toughened glass above him. His hunch was right. Well, they were designed to keep out robbers with bricks or baseball bats, right? He hoped it would be zombie-proof too.

He squirmed onto his back and looked up, a cacophony of guttural yowling and palm-bashing shaking his new home. Must be at least a dozen now. A zombie pressed its face to the glass above his, its black teeth squeaking against the barrier, its lips leaving a long white smear.

He was surrounded in a see-through coffin. His heartbeat shook his body. He switched off the torch.

It was on the bus with me. I knew it was infected. No one else did. The head swells just a little, making them a bit bobble-headed.  You can also pick out the early infected by the way they walk. It is just a bit off-balance. They seem to lean forward like they are charging where ever they go. The strangest effect is a preoccupation with discussing feces while they can still speak. They have a tendency to focus on it and include it in every discussion.  The CDC thinks it is due to organic deterioration creating a Tourette syndrome-like effect. She was probably going to turn right here on the bus. She was regaling her seat-mate with a description of the consistency of her morning movement.

The early signs were not released to the general public, so no one on the bus knew what was about to happen. The Z-Marshal system was created. We patrolled streets and public transit looking for the symptoms. We also had response units when there was an outbreak. The undercover officers worked best.

I could see the small seizure she was having as the virus pushed her over the edge. I stood and approached. Her eyes were becoming rheumy and glazed. Drool was starting to spill from the corners of her mouth. I flipped open the modified trench tool I kept in my cargo pocket. I built up momentum by speeding up to a trot. I took her head cleanly.