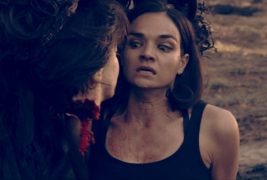 Spring has sprung, and with it comes a favorite holiday. Can you guess which one I’m talking about? No, not Easter, but it does have to do with grass. Of course, I can only be reefer-ing (see what I did there?) to the much-loved, much-celebrated 420!

I know most of you already have your traditions in place, but I’m here to tell you about a film that you may want to add to your holiday watching. You may already be familiar with such gems as, The Evil Bong (2006) and the classic Reefer Madness (1936), but I have a new one for you. Today, I’m going to tell you a little bit about writer/director Dylan Reynolds’s 4/20 MASSACRE — a tale of a group of young ladies who decide to celebrate a birthday secluded in the woods on the sacred day. What could possibly go wrong? Get comfy and stick with me while I let you know if 4/20 Massacre left me with the need for weed…or if it made me want to just say no.

Essentially, 4/20 Massacre starts off with two good ol’ boys walking, trying to find the elusive “pot of gold” hidden in a remote area of a forest. Along their way, they chit chat and we’re given a bit of comedic relief with their goofy banter as they find what they’re looking for. Once they find what they’re looking for, they fill their packs full of green and are seemingly happy. That is, until one of them decides to sample the goods. That’s when we see that something, or someone, doesn’t like folks touching their stash. Let the massacre begin! Roll the opening credits.

After the credits, we’re introduced to our group of weekend partiers. We have Jess (Jamie Bernadette), Donna (Stacey Danger), Rachel (Justine Wachsberger), Michelle (Marissa Pistone) and Aubrey (Vanessa Rose Parker). The ladies are a likable enough group, with personalities that range from badass to hardcore stoner chick.

The group rolls into the forest and parks their vehicle, as their final destination is only accessible by foot. They unload their gear, only to find Donna smoking out in the back of the car. They start hiking the four miles to their campsite and everything seems normal until a forest ranger drives up from out of nowhere and stops them. Ranger Rick (Jim Storm), appears to be a little strange, but he tries to be helpful in warning the ladies about staying on the trails and paying attention to the posted signs, and giving a stern warning to stay out of the hills as there’s been trouble with guerrilla growers in the area. He tells them about missing campers as well, and in return, the group tells him probably more than he needs to know about where they’re headed. He gives them a grubby map to follow and drives off.

The pace starts to kind of pick up once the girls continue along the trail. While they’re trying to figure out if they’re lost, a terrified familiar face runs out of the woods with a backpack and tells the group that there’s a killer demon or monster in the forest. He gives the group the backpack, gives them a “Crazy Ralph” kind of warning and runs away, but doesn’t get too far. The group considers reporting the guy and the weed to Ranger Rick, but then think better of it. The trek to the campsite continues.

Along the way, they run into yet another random good ol’ boy running around the woods with a shotgun. The guy and the girls exchange some angry words, and eventually Donna the Stoner decides to resolve the conflict by giving him some of the newly acquired goodies and a lesson in rolling a blunt. Always good to know. Shotgun Guy goes on his merry way, and our group moves onward. Once they reach the campsite, they set up camp, have a feast of champagne and hot dogs and crank the boombox. Oh, and there might be a little girl-on-girl sexy time thrown in. Party.

Essentially, once we reach this point, we finally start seeing whatever or whoever is watching the woods take revenge on those who’ve touched the precious and the blood and guts begin to flow. Anyway, I think I’ve given you enough of an idea of the story, and I don’t want to give anything else away. I will tell you that there are quite a few twists and turns thrown into the rest of the story. A few surprises happen that keep things interesting right up until the end.

4/20 Massacre is worth your time. It’s a fun watch that mixes comedy and over-the-top gore without trying too hard to do either. The acting is well done, and the story is both entertaining and enjoyable. The score is well-suited, and I appreciate the overall grindhouse feel that this movie has. Anyway, put 4/20 Massacre in your pipe and smoke it when it’s released on April 3. 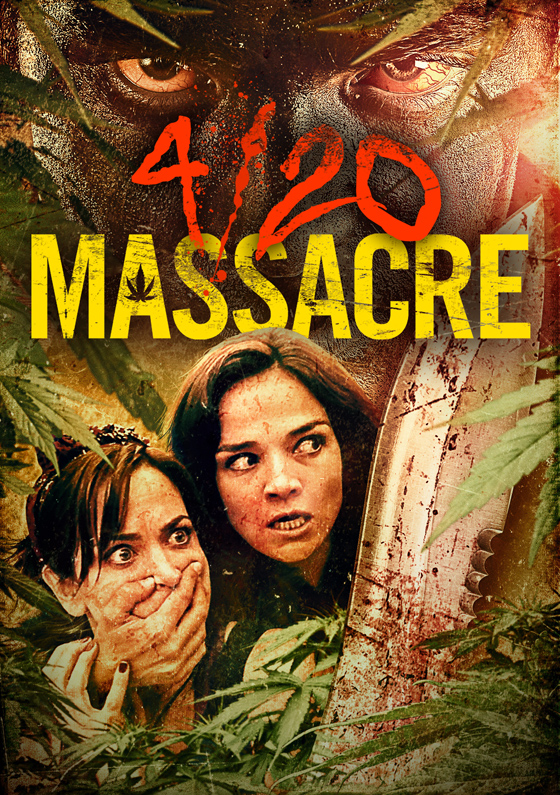