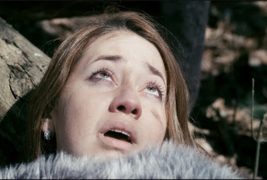 In fact, had this been All Girls Nanosecond, it still would have been a nanosecond too long.

Written and directed, if you can call it that, by Lou Simon, this horrible horror story suffers fools from the get-go. Four former high school classmates get together for a weekend in the mountains, ostensibly to bond. A fifth, Annie (Sharron Calvin), comes along as friend of the group’s “outcast,” Nancy (Jamie Bernadette).

Nancy’s the tough one: She smokes, swears and was once the bitter enemy of Daniela (Katie Carpenter), who organized the outing. They haven’t seen one another for years, but hey, why let that prevent a fun reunion, right?

Together with Stephanie (Karishma Lakhani) and Gem (Gema Calero), they hit a camp, do a little zip-lining, learn about a curse on those who enter the woods and then … ding ding ding! Yes, they enter the woods.

Almost immediately, they’re lost. And they bicker. And they hear whispering in the trees. Annie falls gently onto a fallen twig that somehow pierces her leg. Not to worry, they stumble upon the proverbial cabin in the woods, where they hope to spend the first night.

Now mind you, it’s been a day, but they’re starving. They find some peanut butter and share their sustenance. All to no avail for Annie, who is the lone black woman in the group. And in being so, that means she’s the first to go, of course, somehow dying overnight from that vicious twig wound.

Stephanie wanders off and succumbs to an avalanche of leaves, evidently. (No, I’m not making this up.) And Gem …

Oh poor Gem. Let’s start by assuming the actress Gema is called Gem because it was easier to remember her name while “acting.” Anyway, she somehow contracts frostbite and Nancy decides to amputate her fingers. Now, bear in mind they’d encountered a little rain to this point but no hint of frigid weather. It’s not like you can see their breath when they talk. And did I mention none of them are wearing anything resembling a heavy winter coat?

But frostbite it is, so NOW it’s time to cue the snow.

Let’s dispense with details. I mean, it’s not as if the filmmakers paid attention to them. One classic scene, for example, shows stock footage of a bear in the woods. Cut to Nancy running away from said invisible bear. Again, I am not making this up.

But we digress. Gem is soon dispatched, leaving us with our two mortal enemies — Nancy and Daniela — to battle one another and the curse.

All Girls Weekend boasts awful dialogue, awful editing, awful direction and, accordingly, awful acting. Transitions are equally awful. When day turns to night, we get a stock shot of the moon. How original.

The story itself is beyond awful. A weekend. Yet these girls are running around in survival mode, seemingly desperate for food, for water, for … LINE!

Yes, this review is a tad harsh. Simply mean, perhaps. But I want my 85 minutes back.

And while we’re at it, I’m quite sure anyone connected with this monstrosity would like their reputation back. 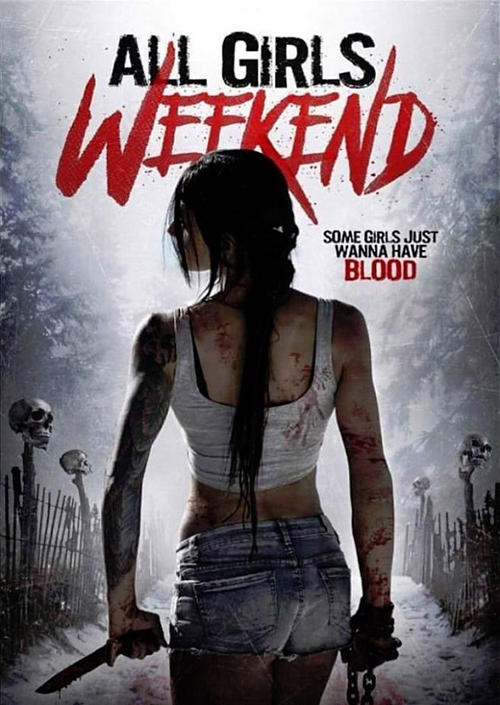