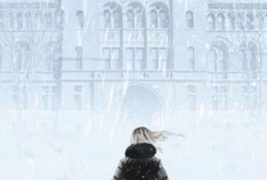 School is hell, winter is hell, loneliness is hell. In director Osgood Perkins’s The Black Coat’s Daughter (previously entitled February) this hell is so close to being literal that blasphemous flames singe the screen. However, if you’re expecting The Black Coat’s Daughter to be all gallivanting creatures of the night in kitsch makeup, you’d be dead wrong. This quiet, slow burn of a film is more claustrophobia than cheap jump scares. Set in an all-girls’ Catholic school in upstate New York, The Black Coat’s Daughter focuses on two pupils—the senior Rose (played by Lucy Boynton) and the freshman Kat (played by Kiernan Shipka). While Rose is your typical private school girl gone wild (she’s secretly dating a townie and is carrying a weeks-old secret in her womb), Kat might as well be from another world. With pallid, sickly flesh and a pair of eyes ringed by dark circles, Kat looks like the living dead. Or the living possessed, rather.

Like Jack Nicholson in The Shining, Shipka’s portrayal of Kat makes the character feel hinky from the start. Maybe it’s the film’s reliance on gloom, or maybe it’s Shipka’s natural teenaged angst, but Kat’s quick spiral into mental oblivion is the furthest thing from unexpected. Then again, at certain moments the film hints that Kat may have done the big nasty to her never-there parents, which would turn the central question of the film from “How did this happen?” to “Why didn’t anyone see this coming?” 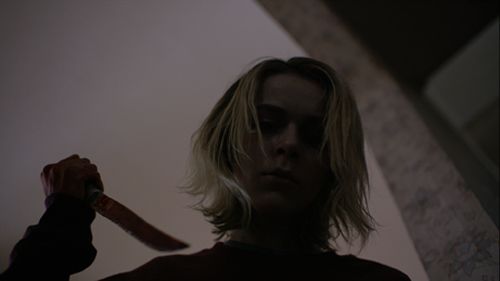 When Kat is forced to stay overnight at the school thanks to her absentee parents, the school’s head master puts Rose in charge of Kat’s wellbeing. Neither is too happy about the arrangement. After all, it’s the beginning of winter recess and nobody likes staying after school when there’s no one else around. For the majority of the film, isolation is the chief demon causing all the nightmares. Rather than ghosts or goblins, Perkins calls upon leaky faucets, shadowy corners, and the chill of a quiet room to unsettle the audience.

Kat and Rose’s relationship is a source of tension, as well. Rose, who just wants to get rid of Kat so she can spend the night out on the town, tries to frighten the mousy freshman by telling her an urban legend about how the school’s female staff members are all hairless Satanists. In particular, Rose tells Kat that a former student caught the naked schoolmarms down in the basement doing weird rituals around the main furnace. Kat takes the story to her black heart, but it doesn’t scare her.

Unbeknownst to Rose, Kat has a secret admirer. In several flashback scenes, a furry, rabbit-eared shadow is seen stalking Kat. It watches her bathe and calls her on the telephone. It tells her about the basement and it reminds her that her parents are not coming. More importantly, it reassures her that she can stay at the school forever. This engenders love between the two, and no moment in the film shows this more clearly than when Kat begs the horned fur ball to stick around during an exorcism. It doesn’t. The monster not only resembles Frank from Donnie Darko, but it has the same prescience and temperament as well.

[Spoiler ahead] While Kat and Rose try to make it through the night, a separate story involving Joan (played by the ubiquitous Emma Roberts) and a couple of shell-shocked parents (played by James Remar and Lauren Holly) develops. After seeing Joan all by her lonesome on a wintry night, the father decides to pick her up and drive her to her stated destination (the fictional town of Portsmith). The town of Bradford, which is home to the very same Bradford school where Kat and Rose are students, is along the way. At first, the audience is meant to feel uneasy about the father. First of all, he’s got a bad habit of talking to Joan while she’s half-naked. Second, he asks her point blank if she believes in God. Third, he tells her that she looks just like his daughter. When he hands Joan his daughter’s yearbook photo, the audience is hit with the realization that the man’s daughter is Rose and she’s been dead for nine years. She was beheaded along with two other women. Joan, who is shown to be an escaped mental patient who managed to steal another woman’s identity through murder, is noticeably unperturbed by the whole thing. Well, that is until she gets carsick near that particular school in Bradford.

A brilliantly told story in the same vein as The House of the Devil, The Black Coat’s Daughter is yet another example of why indie horror is the best thing going in American cinema. Although the film drags unnecessarily at times, Perkins should be commended for developing a moody thriller that feels shockingly realistic, even despite its supernaturalism. It might be difficult to see now, but when this is no longer the case, do your guts a favor and digest this ghoulish morsel.