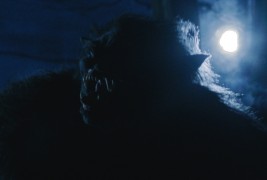 Somethin’ is kickin’ up dust in the entertainment world, pardner. It seems that inch by inch, the Western is starting to crawl its way out of the grave and back into the public consciousness. Sure, it’ll probably never reach the heights it did in the ‘50s and ‘60s when it seemed cowboys ruled the world. But horse operas are starting to be seen again—on the small screen, where AMC’s Hell on Wheels holds court, and on the big screen, where coming movies like Tarantino’s The Hateful Eight and the highly touted The Revenant are gaining a lot of hype.

So the time seems to be ripe for a film like Blood Moon. A very popular sub-genre in the fantasy field is the “Weird Western”—a mixture of Western settings and characters with elements taken from horror and fantasy. Blood Moon is a small-scale, budget-conscious flick that fits easily and comfortably into this classification. It brings us a bloody tale of skinwalkers and stagecoaches, outlaws and otherworldly beings. And it might just set a template for how to do this kind of story in the future.

There’s also a crying need for horror films that focus on atmosphere, character, and practical effects. Blood Moon also satisfies those cravings. Don’t look for the typical CGI monsters and teenage knuckleheads here. The film’s makers don’t reinvent the wheel, but they make sure the wheel they’ve got works real well. Blood Moon is not the only Weird Western out there, but it emerges as one of the best.

First off, it takes the Western aspects of the story dead serious. The wardrobe, the buildings, even the characters’ faces look authentic (and in several cases, authentically grubby). When I found out this movie was filmed in England, you could have knocked me over with a feather. Apparently, a very good quality Wild West town was built miles outside of London and fills in very nicely for the raw-boned Colorado frontier towns we see in Blood Moon. A lot of the settings could have done double duty for an episode of Gunsmoke.

The horror aspects are also handled seriously. This movie is likely not gore-soaked enough for those who like only mayhem and torture in their fright flicks, but that’s not the audience for this, anyways. Believe me, there is blood and nastiness here to spare, inflicted by both humans and monsters. Speaking of which, the monstrous wolf-beast that stalks our characters is sparingly shown for the most part, but when the climax comes, you get a nice long look at it. And if you dig ‘80s-style practical monster effects, you won’t be disappointed!

The plot is simple enough. Our story begins with a stagecoach traveling through rugged Colorado countryside on the way to the town of Lassiter. The coach is running behind when it gets stopped by a lone man. This is the soft spoken but rather forbidding Calhoun, whose horse unfortunately had to be put down after it accidentally broke a leg. The coach driver reluctantly allows Calhoun to board. He joins the meek preacher Father Dominic, the young English reporter Henry Lester who is looking to write about “the Wild West,” the very attractive widow Marie Cooper and the newlywed couple of Jake and Sarah Norman. Jake is a lawman who is on his way to Lassiter to become a deputy there. These characters will be the core or our story.

In Lassiter itself, trouble is brewing. The town bank is held up by Hank and Jeb Norton, a bloody pair of outlaw half-brothers who prefer to shoot first when trouble comes up. They leave a scene of mayhem behind them and head off into the brush. That brings the young town marshal Wade on their tail. But before Wade heads out after the killers, he’s joined by the Navajo woman Black Deer, who warns him that this night will bring a “blood moon” when Native American monsters known as “skinwalkers” go on the prowl. Black Deer is an interesting character—an attractive woman who can drink, curse and fight like a man, but who also is regarded as a “witch woman” by the local tribes. Wade and Black Deer head out to a lonely outpost known as Pine Flats, where it’s likely the Nortons will try to hide.

Meanwhile, the stagecoach is running behind and night is coming up. The driver Lloyd and his shotgun rider reckon they should stop somewhere instead of pushing straight through to Lassiter. They choose…where else? Pine Flats, a ghost town with a hostel run by one stubborn old-timer. The coach pulls into Pine Flats, but the proprietor Charlie is nowhere to be found. At first. Eventually, the group stumbles upon his mangled remains. Most of Charlie has been torn apart and eaten. “What in God’s name did that?” wonders Jake. “God was lookin’ the other way when this happened,” answers Calhoun.

The body doesn’t have the telltale signs of a cougar or grizzly attack. Calhourn figures a pack of starving wolves might have gotten Charlie. The traveling party plans a simple burial but just as Father Dominic prepares to read the service, shots ring out and death comes calling. The Nortons have arrived.

They aren’t playing, either. They get the drop on the stagecoach party and Calhoun immediately realizes that surrender is the only way to survive. Now we find out just how unsavory Western outlaws can be. Jeb in particular seems real eager to cut and shoot human beings and he is particularly attracted to Jake Norman’s innocent young bride Sarah. Older brother Hank is the brains of the outfit and marginally less inclined to violence…but not by much. There are some very hairy moments when the prisoners are being psychologically tormented by the Nortons and only quick thinking and play acting keep them from being wiped out.

Calhoun realizes that as nasty as the Nortons are, they aren’t the real threat. He knows now that a skinwalker is stalking Pine Flats and tonight is the night of a blood moon. Before long, this is confirmed in the bloodiest manner possible. Now it’s not just citizen vs outlaw…it’s man vs monster! Can he outwit both man and beast before it’s too late? Can Marshall Wade and Black Deer tip the balance…or will they face their own demons before they even get to Pine Flats?

This is a story of horror and survival that’s pretty simple on the face of it but with some nice twists and turns. A lot of the characters have their own secrets and quirks to be revealed. For example, Hank Norton thinks Calhoun might be related to a tale he heard, the story of a preacher whose family was killed by outlaws. The preacher turned against God and swore vengeance. Word has it that he struck a deal with the Devil to become the fastest gun in the West…among other things. Hank wonders if Calhoun might know anything about that, but Calhourn, in the fashion made popular by Clint Eastwood, says little.

The acting here won’t be nominated for any Golden Globes but everybody does a fine job. Anna Skellern as Marie Cooper steals every scene she’s in. Talk about a cougar, she’s the essence of an attractive older lady who knows how to handle herself in every situation. Some of her wisecracks aimed at the Nortons are particularly biting. You get the impression that Calhoun is quite taken with the widow woman, but working hard not to show it. Speaking of Calhoun, Shaun Dooley does fine as the mysterious gunfighter. Amber Jean Rowan as Sarah Norman seems like the clichéd young pioneer girl at first, but later reveals some secrets of her own. Gruff voiced Corey Johnson as Hank is a rotgut Western owlhoot to remind you of Jack Elam, constantly spitting on the floor.

The other star of the show is the skinwalker, which is created with animatronic effects and make-up. You don’t see the whole creature until the end. It resembles a cross between the Incredible Hulk and the werewolf from The Howling. There’s also a very effective “transformation” scene where you see the passage from man to monster. The gore effects are also done practically. I don’t think CGI was used once in the movie and if it was, it was too subtle for me to pick up. Blood Moon is not an insanely violent movie, but death comes quickly and bloodily and you find out pretty early it can strike just about anybody at any time.

We might be entering the age of the Weird Western in popular entertainment. If that’s so, Blood Moon does a pretty good job of showing how it might be done. It’s an entertaining mishmash that makes the most of a limited budget, with a script that has some thought to it. The end seems to hint at a sequel and I wouldn’t mind seeing that at all!

Make sure you’ve got at least one silver bullet when you travel the prairie by night, friends…. 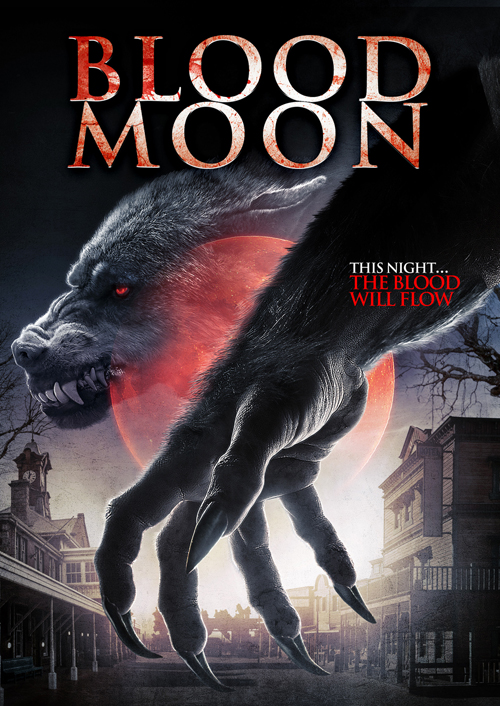